Tailwinds Past Florence by Doug Walsh

Their love spans centuries ... will it survive a journey around the world? That is the question being asked in Tailwinds Past Florence, a contemporary romance by Doug Walsh that also has a magical twist to it. Please enjoy this excerpt before you download your own copy. Follow the tour to see even more excerpts and reviews. Please leave Doug comments and questions along the way. And remember to enter the giveaway!

Please note that affiliate links are present within this post. Should you make a purchase through one, I may earn a small commission to help support my websites at no additional cost to you. 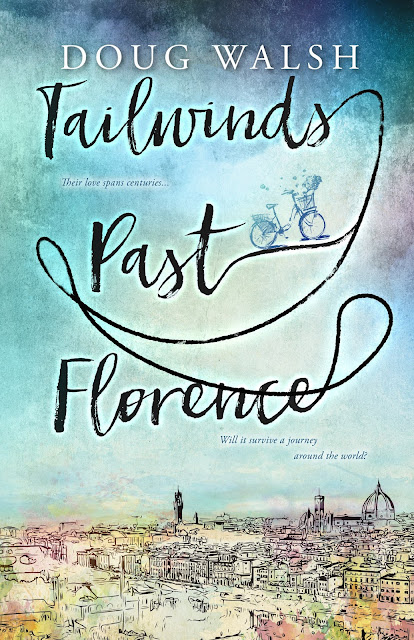 After getting blacklisted from the venture capital industry, twenty-nine-year-old Edward Vaughan will do anything to avoid telling his wife what happened. Even if it means agreeing to her dream of bicycling around the world. Kara, tired of being married to a workaholic, was readying for a divorce. Now, she’s packing bags of a different kind. Together, they pedal away from Seattle, headed east on the open road across America, Europe, and beyond.

Theirs is a decision that reverberates across centuries, shattering a continuum that bound their souls throughout time, and traps Edward in a battle with a past life over an eternal love.

As the miles roll by, and the couple's sordid secrets begin to surface, the couple encounters several men plucked from history, each one a vessel of Edward’s soul in a prior life. Of them, a 19th century art dealer proves dangerous, believing Kara is his ticket back to the past.

Tailwinds Past Florence is a contemporary love story with a magical twist, landing readers in the saddle of a global bicycle adventure.

Kara clutched her chest as her breathing returned to normal. It was one thing not to know why he wasn’t at work, it was another for him to be hiding behind the door. What the hell, Edward. She bent to pick up her dropped keys. “You’re home.” It came out more statement than question.

“Long story. Why didn’t you cover your eyes?”

She raised her hands in answer. They held a gym bag, purse, keys, and an envelope she’d somehow forgotten about in the commotion. “You didn’t give me any time,” she said. Then, noticing the map—her map—and the champagne, asked, “What’s all this?”

“This,” he said, grinning like a schoolboy about to receive his first kiss, “is a change of plans.”

Her mouth fell open as she processed what she was hearing. Kara spent months asking him to take time off, hoping he’d see how important the trip was to her, practically begging. She tore the map down after the holidays, after diplomatic overtures had failed. She’d been holding a bomb ever since, delaying the inevitable. Now, with her self-imposed deadline having come and gone, he wanted to do it.

Today? You’ve got to be kidding me, she thought, clutching the envelope, dumbstruck.

“I thought you’d be excited.” His smile drooped.

“You still want to go, right?”

Did she? It’d be an incredible adventure, a badge she’d wear the rest of her life. But, to Kara, cycling around the world was a means to an end. Her gaze drifted to the map, the promise held within its Sharpie itinerary. The promise of change, of resurrecting the man she married, her best friend and lover. For three years, it’d be just the two of them, reforging their bond against the anvil of the open road. And if her plan didn’t succeed, if he returned to his workaholic ways when it was over, she’d at least know she tried.

Tailwinds Past Florence is available at the following locations: 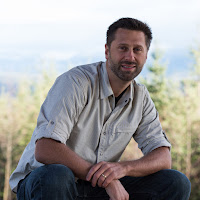 Doug Walsh made his fiction debut with Tailwinds Past Florence, a road-tripping love story with a magical twist, inspired by the two years he spent cycling the world. The novel was a prizewinner in the PNWA Literary Contest. He's also authored One Lousy Pirate, a travel memoir, and over one hundred officially-licensed video game strategy guides. Travel guides to fictitious places, as he likes to call them. Originally from New Jersey, he now lives and plays in the mountains of western Washington.

Doug Walsh will be awarding a $25 Amazon or B/N GC to a randomly drawn winner via rafflecopter during the tour.

a Rafflecopter giveaway
Posted by Andi at 8:32 AM