'Secrets of an Aztec Temple' by Paty Jager Excerpt Tour 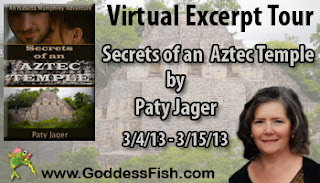 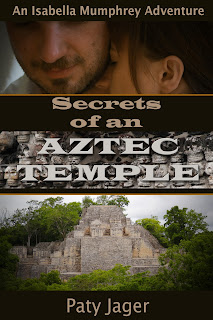 Secrets of an Aztec Temple
by Paty Jager

Revenge is not always sweet…

Isabella Mumphrey can’t leave a puzzle alone. This time she attempts to use her anthropology knowledge to uncover who is stealing priceless artifacts from an Aztec Temple in Mexico City. The discovery will certainly prove her worth to the World Intelligence Agency.

Tino Costantine is in Mexico City, too. He has infiltrated a drug lord’s organization to find enough evidence to not only prove the man’s illegal activities, but to bring him down for numerous deaths. Namely those of Tino’s family.

But when the love of his life, Isabella, strolls into his enemy’s home, Tino’s challenged by the choice of saving her or fulfilling his revenge.
~~~~~~~~~~~~~
Read an exclusive excerpt:

Garza’s teeth curled back in a feral smile as he nodded his head. “I like your thinking, but I wish them alive. I need to set some rules the two pendejos need to learn.”
“Does Cezar know where they are?” Garza’s right hand man had been missing for the last hour. Tino suspected he was gathering information on the whereabouts of the brothers.
“Cezar is escorting a special guest here. But Hector has been following the two and called to tell me he lost them in the colonias.”
“I’ll start there.” Tino turned to leave.
“Rodriguez. If you cannot bring them in, do not show your face here again.”
The threatening tone punctuated what he already knew. If he didn’t bring the Alvarez brothers back he would be hunted down and killed because he’d witnessed and participated in illegal activities.
“I will be back with your guests.”
Tino exited the office congratulating himself at having made it to Garza’s inner sanctum, but now realized there were two more doors that would need breeched before he could find the evidence to bring in the Drug Enforcement Agency.
His mind wandered to how to find the Alvarez brothers and make his way up in status to gain entry into the room behind the bullet-proof door. He stepped out onto the front portico. Cezar walked alongside a woman who carried herself in a familiar way.
Tino’s blood iced with fear as he recognized the long hair, button nose, and wire-rimmed glasses. Another glance at the woman he knew so well and the ice melted, simmered, and quickened his heart. What brought his querida to the drug lord’s Mexico City compound? Dread, desire, and regret collided as he blindly slammed into a cement pillar. 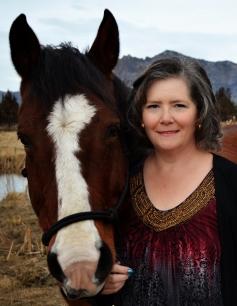 Award winning author Paty Jager is a member of national and local writing organizations. She not only writes the western lifestyle she lives it. With thirteen books and a short story published, she is venturing into the new world of self-publishing ebooks. Her contemporary Western, Perfectly Good Nanny won the 2008 Eppie for Best Contemporary Romance, Spirit of the Mountain, a historical paranormal set among the Nez Perce, placed 1st in the paranormal category of the Lories Best Published Book Contest, and Spirit of the Lake was a finalist in the Gayle Wilson Award of Excellence.

You can learn more about Paty:

Also you can find her on Goodreads:


Paty will be awarding a $5 Amazon egift card at each blog for every twenty people who leave a comment and a $25 Amazon card to a randomly drawn commenter during the tour. Follow the tour for more chances to win!
Posted by Andi at 3:30 AM
Labels: book promo, excerpt, giveaway, Goddess Fish, romance, suspense