Welcome to the virtual book tour for 'Tin Cat' by Misa Buckley! Take a few moments to get to know the author and her book a little better. Thanks for stopping by!


What was the inspiration behind 'Tin Cat'?

The spark was a submission call for geek heroes/heroines. I wanted something contemporary on the surface, sort of a Hitchhikers thing where the normal hero gets sucked into a science fiction world, and I’d also loved The Cat From Outer Space as a kid. Everything merged into one crazy lump, as these things tend to do :D

How much do you have in common with the main character, Amber Gerald?

We’re both sci fi geeks and cat lovers. And we appear to save the same taste in dark strangers…

If you could have an android pet, what would you choose?

I love cats, but there’s something to be said for a K9. I said I was a geek.

Would you consider the company of an android person?

If he was fully functional :D

What are some other projects that you have in the works?

I’m working on a cyberpunk novel at the moment, as well as a series of sci fi shorts for Champagne.

What is the appeal of science fiction for you, whether reading or writing?

The possibilities are endless. No one really knows what’s out there and that unknown is exciting.

When did you know you wanted to become a writer?

I don’t think there’s been a time when I’ve not known. I’ve always told (or retold) stories.

When not writing, what can you be found doing?

Knitting, baking bread, or reading. I read a LOT.

If you could spend one day with anyone, living or dead, whom would you choose?

I’d love to have met Neil Armstrong and shaken the hand of a man who’d walked on the Moon. That would be awesome.
What is something readers may be surprised to learn about you?

Probably the above answer, heh. Most will be surprised that it wasn’t someone else ;)

Science is more fun than most people think it is. 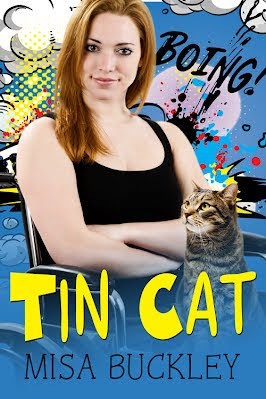 A year after the accident that put her in a wheelchair, Amber Gerald has more or less gotten used to living with her impairment. It doesn’t make a difference to running a comic book store anyway, and the customers have been the best support group she could have wished for.

When she rescues an abandoned cat, Amber has no idea that she’s interfering in the mad scheme of a time travelling bank robber. Or that the man that walks into her store dressed like Blade is about to become her bodyguard.

Between being an unwitting owner of an android cat and falling for a cybernetic bounty hunter, Amber finds her life a whole new level of weird as science fiction becomes a very real factual threat.