Pleasing a God by Christy Gissendaner 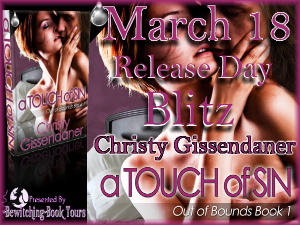 Today, I would like to welcome author Christy Gissendaner to the blog. I posed a tough question to her: How do you please a god?

First off, huge props to Andi for hosting me today. I’m happy to be here! For today’s topic, Andi asked me “How do you please a god?” And I said “Hmm…that’s a hard one.” See, first you have to take a goat to the top of a really large mountain and sacrifice it on an altar of…

Ahem, okay. Just kidding there! The real way to please a god is to find out what’s important to him/her. Gods are human beings too…in a manner of speaking…and want to be loved for more than just their above-average good looks, incredible bedroom skills, and super powers. Everyone needs someone to talk to, and gods are no exception.

Take Sin, for example. The hero in my latest release, A Touch of Sin, is the Welsh god of music and wisdom. His name is actually Taliesin, but seriously. Who wouldn’t shorten his name to Sin? Although he’s only a minor deity, Sin’s creation is the stuff of legends. Arthurian legends to be exact.

As the god of music, there is one thing Sin is really fond of. And that is karaoke. Julie, the heroine, learns this when she drops by to visit her lifelong friend, Hal, who owns a sports bar in her hometown. Both Hal and Sin try to get Julie to join in their love of karaoke, but she wants no part of it. What she does wants a part of is Sin’s oh-so-yummy, incredibly tight…pardon me. I digress.

Back on topic. Julie eventually caves in and join’s Sin for an uber-sexy rendition of “You Can Leave Your Hat On”. (What can I say? Sin must love the movie Nine and a Half Weeks.) This only cements the attraction Sin has for Julie. Opening herself to new experiences, Julie gains the respect and love of a god.

Did I mention Hal and Sin are also ex-football players? Or that they’re shifters? I didn’t? Shame on me. Yes, they met when they played college ball several years earlier. They’ve remained friends despite Hal’s knee being blown during senior year. (Look for Hal’s story in book 2, which I’ve just completed.) Julie has never been interested in the sport, but her guy pals convince her to watch a few games. In the process, she learns much more about both men than she ever thought possible.

I can’t say I blame Julie all that much for being reticent. My husband is a die-hard Alabama fan, while I’m sitting there like “Ooh, nachos!” But, like Julie, I put up with my football fanatic because he enjoys it. (Just keep the Super Bowl snacks coming.)

So, as you can see, it’s not terribly hard to please a god. Just be open-minded, treat them like a “normal” person, and you’re gravy. If you want to find out how Sin pleases Julie in return (wink wink), be sure to check out my latest release! 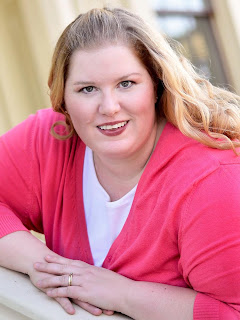 About the Author:
Christy Gissendaner is a romantic comedy author and believes that laughter and love should go hand in hand.

Christy lives in Alabama with her husband and three sons. She’s always hard at work on her next novel, but in her spare time she loves blackjack, karaoke, and anything resembling a vacation! 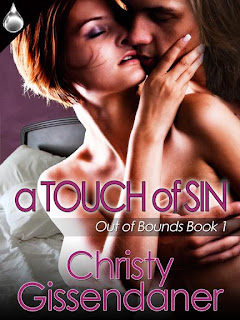 A Touch of Sin
Out of Bounds Book One
Christy Gissendaner

Julie Hendricks is a thirty-year-old workaholic who goes to her friend’s bar to meet him for a drink. It’s her first night out in years, and she envisions a normal evening. Instead, she meets Sin, a sexy karaoke DJ who’s not what he seems, and her idea of normal goes completely out the window.

Sin is actually Taliesin, the Welsh god of music and wisdom. For fun, he helps his old college football buddy at the local bar, Out of Bounds. His buddy’s prim friend captures his attention, and he soon reveals more of himself than he usually does.
Julie's attraction to Sin is immediate, even though she doubts she could ever please a god. When her friend’s business is threatened, Julie must help hunt down the enemy while resisting falling in love with the dangerously intriguing Sin.

This was going to be fun.
The crowd must’ve realized what he was about to do because it suddenly grew quiet, and all eyes turned toward him. Sin removed his earphones and reached for the microphones. “I’ve had a request.”
A cacophony of whistles and shouts filled the air.
“About time!” one of the sorority girls shouted and was echoed by the giggles of her friends.
Sin held up his hand for silence. “I’m going to need a volunteer.”
At least fifty female hands shot into the air. Sin ignored them all for the one hand that didn’t go up. As he had expected, Julie shrank against the back of the couch when his eyes met hers.
Jumping off the dais, he weaved his way through the crowd toward the back of the room. “Come here, Julie.”
Julie’s eyes widened, and she frantically shook her head.
Sin laughed into the microphone. “Don’t panic, Jules. I’m not going to make you sing. Now get on up here.”
She continued to shake her head. “No, Sin.”
Sin decided the audience was going to have to help him. He swept his arm out to gesture toward Julie and spoke into the microphone. “Everyone welcome Jules. She’s a good friend of Hal’s, and this is her first visit.”
If looks could kill and he was mortal, Sin would be a goner from the look Julie gave him. He reached out and plucked her from her seat before she could stop him. He wrapped an arm around her waist and propelled her forward. “Don’t worry. All you have to do is stand there.”
Julie elbowed him in the ribs and spoke through clenched teeth. “I don’t like being the center of attention, Sin.”
He twirled her in a small circle so that she faced the crowd. “Lucky for you,” he paused to throw his arm out in a dramatic fashion to gesture toward Hal. “I do.”
The music started, and he could tell the moment Julie recognized the song. Her eyes grew wide with disbelief, and her face paled.
“You are going to pay for this,” she hissed in warning.
“Relax, Jules. It’ll be fun.”
Sin plopped the top hat Hal handed him on Julie’s head, and the crowd went wild. The noise was deafening. For a moment, he thought she was going to bolt. Instead Julie crossed her arms over her chest and glared at him. “No funny business.”
Sin winked at her and turned back toward the audience as he sang “You Can Leave Your Hat On.” For each item of clothing he mentioned, he teasingly acted as if he was removing it from Jules.
In previous acts, his helper would sometimes become overzealous and actually strip. Thankfully Jules didn’t show a similar inclination. She merely alternated between glaring at the ceiling and at him.
Sin circled her and reached for the buttons of her jacket. Julie tensed as he undid the top two buttons. His fingers brushed the lacy edge of her camisole and desire shot through him. He wanted to have her.
But first he had to get through the next couple of hours. “Don’t look so frightened, Jules. I’m not going any farther.”
“You’d better not unless you want two black eyes,” she warned out of the side of her mouth.
The crowd hooted and yelled for more. Sin nuzzled the side of her neck, enjoying the feel of her skin against his lips. “The crowd is wild for you, Jules.”
“It is not me they want to see, Sin.”
“Maybe not the female half, but the men in the room can’t take their eyes off of you.”
It was true. Sin sensed the envious looks he was being given. He did not feel threatened by their interest. Julie would be his even though she didn’t know it yet.
Sin undid the third button of her jacket, and then a fourth when she didn’t argue. The lapels of her jacket parted and exposed her thin camisole. Even the women hooted with delight as he ran his hands down the sides of her waist.
No one was more surprised than he was when Jules turned and yanked the mic from his hands.
She turned toward the crowd and lifted the microphone to her mouth. “Ya’ll want to see more?”
The crowd went crazy. She turned back to him with a wicked smile. Reaching up with one hand, she removed the hat.
She plopped the hat on his head at a crooked angle and lifted an eyebrow in challenge. “Turnabout is fair play.”