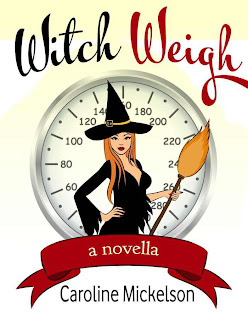 
Book Blurb-
Tessa Von Hellengaard is a real witch. Magical spells aside, she’s snarky and selfish, and the other witches in her silent spell coven are fed up with her. Their plan to reform Tessa involves taking away her magic, saddling her with one hundred extra pounds, and sending her to a weight loss spa. For good measure they call in Liam Kennedy, a charming and sexy fairy godfather, to teach her some manners. Desperate to regain her magic and determined to shed the weight, Tessa soon realizes that protecting her heart from Liam will prove to be her greatest challenge.


“Hey, lady, anyone ever tell you you’re a real witch?”

“More times than you can imagine.” Contessa Von Hellengaard, Tessa to her few friends and many enemies alike, eyed the obstinate construction worker who blocked the path of her sleek black Mercedes.

She wondered how this mere mortal would like being turned into a fluffy skunk. Her fingers itched to work their magic, but she kept them gripped on the steering wheel. She was already in enough trouble with the Upper Hallows Witch Council without casting what they would consider another unnecessary spell. If she was detained any longer she’d be late for her meeting with said council. Tessa knew they were already ticked off enough without her adding another infraction to their precious list.

She leaned out the window. “Remove your overfed self from my way immediately. I need to use this road and I don’t have time for your ridiculous detour.”

“Guess you should’ve used your broomstick then because there ain’t no way I’m letting your car get through here.” He crossed his beefy arms over his chest.

He seemed altogether too amused with his juvenile humor for Tessa’s liking. Broomstick indeed. She revved the motor to let him know she meant business.

He couldn’t say he hadn’t been warned.

She pushed up her black lace sleeves and pointed to the orange and white barricade. “Last warning. Remove yourself and that thing from my way.”

He laughed at her. Laughed. At her.

She narrowed her eyes. This sorry excuse for a government employee was not going to make her late for her meeting. Removing him from her path, she decided, was a very necessary act indeed. She could make the council members understand. But only if she got there on time.

With the tip of her red lacquered fingernail she traced a circle in her palm, silently reciting the spell that would get her what she wanted. A small, satisfied smile tugged at her lips as the man in front of her began to levitate. She stroked her index finger sideways to help direct his ascension. His shocked expression and angry torrent of curse words bothered her not at all. He continued to fuss and kick even after he was hooked on to the high crane by the back of his overalls. At over forty feet above the ground she could barely make out his foul words.

Tessa flicked her finger across her palm with one last quick swipe and waited while the barricade went flying to the side of the road and crashed on a pile of rocks.

She waved farewell to the construction worker as she slipped her Mercedes into drive. The fool would be wise to quit struggling or he’d soon have a painful wedgie.

Silly mortal. He had no reason to panic. Someone would be along to get him down.

Simply reading the blurb, I was drawn to this book and had a good feeling about it. I actually laughed out loud in some places and read through it very quickly. It's a very light paranormal comedy with a touch of romance thrown in.

Tessa is a total self-centered snot who needs to be taught a lesson. I love the symbolism of her putting on an extra hundred pounds overnight, representing all of the emotional baggage that she carries around with her. We have no idea why she is such a brat, other than she simply never learned to really be kind toward others. She has to learn how to be a good person again, in order to get what she really wants out of life. It's a good lesson for all of us!

I found myself thinking of Nanny McPhee while reading this. Every time the kids do something good, Nanny McPhee becomes more beautiful. As Tessa learns her lessons, she has a similar reaction.

I really enjoyed reading this novella. It definitely stands on its own as a single book, but I wouldn't be opposed to reading more of Tessa's adventures in future ones!

About the Author-
Caroline Mickelson loves her family and loves to write. She also loves a good adventure, among her favorites thus far were attending graduate school in a Scottish castle, riding a camel around the Pyramids in Giza, and taking a best-in-a-lifetime road trip to Graceland. Caroline lives in the American southwest with her husband and their four children, affectionately known as The Miracles.

Author is giving away: