Fans of fantasy will want to check out this interview with Claudia Blood as well as an excerpt from her book Company Assassin. Be sure to also follow the tour so that you can find out even more! Remember to leave your questions and comments along the way. Best of luck entering the giveaway! 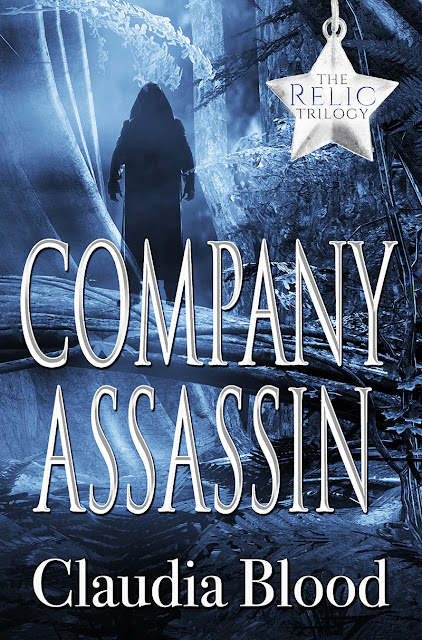 It’s Duff Roman’s eighteenth birthday, but no one is lighting candles.

Turning eighteen in the orphanage on Kalecca means starvation for those who aren’t hired into a Family. Outside the Family compounds lies the jungle. And in the jungle lies death. And Relics—the only real currency on Planet Kalecca.

The orphans are Duff’s family, and he’s sacrificed everything to keep the orphanage running, even his chance to move on. Now, at eighteen, he has no choice but to leave. Without him to bring in extra money, the orphans will starve under the Company’s control. Duff's only chance to save them is to find a spot on an independent crew and hopefully find a Relic to sell.

A seemingly chance encounter with Z, leader of the most feared independent crew, offers Duff his opportunity to score a Relic. And offers Z a chance to relieve the guilt he feels over his past.

But a company assassin has plans to lay waste to Duff's future, and the orphanage as well.
Read an excerpt:

Matilda sat at the table and threaded the needle. The demon alarm still buzzed in the background. She’d given the kids their assignments and tried to act as normal as possible. She didn’t want them worried about Duff or the demons since even the orphanage had company supplied protections. As long as they stayed in the orphanage, they should be fine.

Miss CuddleBug, Sheila’s doll, needed some surgery. Usually this sort of activity would calm Matilda. She checked her nails and saw the distinctive purple at the base that meant her nanites were activated. She took a deep breath and used the mantras her father had taught her.

Peace is within my reach.

“Will Miss CuddleBug be well?” Sheila stood on her tip-toes to see her dolly on the table.

“I’ll get her fixed up.” Matilda stroked Sheila’s hair. Sheila’s complexion grayed. Matilda snatched her hand back. She had to be careful with the little ones when she was this worked up.

Do you have any phobias?
I am afraid of low-heights. It may actually be a fear of falling, because airplanes, hot air balloons, and mountain views are fine. The top of a counter or standing on a rock freaks me out.

I once did a rope obstacle course. Have you seen one of them? They securely connect you with a harness and they have 4-6 configurations of ropes that you have to cross and then you use a zipline to get to the bottom.

The first section was a tight-rope. So picture a single rope strung between platforms twenty feet and then two more ropes at hip height.

That first step was by far one of the scariest things I had ever done. For the record, the zip-line was one of the funnest.

Do you listen to music when you're writing?
Not usually. I tend to sing along which distracts me. I've tried just instrumental or white noise, but I just seem to like the quiet. Or as quiet as it gets in a house with a 8 and 10 year old.

Do you ever read your stories out loud?
Sometimes. I've had classes and instructors that have recommended it. It helps to find awkward language that you don't notice when reading in your head. I do it when something doesn't make sense. I'll read it a few times internally and then read it aloud. I should do it more often.

Tell us about your main character and who inspired him/her.
My main character is Duff Roman. He's just aged out of the orphanage. He's terrified about what the future will bring and is determined to take care of the other kids. He's a bit of a techie geek and has been responsible for the kids in the orphanage for years.
I didn't have a specific inspiration, he came out in the story as the foil I needed for the villain.
About the author:
Claudia Blood’s early introduction to Dungeons and Dragons, combined with her training as a scientist and a side trip into the world of IT set her up to become an award-winning author of Science Fiction and Fantasy.

For her latest release, visit her at www.ClaudiaBlood.com


Short Story give away for newsletter sign up
https://dl.bookfunnel.com/knyz61msub