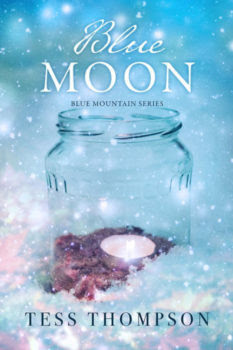 Sparks fly when opposites attract, and so it goes with Ciaran Lanigan and Bliss Heywood. He’s the handsome playboy. She’s the studious executive. And their chemistry? It’s off the charts.

But beneath his charming facade Ciaran is a haunted man. And the more he opens up to Bliss, the less she’s sure she can trust him. Is he really in danger, or is he just a danger to Bliss? Can two people who love with all their hearts face the ever-lurking threats of secrets, lies, and family together?

Blue Moon is the second installment in Tess Thompson’s acclaimed Blue Mountain Series, but may be enjoyed as a standalone novel.
Book Links
Website * Goodreads * Amazon * BN
** My thoughts**
When Bliss showed up at the end of Blue Midnight, I just knew that she had her own story to tell. And let me tell you, it is a good one.
Blythe's little sister has done well for herself in spite of their upbringing, and thanks to Blythe's amazing nurturing skills. But that doesn't mean that she is without her own trials and tribulations. Getting fired and her subsequent accident are fate's way of forcing Bliss's hand and reimagining her life. Her impulsive generosity leads her to also completely change the lives of others she encounters, and it is truly beautiful to watch unfold.
Bliss makes it out to Idaho to spend time with her sister and to regroup. When she meets her brother-in-law-to-be, Ciaran, she finally realizes that she does actually need and want a man in her life. She just honestly never really saw it before.
Ciaran has long been a playboy, never wanting to settle down, and always living like each day could be his last. We do eventually find out why. And Bliss is the first woman he has met who has ever made him believe that he could be ready to settle down.
Peregrine, Idaho seems to be a magical place where dreams of love come true as soulmates finally find each other. I loved reading about the Langian and Heywood families coming together again, as well as all of the secondary characters involved in their lives. I am heavily campaigning for a Moonstone spinoff!
You can read this delightful romantic story as a standalone, but you'll also want to go back and read Blythe's story in Blue Mountain. It is my favorite.
Posted by Andi at 7:37 PM
Labels: book review, contemporary romance