Review of The Cuffing Season by Tawdra Kandle 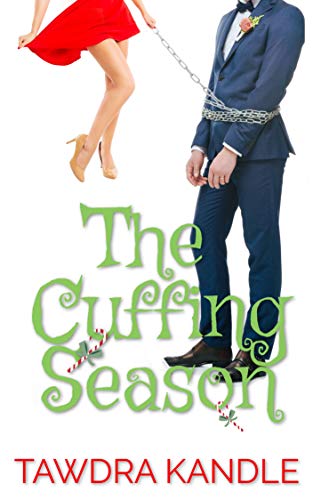 The Cuffing Season (noun) “During the fall and winter months, people who would normally rather be single or promiscuous find themselves along with the rest of the world desiring to be "Cuffed" or tied down by a serious relationship.” The Urban Dictionary

Harry Davis needs help. He’s in a dead-end retail job, when all he wants to do is write the next great American novel. Meanwhile, his best friend Preston is obsessed with finding true love before the holiday season begins, and he’s dragging Harry along for the ride, whether he likes it or not.

When Harry’s mentor suggests that the guys use their adventures to write a series of articles on seeking love from a man’s point of view, Harry isn’t sure about the idea. Still, desperate times call for desperate measures, and this could be the break he’s been seeking.

If the new column goes viral, it could change everything, opening doors Harry’s only dreamed of finding. But will he realize that the real prize is much closer—and more unexpected—than he imagined?
Book Links
Amazon * Tawdra Kandle Website * Goodreads
(affiliate link included)
**My thoughts**
If you need a light-hearted, quick escape from the crazy world and a smidge of holiday cheer, then The Cuffing Season is a great way to do it. OK, so it is a Christmas story and I finally read it around Easter. But it's still one of those warm and fuzzy feel-good romances that made me smile on a dreary day.
Henry is a writer who is working in retail to pay the bills as he waits to find a publisher for his book. He gets the opportunity to take over his friend Vivian's column for several weeks while she is on maternity leave. Her column is about the trials and tribulations of dating, with the belief that you have to kiss Fifty Frogs before you find your prince. (And I highly recommend reading her story in the book Fifty Frogs. It is not necessary to read before this one, though.)
His column is sort of Fifty Frogs with a twist and from a man's point of view. He and best friend Preston are pursuing dating during the Cuffing Season, which is that time in the fall where you try to find someone to be your significant other in time for the holidays. (I honestly didn't realize before this book that it was a thing. And then I thought about it and it absolutely is.) Their good friend Sophie is also loosely participating, though it's not something she's particularly concerned about.
As we all know, the dating world is not an easy one to navigate. I have always felt like the holidays through in their own special challenges. And of course, when you're actively seeking out love, it becomes more elusive.
Henry definitely gets himself into some very interesting situations as he seeks his cuffing partner. And even the craziest ones seem completely true. (Tawdra Kandle does say in the beginning of the book that this is based on her son and his friends' experiences.)
I definitely snorted out loud in some spots and loved every minute of this story. I whipped through it in about an hour. And I think it helped to inspire some of my own writing that is going to have to be done now.
Posted by Andi at 5:55 PM
Labels: book review, Christmas, clean romance, contemporary romance, holidays