What does dog training have to do with becoming an author? Ellie Beals, author of Emergence, is going to tell us all about it in a special guest post today. You can also check out an excerpt from her book before you download your own copy. Be sure to also follow the rest of the tour to get to know her even better, adding your own comments and questions along the way. Best of luck in the giveaway! 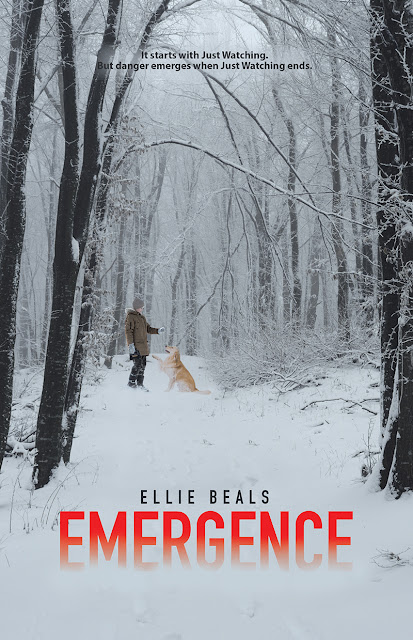 When the "wild child" Xavier ¬ first encounters Cass Hardwood and her dogs in the woods of West Quebec, he is enthralled. Unknown to them, he Just Watches them in a lengthy ongoing surveillance, before ¬ finally staging a meeting. His motives are uncertain—even to him.

The intersection of the lives of Cass, a competitive dog handler; her dogs; her cousin Lori; and the complex and enigmatic Xavier leads them all into a spiral of danger. It starts when Just Watching ends—when Cass and her crew encounter tragedy in the bush. Xavier's involvement in the tragedy, unknown to Cass, sets off a chain of potentially lethal events that begin in the dark woods of Lac Rouge, when hiking, skiing, hunting, trapping, marijuana grow-ops, and pedophilia collide. It matures in the suburbs of both Ottawa and Baltimore, and culminates back in Lac Rouge, when Lori's spurned and abusive lover arrives uninvited at Cass' isolated cabin in the woods. In the night. In the cold. In the heavily falling snow. His arrival is observed by Xavier, whose motives are again uncertain, but whose propensity for action is not.

Join Xavier, Lori, Cass, and the realistic and compelling dogs that are essential players in this dark drama as their fates converge in a deadly loop of revenge, fear, guilt, and hope.
Read an excerpt:

The dreams started as soon as they made that decision. Cass had been subject to sleep disturbances—nightmares, night terrors, and sleepwalking—throughout her childhood and early adult years. The older she got, the more infrequent they became. And when she met Noah, they just stopped. Secretly, Cass was embarrassed that it seemed that all she’d needed to get her psyche together was a good man. If that were true, it offended her feminist sensibilities. She never told anyone about these musings; this was another of those things too private to share.

[...] In the dream, she was kayaking at Lac Rouge through the twisting stream where herons had flown above her and Lori during the preceding summer. She heard the lovely sound of the paddles churning through the water. As she approached the only deep spot in the black water, the water briefly churned, and then out of the water rose a man’s bare hand and forearm—it was held aloft in a fist. No more water sounds. There was perfect stillness except for the steady drumbeat of a heart, at first slow and steady and then mounting in speed and volume until she was desperate to awaken herself, which she accomplished with a strangled scream.

Even as Noah shook her fully awake and soothed her, Cass was simultaneously shaken by the emotional impact of the dream, and acutely embarrassed by its lack of originality. Every fan of director John Boorman’s movie version of the James Dickie classic Deliverance would recognize that arm rising out of the water as a cinematic icon of guilt. And then, just to whip it up, her subconscious had fed in an imagined soundtrack from The Tell-Tale Heart.

Purchase Links:
AMAZON.COM * AMAZON.CA * INDIGO CHAPTERS * BARNES & NOBLE * BOOK DEPOSITORY * SMASHWORDS * APPLE BOOKS
My Journey to Becoming an Author: Thank you, Dog-Training
If you’ve read my novel Emergence, you’ll know that Cass Harwood, one of my protagonists, is a management consultant who is also a dog-trainer. As a successful mangement consultant, she is a chronic over-preparer, whose foundation of preparation allows her to put aside whatever script she’s created in order to successfully improvise. The same thing is true of her as an obedience competitor. This creative friction between the two poles of performance readiness (no preparation vs. obsessive planning) is an undercurrent throughout Emergence.

Cass is based pretty closely on me. Her preparation vs. improvisation profile is mine. It is what was responsible for me waiting until I was close to 70, to write a novel – even though it had been an objective of mine since I was a kid. Every time I thought about attending to this, I assumed the process would have to start by creating a detailed outline. My anticipation that this process would be lengthy, difficult and tedious was always what stopped me from getting started.

Meanwhile, as an Obedience trainer, competitor, and coach, I was getting ever-bolder in my improvisation. Over time, my propensity to NOT decide what remedy I would attempt until I actually had my hands (or leash) on the dog in question, became more pronounced. Here’s how it works now: I do a little preliminary “noodling” with the dog to get a feel for her, and then like magic and without conscious thought – I know what to do. I find this an incredibly gratifying demonstration of NOT allowing my hyper-active inner voice to prevail over older, wiser instincts too-often pushed into latency. In fact, it has always reminded me of my days as a poet, when I would sit down, pen and paper in hand…..and simply Wait. And eventually, something would come and I would follow it. I wrote poetry throughout my childhood and into my young womanhood. And now that I think about it – the fact that poetry ended when consulting started, is probably not coincidental.

Which takes us to the summer of 2020, as I approached my 70th birthday during a time of plague, and thought: If not now, when? I went through my compendium of potential plot-lines, characters, and dramatic events collected over decades, tagged a few that I thought I could merge into a coherent whole, and then - sat down to write. No outline. Just. Sat. Down. To. Write. The first chapter, in Xavier’s voice, emerged within an hour. It has never changed since it was first written.

My process after that was not devoid of planning. But the planning was done in a way that would not circumvent the creative process. Its iterative nature was based on understanding that for me, the process of creating through writing, while writing, is essential. For me, that creative process can be harnessed but not directed, and it was that not-yet-conscious wisdom that was at the heart of my reluctance to develop a detailed outline at the outset.

So for those interested in writerly technique – this was my process: I would write a chapter. I would then do a rough outline of the next chapter. As time went on, the rough outline expanded to looking well forward, and to eventually encompassing all of the plot. But in my mind, plot development as outlined was always provisional - dependent on whatever “happened” in the chapter I was writing each day. Each day’s work including revising the outline as required, based on what had occurred the preceding day. Thoughout the three month period in which Emergence was written, the writing remained the driver, and the outline its servant, rather than the obverse.

Fun is very important to me - I want it and need it. Writing Emergence was so much fun! I suspect that if I had not unconsciously re-asserted my relationship to creativity and spontaneity through dog-training, it would never have happened.

Ellie Beals grew up in Baltimore, Maryland and moved to Canada when she was 20. She spent the majority of her professional career as a management consultant in Ottawa, Ontario. Plain language writing was one of her specialties.

Dogs have been a constant in Ellie's life from the time she was a child. In the mid-1990s, she started to train and compete in Obedience with Golden Retrievers, with considerable success. In 2014, she had the highest-rated Canadian obedience dog (Fracas—upon whom Chuff is modelled), and her husband David Skinner had the second-rated dog. During a ten-year period, both Ellie and David were regularly ranked among Canada's top ten Obedience competitors. They have an active obedience coaching practice in Ottawa, having retired from their previous professional careers in order to spend more time playing with their dogs and their students.

Like Cass and Noah Harwood, Ellie and David have a log cabin in the wilds of West Quebec, where Ellie is an avid wilderness recreationist, constantly accompanied by her dogs. As COVID-19 spread in March of 2020, she and David temporarily shut down their coaching practice and retreated to their cabin, where Emergence was written. Lac Rouge is not the real name of the lake on which they live. Everything else about the locale for Emergence is faithful to the character of the gentle Laurentian mountains of West Quebec.