Review of Covet Thy Neighbor by Denise Carbo

I found myself relating to this contemporary romance a lot more than I anticipated I would! Check out an excerpt from Covet Thy Neighbor, the second book in Denise Carbo's Granite Cove series as well as my full thoughts on the book. Be sure to follow the tour for even more and leave your thoughts along the way. Best of luck entering the giveaway! 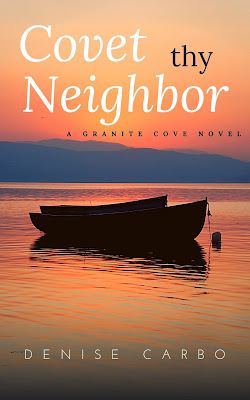 Single mom of twin boys, Olivia Banner, has her hands full juggling life’s demands. She doesn’t have time for her mysterious new neighbor or all the questions his presence conjures up, even if he is a handsome devil.

Toss in a complicated relationship with her ex-husband, meddlesome family members, and going back to school to provide a stable financial future for her and her boys, and Olivia turns to her gal pals for guidance.

Sometimes playing it safe is the right choice, and other times leaping into the unknown can lead to all the dreams you never knew you had coming true.
Read an excerpt:

“My neighbor is a serial killer.”

“Umm…is that fact or supposition?” Lucinda’s blonde eyebrows arch halfway up her forehead as she leans against the marble counter nibbling on a piece of muffin.

The aroma of freshly baked chocolate chip and oatmeal raisin cookies wafts across the kitchen after Franny opens the ovens. She puts the trays of cookies on the rolling rack in front of the ovens and props her hands on her hips. “You didn’t go back there without me, did you? I told you I would go.”

I shake my head and lift myself onto the counter next to the sink. “No—well, not intentionally. I was sitting on my back deck this morning enjoying my second cup of coffee while contemplating my life and what the hell I want to do with it when I heard a crash next door. So, of course, I went over to ensure no one was dying or anything.”

“You went over there thinking you lived next door to a serial killer? Why didn’t you call the police?” Lucinda drops the rest of her muffin into the garbage and brushes the crumbs off her fingers. “Have you called the police?” She glances at Franny. “She’s not serious, is she?”

Franny holds up a finger to her sister. “Hold on, Luce. Olivia, what happened?”

“My neighbor was on his patio, lying on his back, just staring at the sky. There was a ladder on its side near him. To be honest, for a second, I thought he might be dead. Then he jumped up and yelled at me for trespassing. I was ready to give him hell right back, but when I noticed the large assortment of weapons littering his kitchen table, I left.”

Buy Links:
Barnes & Noble * Amazon * iTunes * Kobo * Google
**My thoughts**
I found myself relating to this book more than I thought I would. I admit than when I started it, I was annoyed with Olivia. She was hyper-protective of her children and had all kinds of crazy assumptions about her neighbor, Luke, such as he was maybe a serial killer. And the story was being told in the present tense in a way that is not my personal preference. I felt like every single little move was being narrated as it happened.
But I kept on going. Either I got used to the present tense narration or else it eased up a little bit. Olivia calmed down a lot, I felt, and we started to get to know her better. Plus the game between her and Luke got started. And man, was it a familiar one.
Quick rabbit trail, let's just say that I went through a similar relationship with a neighbor for a long time. It was that slow burn, "Does he or doesn't he?" sort of confusing for a while, and oh, the fun of the divorced ex. The only differences were no children were involved and ours was a fade-out and not a HEA. But I got Olivia's thoughts and perspectives on her relationship.
There are lots of other fun characters throughout amongst Olivia's friends. I had a feeling that Franny's story may have been the first one in the series, just based on how she and her relationship were presented in this book. I looked it up and I was right, so I'll be going back to the first one to read that pretty soon. I do enjoy Granite Cove and the people there and will be on the lookout for a third story.
And then there are the less than stellar people, such as the cousin whom I just want to smack. I have known people like her. And Olivia's ex-husband is no prize, either. I guess they just help to give a real feel to the story, because I could think of people who were similar to many of these characters as I was reading along.
Thank you to Goddess Fish and the author for providing me with a requested copy. All thoughts and opinions are my own.
About the author:
Denise Carbo writes Contemporary Romance, Paranormal Romance, and Romantic Suspense. She is a voracious reader, loves to travel, is fascinated by the supernatural, and enjoys solving mysteries.

She lives in a small, picturesque New England town with her high school sweetheart and their three amazing sons.

Newsletter Sign Up: http://eepurl.com/dt5N7M
Denise Carbo will be awarding a $20 Amazon/BN GC to a randomly drawn winner via rafflecopter during the tour.
a Rafflecopter giveaway
Posted by Andi at 3:30 AM
Labels: book excerpt, book review, contemporary romance, giveaway, Goddess Fish