Earl of Brecken by Aubrey Wynne

Welcome to the book blast for Earl of Brecken by Aubrey Wynne! As you follow along the tour, you'll have the chance to check out various excerpts and get multiple chances to enter the great giveaway. Remember to leave questions and comments for the author along the way! 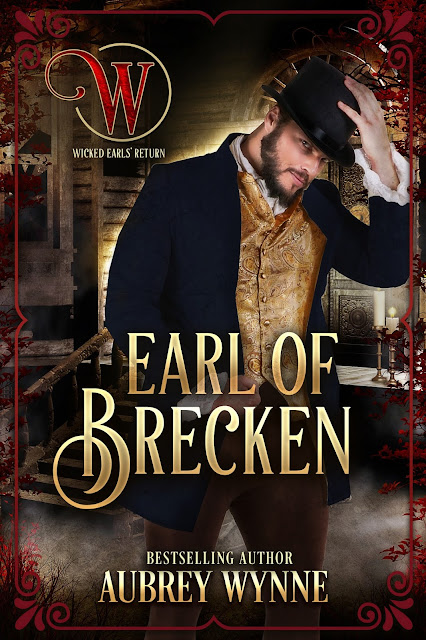 A seductive Welsh earl on the brink of ruin. A wealthy city in search of a hero.

Miss Evelina Franklin reads too many romance novels. She’s certain a handsome duke—or dashing highwayman—is in her future. In the meantime, Evie entertains herself with the admirers vying for her fortune.

The Earl of Brecken needs cash. His late father left their Welsh estate in ruin, and his mother will not let him rest until it is restored to its former glory. Notorious for his seductive charm, he searches the ballrooms for a wealthy heiress. His choices are dismal until he meets Miss Franklin. Guileless and gorgeous with an enormous dowry, she seems the answer to his prayers. Until his conscience makes an unexpected appearance.
Read an excerpt:

Madoc crumpled the paper and scowled fiercely at the roaring fire. He scanned the library of Brooks’s, then squinted at the shadowed corners of the room, glad no one else witnessed his irritation. He and a close confidante were enjoying a leisurely evening in a private London gentlemen’s club. They’d traded a profitable evening of gaming for a quiet place to talk and enjoy a decanter of brandy, when he’d remembered the envelope tucked inside his coat pocket.

He snorted with good humor at the Earl of Sunderland’s observation. “Ha! My invisible armor protects me well. News from home is rarely good these days.”

Madoc tossed the paper into the flames. “The solicitor informed me that he’s still waiting for my annual income. He sent word to my father, who replied it would arrive forthwith. I suppose I don’t need that stallion at Tattersall’s.”

“I could loan you the sum,” offered Sunderland with a grin, his midnight hair gleaming in the flickering light, “but you won more brass than I did at the tables.”

With a sigh, Madoc swirled the amber liquid in his crystal glass. “I’ve got blunt enough from my, er, other services. I couldn’t care less about the money. The sum has shrunk each year I’ve been gone.”

“Do you think there’s trouble with the estate? How is the cantankerous old Welshman?”

“Mama’s last letter described Father’s health as declining. He’s rarely left the grounds since his fall, and now he won’t leave the castle.”

Madoc remembered the accident like it was yesterday. Foxhunting had been his father’s favorite pastime—until he took a steep hedge that broke his back. The Earl of Brecken hadn’t walked in ten years. “He’s so blasted proud, didn’t want anyone to see him as less than a man, as he put it.”

“How old is he now?” Sunderland asked. “Must be nigh on sixty, eh?”

“Sixty-three last month.” He rubbed the back of his neck. “I believe a journey home is in order. Something’s amiss.”

Bestselling and award-winning author Aubrey Wynne is an elementary teacher by trade, champion of children and animals by conscience, and author by night. She resides in the Midwest with her husband, dogs, horses, mule, and barn cats. Obsessions include wine, history, travel, trail riding, and all things Christmas. Her Chicago Christmas series has received the Golden Quill, Aspen Gold, Heart of Excellence, and the Gayle Wilson Award of Excellence and twice nominated as a Rone finalist by InD’tale Magazine.

Aubrey’s first love is medieval romance but after dipping her toe in the Regency period in 2018 with the Wicked Earls’ Club, she was smitten. This inspired her spin-off series Once Upon a Widow and the Scottish Regency series A MacNaughton Castle Romance with Dragonblade Novels.

Subscribe to Aubrey’s newsletter for new releases and exclusive excerpts and free stories:

Aubrey Wynne will be awarding a $10 Amazon or B/N GC to a randomly drawn winner via rafflecopter during the tour.
a Rafflecopter giveaway
Posted by Andi at 3:30 AM