A Million Things to Ask a Neuroscientist by Mike Tranter PhD

Welcome to the book tour for A Million Things to Ask a Neuroscientist by Mike Tranter, PhD. Not only do you get a sneak peek inside his book, but Mike is also sharing with us what he would do if he encountered a time machine. It's always interesting to hear people's answers! Let him know your thoughts in the comments section and then follow the tour for even more fun. Best of luck in the giveaway! 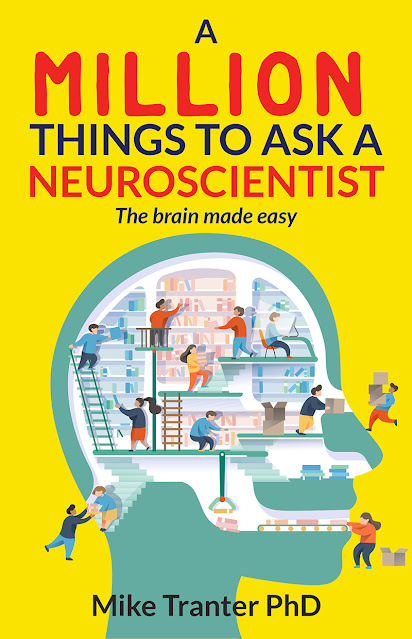 A Million Things To Ask A Neuroscientist answers some of the most asked questions about the brain, making the science fun and accessible to everyone. Inside, you will journey through some of the most interesting and strange things that our brain does every single day.

Have you always wanted to know just what a memory actually is, or why we dream? What is our consciousness? Why do some people seem to ‘click’ with others? And can our brain really multi-task?
Read an excerpt:

Have you ever been standing at the top of a tall building or cliff edge and had a sudden but brief urge to jump? You have no real thought of actually doing it, and you are not depressed, suicidal, or otherwise distressed, but that urge appears nonetheless. As it turns out, neuroscience has a name for such an occurrence, high places phenomenon, sometimes termed the call to the void, and it is actually very normal and common. There are also reports of impulses to jump in front of a train, stick a hand in a fire, or turn a steering wheel into traffic. Thankfully, the person generally doesn't follow through, and although most accounts of this phenomenon are anecdotal, there is one team of scientists in Florida, USA, who decided to take another look. The research team asked 431 students about such episodes in their personal lives, and a surprising 55% acknowledged that they have experienced them at some stage in their lives.

Science has revealed to us that high place phenomenon is possibly the result of a split-second delay between two opposing brain signals. One signal is based on our survival instinct that notices danger and tells us that we should avoid it, such as falling from a great height, or a train hitting us in the face. Another signal coming from our more logical brain tells us that we are relatively safe where we are, and there is no real threat to our survival. The resulting signals are interpreted by our brain - now somewhat confused, for it to relay this rather bizarre message and we experience the high place phenomenon. So, if you ever have a sudden impulse to jump off the top of Mount Everest, just remember that it is normal, but please don't do it anyway.

Buy on Amazon
(affiliate link)
You discover a time machine. Where and when would you go and why?
This is so interesting, and I have thought about it before. I always seem to think that I would go back in time to see historical events with my own eyes and to have a real first-hand experience. I could visit Michelangelo as he painted the Sistine chapel, or even go back to the age of the dinosaurs, and see the tropical paradise of the Earth, before being eaten by a T-rex.

However, the more I think about it, the more I think I would journey into the future. Nothing too far, but perhaps 1000 years. I think by this time, we would have mastered space travel, not only to the planets in our solar system, but potentially other worlds too. Although it would be normal in the year 3021, for me it would be incredible, and technically, I would be the first human to travel amongst the planets and stars, given that I am a thousand years younger than everyone else.

I would also love to see the technology that we have developed by this point. Although it would be almost impossible to know how to use any of it. Can you imagine William Wallace, the Scottish Warrior from 1297, turning up to your house and using your microwave to heat up a snack? There would be confusion all over. That is a hurdle I would need to cross, but that’s ok, it would still be amazing to see, even it if would be confusing for me.

As for the ‘where’, I think it would probably just be in the UK. At least it will be a little familiar to me, even if it is 1000 years in the future.

It would also be fascinating to see what becomes of us humans, and how Earth is holding up. Did we destroy it? Will we be living on Mars by this point? Did we recreate the dinosaurs and have it go disastrously wrong only for Jeff Goldblum to save us?

Who knows, but it is something that I would love to find out. 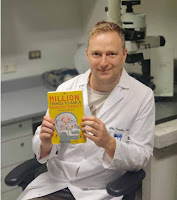 Dr Mike Tranter is from the North of England and studied how drugs work in our body, but it wasn't long before he found his true calling as a neuroscientist. After a PhD in neuroscience, he spent years in research labs all over the world, studying how the brain works. Although, it is his prominent rise as a science communicator, opening up the world of neuroscience to everybody, that he enjoys the most.

Michael Tranter PhD will be awarding a $20 Amazon or Barnes and Noble GC to a randomly drawn winner via rafflecopter during the tour.
a Rafflecopter giveaway
Posted by Andi at 3:30 AM
Labels: book excerpt, book promo, giveaway, Goddess Fish, guest post, nonfiction