Check out Blood Mug, the new mystery by W.F. Ranew, including an excerpt and his thoughts on character creation and the role of music. Be sure to follow the rest of the tour for even more! And best of luck entering the giveaway. 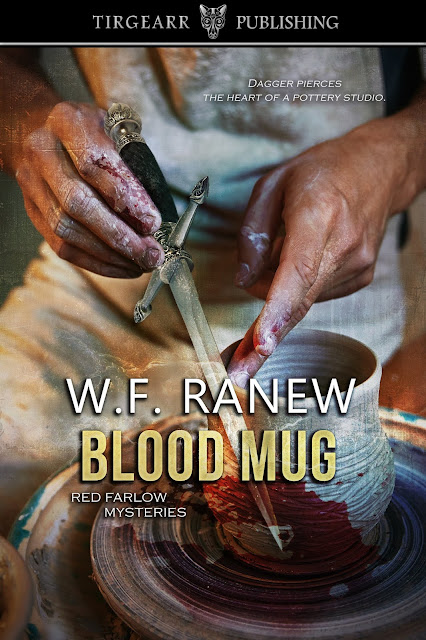 PI Red Farlow has a meeting with Wickham Art Center board chair in Atlanta, but when he arrives, he finds the chairman slumped over his potter's wheel with a medieval battle dagger protruding from his back.

During the investigation, other victims are discovered in the pottery studio, each meeting the same gruesome end as the chairman. Is the dagger a dramatic flourish of a twisted mind, or a more profound message?

Clues soon reveal a real estate scheme—wealthy Venezuelan investors plan to plow Wickham under and build condos on the site.

Red gets his hands muddy as he throws himself into finding the answers.

A woman in her early thirties stood leaning out and holding the screen door open. She stood about five feet four inches and wore a flower print sundress with an open back. It was short at the hem and tied seductively by a loose bow behind her neck. Her naturally blonde hair was best described as fashionably grunge. It was all over her head in a wild and crazy way. She was barefoot and sported tattoos on her beautiful white skin.

Her beauty glowed in an absolutely Southern country way, body ink aside. The lady’s accent went with her hair, dress, and feet.

“Yes, ma’am.” I approached the porch and stopped to speak. “My name is Red Farlow. I’d like to ask you a few questions about a woman named Karen Rawley.”

“Yes, of course, or you wouldn’t be here,” she said. “My named is Lucy Wallerford. Of the Wallerford clan in and around Wallerford, Georgia. We go way back yonder to the Revolution years.”

After the concisely delivered family history lesson, she seemed hesitant about what else to say.

“I understand Karen left Athens in a hurry,” I said. “I need to speak with her again about a recent event in Atlanta.” …

My eyes met hers. They were black and piercing, the kind of eyes that looked right through you and absorbed everything about you. All in one glance.

“Well, come on inside then.”

I held the door as she walked in ahead of me.

Character creation and the role of music
Characters come alive for me in my thoughts over time and as I write. Some appear on their own, while I have to drag others into the manuscript. At times, a character barges into the story. An example of this is Halbert “Sho’nuff” Dixon in my first Red Farlow book, Rich and Gone—the story of a wealthy businessman who bilks millions out of family and friends and flees the country.

Early in the novel, Red goes on a nighttime surveillance visit to a neighborhood in Jacksonville, Florida. Dixon appears to be a local rent-a-cop when he stops Red and demands to see identification. Red resists, slugs Dixon, and flees the scene.

Afterward, Red thinks he might have crossed paths with Dixon in the past. Sure enough, the man won’t go away and becomes a key part of the story as he stalks Red.

Some characters are likable; others not so much. In Blue Magnolia, the main man is downright loveable.

In the story, Hank wants a chance at country stardom in Nashville, but he keeps running into roadblocks. He pens a song called “Redneck Devil,” which laments the unfortunate lot of good ol’ boys who are unemployed and devoid of hope. The tune becomes a favorite among local bar patrons in the rural South and stirs up a lot of trouble.

Some far-right country misfits—the Blue Magnolia—demand he play the song at their hate rally. The singer resists, he’s kidnapped, and all hell breaks loose.

Red Farlow takes up the cause and keeps Hank safe on the road.

Hank’s wealthy cousin, Mary Ellen Winship, has the singer’s back. She’s rich and carries a handgun—a nasty combination for anyone who hurts her precious Cowboy Tillman. One Blue Magnolia member learns this the hard way.

Ranew is a former newspaper reporter, editor and communication executive. He started his journalism career covering sports, police, and city council meetings at his hometown newspaper, The Quitman Free Press. He also worked as a reporter and editor for The Augusta (Ga.) Chronicle, The Florida Times-Union and the Atlanta Journal-Constitution. In corporate communications, he has written speeches for President Jimmy Carter and leaders of public companies, including Bank of America, CitiGroup, Equifax, NCR, The Coca-Cola Company, and ING.

Early in his career, he worked as part-time radio dispatcher for a small-town police department.

He lives in Atlanta and St. Simons Island, Ga.

W.F. Ranew will be awarding a $15 Amazon or Barnes and Noble GC to a randomly drawn winner via rafflecopter during the tour.
a Rafflecopter giveaway
Posted by Andi at 3:30 AM