Interview with Brenda Gayle, Author of 'The Doubting Heart 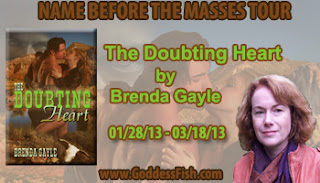 Welcome to the Name Before the Masses Tour for The Doubting Heart by Brenda Gayle. Take a moment to get to know her better through my interview. Follow the tour for even more sneak peeks into her and her book!

What was the inspiration behind 'The Doubting Heart'?

The Doubting Heart was originally called Wildhorse Pass, and the title came to me when I misread a sign while driving along a highway on the Bruce Peninsula, in Ontario. I thought “hey, that’s a neat name for a place,” and started to wonder about what type of place it would be and what would go on there. I don’t know what sort of mood I was in but I kept thinking about doubting your senses and mistaken identity, and slowly a plot formed. The title of the book changed, when I realized there was more about this group of people that I wanted to explore. The Doubting Heart became the second book in my Heart’s Desire series.

Which character spoke to you the most while you were writing it?

I love the character of Shelby, although it wasn’t an easy place to get to with her. She is the most difficult character I’ve ever written. I think there is some self-doubt in all the women I write about, but Shelby takes it to new heights, essentially molding herself into whatever she thinks others want her to be. I realized that some of my difficulty with her was that I reluctantly recognized myself in some of her attitudes and behavior. Nevertheless, Shelby’s passion to solve the mysterious death of her friend and her journey toward self-acceptance won me over, and made her one of my favorite characters.

If you could turn your book into a movie, which actors would you choose to play each role?

My husband always jokes that he and I were the models for the cover of The Doubting Heart. It’s true, we do somewhat resemble the artist’s rendering, or at least we did many years ago. In terms of casting for a movie: Chris Hemsworth has the size and intensity to play the hero, Chad Graham. For Shelby Holt, I see Emma Stone in the part, although at 5’6” she’s a little tall for my petite heroine. But that’s what Hollywood magic is all about, right?

What are the traits of cowboys and ranch hands that make them so appealing to women?

There is a romanticism about the west, a harkening back to simpler times when the roles of men and women were more clearly defined. I’m not suggesting that women want to go back to being barefoot in the kitchen and subject to the dictates of their men, but I think there is something about being cherished and protected that comes across in heroes that are cowboys and ranch hands.

What are some of your other favorite western-type novels?

I like the familial aspect of western romance series. Each time you pick up a new book in the series, you feel like you’re coming home again—you know these people, you are part of their clan. That was what I was aiming for with my Heart’s Desire series. Linda Lael Miller has been very successful with this. I think she has almost a dozen series now. Diana Palmer is another example.
What other projects do you currently have in the works?

At the moment, I am finishing the third book in the Heart’s Desire series, tentatively titled The Forsaken Heart. This concludes the original story arc and wraps up a bunch of loose ends from the first two books. I am exploring storylines for other characters in the books, so look for more in this series.

My next project will likely be a departure from contemporary romance suspense. For a number of years, I’ve had an idea for a book based on a family legend and I think it’s finally time to write it.

If you could choose any destination in the world, where would you visit and why?

Fiji. Why? I’m not sure except it is warm and sounds exotic.

If you could be any character in a book, who would you be?

Definitely not Shelby (LOL, see above). I really like the minor character of Carmelina Hawke. She is in only one scene of The Doubting Heart (but it’s an important one) and is a recurring character in the series, playing a larger role in the first book The Hungry Heart and the almost completed third book, The Forsaken Heart. Carmelina is a smart, intelligent, well-organized woman who provides great insight and advice. Even though she is going through her own trials in her marriage, she is a great and considerate friend.

What is one of your most cherished writing rituals?

At the start of each day I need 30-60 minutes to sit quietly and drink my coffee (which my husband brings me in bed—even on weekends). The radio may be on, but I am rarely listening to it. I need to be alone with my thoughts, which may range from the practical what I need to do that day to daydreaming about living in a warmer climate, although more often than not, they are merely wisps of ideas or wishes or nothing at all. If I don’t have this time, I feel totally out of sync for the rest of the day.

I don’t like horseback riding. It makes me nervous to racing along on anything where I, alone, don’t control the brakes.


Brenda will be awarding one commenter at every stop a digital download of her new short story, Father of the Bride?, the first in The Wild Rose Press’s Dearly Beloved series, and one randomly drawn commenter on the tour will receive a $50 Amazon gift card. 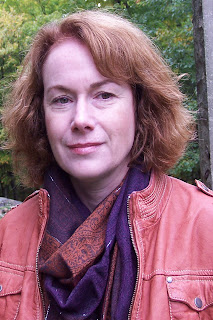 A writer all her life, Brenda Gayle returned to her love of fiction after more than 20 years in the world of corporate communications—although some might argue there is plenty of opportunity for fiction-writing there, too. She holds a Master's degree in journalism and an undergraduate degree in psychology. A fan of many genres, Brenda is drawn to contemporary romance and enjoys creating deeply emotional stories with elements of mystery and suspense.

You can visit her at www.BrendaGayle.com or find her on 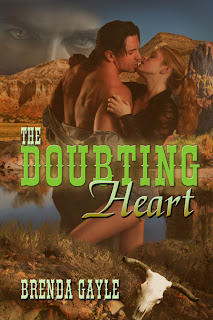 The Doubting Heart
by Brenda Gayle

A woman determined to prove her friend was murdered questions her sanity when his look-alike appears.

When Shelby Holt convinces a friend to work at Wildhorse Pass tourist ranch, she never imagines he will die there. The police say Michael's death was accidental, but Shelby doesn't believe it. Haunted by guilt, she puts her academic career on hold to investigate.

Just back from the Middle East, Chad Graham is guilt-ridden over Michael's death too. He poses as a ranch hand at Wildhorse Pass to investigate the woman claiming his cousin's death is suspicious. Were the police wrong? Or is Shelby hiding something?

Shelby knows she can't trust her heart, but when it comes to Chad, she can't trust her head either. He looks uncannily like Michael. Yet even as their distrust deepens, sensual attraction simmers between them. The closer Shelby and Chad get to answers—and to each other—the closer they get to danger…and to a killer who will stop at nothing to avoid discovery.
~~~~~~~~~~~~~

Shelby lowered her gaze, allowing it to linger on his hips, admiring the way the faded denim gently hugged the firm, rounded buttocks before falling over what she imagined were strong, powerful thighs. Then he raised his head and she was treated to a glorious view of glistening droplets of water coursing down his back, past where his waist narrowed, to disappear beneath the waistband of his jeans.

Wow! The word reverberated through her mind and her skin glowed warm at the sight. She smiled, bemused by her reaction to the unknown man.

Well, it has been a while and there’s nothing wrong with looking.

He shook his head and turned towards her. The shimmering spray momentarily impeded her view of his face, then the mist fell away and everything began to move in slow motion. Her gut twisted painfully and she gasped for air.

“Hello,” he said, moving towards her, not seeming the least bit self-conscious about finding himself the object of her stare.

It can’t be! Her mind tried to make sense of what she was seeing.

He was taller, heavier—in all the right places—younger. His hair was a darker brown and longer. He was unshaven, an affectation she generally abhorred, but on him the dark stubble added an unexpected measure of sensual intrigue. The line of his chin was stronger, too, and his mouth lacked the self-deprecating smile. But his eyes.… Dark swaths of eyebrow added to their intensity and she couldn’t look away from their penetrating gray stare. Oh God, he has Michael’s eyes!