'The Odor of Violet' by Ju Ephraime Book Tour & Review 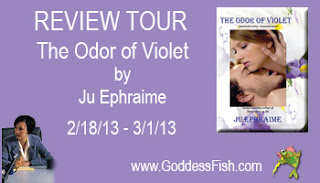 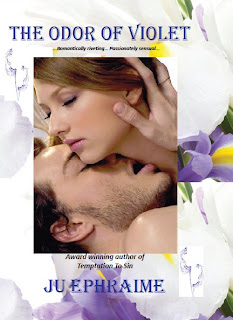 THE ODOR OF VIOLET
By
Ju Ephraime

STEP INTO THE SIGHTLESS WORLD OF DAMIEN FALCONER, AS HE STRUGGLES TO COME TO GRIPS WITH THE BLISTERING ATTRACTION HE FEELS FOR HIS NEW PERSONAL ASSISTANT, LISA ANDREWS.

Full of self-doubt as he struggled to regain his independence, the last thing Damien was looking for when he hired his new assistant, was to fall in love. So, he fought it for as long as he could, until the feelings he had for Lisa kept chipping away at him. Exposing a heart he had thought encased in stone, never to love again.

Lisa, a gentle, caring individual, a professional nurse, and inexperienced in matters of the heart, was ill-equipped to deal with the emotional and physical attraction she felt for her boss, Damien Falconer. Fully cognizant of the pitfalls that exist in such a relationship, Lisa fought equally hard to resist the powerful lure of Damien.

The blistering attraction between Damien and Lisa was searing in its intensity. Both were trying desperately to do the right thing, but the fates had other plans for them. Can two hearts that were broken be made whole again?…..

Ms. Andrews walked into the room, and Damien felt the air leave his lungs. He could not see her, but he felt Jake’s reaction also. He was not certain if he was mirroring Jake’s reaction to the candidate or his own overactive imagination. Whatever the reason, he had a physical reaction to whomever it was that walked into his library. She was polite and calm, and he sensed she had a smile on her face because Jake had an answering smile in his voice when he greeted her. Poor Damien, he couldn’t see a thing, but boy, was he aware of her. He could smell the fragrance she was wearing, and it was doing strange things to his body.

There was a hint of jasmine, mixed with a bit of musk, but the overwhelming scent was of violet. He recognized the scent because of the perfusion of violet plants that grew in the garden surrounding his house.

It was his favorite flower. He was never tired of sitting on the porch just inhaling its heady fragrance.

On Ms. Andrews, the fragrance was positively intoxicating. The mixture of violet with her unique scent was overpowering. Damien was almost in pain from the strength of his physical reaction to her. He was uncomfortable in his seat and kept fidgeting and moving to get a more comfortable position. He did not want either Jake or the young woman to notice his discomfort. He desperately wanted to see the woman who was in his library, but he had to be content with just listening to her responses to Jake’s questions.

She sounded a bit flustered because she would begin each response with a slight nervous laugh, and Jake would respond in kind. This exchange between the two infuriated Damien, who wanted to participate in the conversation. He interrupted one of Jake’s questions to her with one of his own.

“Tell me, Ms. Andrews, how long have you been out of school?”

Damien and Lisa are two lost souls who come across each other when Lisa interviews for a job as his aide. Both of them have been burned in love. Lisa was taken advantage of and humiliated. Damien was abandoned by the woman he thought would be his forever, simply because he was no longer "perfect" in her eyes. An accident left him blind a couple of years earlier.

Lisa comes on board to help Damien conduct his daily life and business while his friend and helper Jake prepares to go out of town. Her scent, which overwhelmingly is like violets, appeals to Damien, awakening a sexual passion in him that he hasn't known in years. He has no idea what she looks like, but is completely attracted to her.

Lisa is also attracted to Damien because of his male scent. But because she can see, she is also extremely drawn to his physical prowess. They predictably succumb to their desires, but not without a few rocks thrown in their way to cause them to stumble a bit. Damien also has a big secret that he isn't ready to share with Lisa.

This book is hot and heavy in the sex department, but not in a way that makes it seem dirty. If blatant sexual scenes bother you, then this book is not for you. If you like it hotter, you will enjoy this book.

I can’t recall a time in my life when I wasn’t writing. I know I started a long, long, time ago. I began writing short stories for the local radio station in my home town, which were read on the air at story time. After I had my children, I went back to school to further my education. I have since earned several degrees, including two Masters and a Doctorate in Higher Education Administration from Northeastern University in Boston. During the course of my schooling, I wrote and published a working curriculum for a career school, as well as, other literary works. A couple years ago, I revisited my first love, writing for fun and enjoyment.

I live in a small town in Connecticut, where the closest thing to a mall is a shopping strip, so nothing exciting happens there. I’m a mother of three and a grandmother of five. My dog Bondine is my favorite companion when I take up pen and paper to write.

Many of my stories are set in the places I've visited. The children I encounter during my travels determine the theme of the book.  I love to write stories about talented, inquisitive, and curious children who are thirsty for knowledge.

When I’m not writing my children books, I write romance novels under a pen name. Oftentimes, I take the time to visit the places in which my stories are set, which is the icing on the cake. My second love is traveling, and those times when I can combine writing with traveling, I’m usually in writers' heaven because I’m doing my two most favorite things...