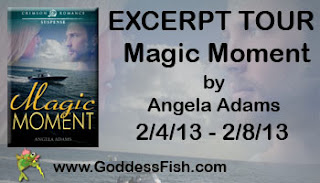 Welcome to the excerpt tour for Magic Moment by Angela Adams. As you peruse this post, you will find an exclusive excerpt from this book. Follow the tour to read even more! Thanks for stopping by! 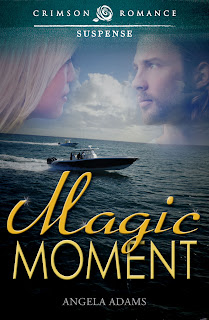 When the FBI brings Laura Roberts - a quiet, reserved bookkeeper - in for questioning regarding activities at the warehouse where she works, an uneasy Laura resigns her job - only to be attacked by thugs.

Chase Donovan intends to spend a few peaceful days on his boat getting his head together - and finds a woman being assaulted by two men who say his father told them to do it.

Chase doesn’t want to believe his father could hurt anyone. Laura doesn’t understand why she’s a target. Can they learn to work together to discover the truth - before someone dies?
~~~~~~~~~~~~~

Dilemmas and the misconceptions of others have pried Chase and Laura apart. They’re expecting a child and are working to find their way back to each other.

After walking around to her side, Chase opened the door. Caressing her hand, he helped her slide out of the car. She swayed, grabbing the door handle.

“I’m tired,” she stated as if her exhaustion wasn’t commonplace nowadays.

Chase closed the door. Without warning, he slipped his arm under her knees, scooping her up. Her arms encircled his neck.

“You don’t have to carry me,” she said, her resistance a weak one.

Chase valued any excuse. He relished having her in his arms. “Take advantage while you can. Keep it up with those sundaes, by next month I won't be able to lift you."

He started up the walkway.

At the reference to ice cream, she licked her lips. “Chase, you should’ve eaten some. The fudge sauce was the sweetest I’ve ever tasted. It was the best!”

“I appreciated your offered spoonful, but I wouldn’t dare take one tiny bite from you.”

“Oh, I meant you should have gotten your own.”

They laughed, reaching the porch. Laura pressed her head to his shoulder. She fit perfectly in his arms, and in his heart.

Her eyes were closed, her body relaxed against him. A slight smile curled her lips. “Umm.”

“Honey, look at me,” he said, his voice gentle. He loved her. She and the baby were his world.

Opening her eyes, she lifted her head from his shoulder.

“I like when you call me ‘honey’,” she whispered.

Angela Adams writes and reviews contemporary romances. Her work has appeared in Romance at Heart, Oysters and Chocolate, and The Long and Short Reviews. In December 2011, Whimsical Publications published an anthology, Winter Wonders. Ms. Adams’ short story “Burgers and Hot Chocolate,” was among the collection.