'Until the Twelfth of Never' Book Tour & Review 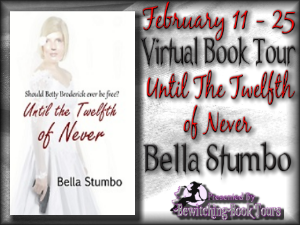 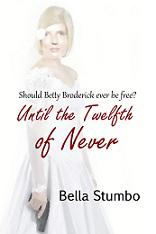 Until the Twelfth of Never

They were two of the most notorious and controversial murder trials of the last twenty-five years, splitting American public opinion in half.

Before dawn on November 5, 1989, Betty Broderick got into her car and drove over to the house in San Diego of her lawyer ex-husband, Daniel T. Broderick III, and his new wife, Linda. Arriving at 5:30 a.m., she used a key that she had obtained from one of her children to enter the house by a back door and climbed the stairs to Dan and Linda’s bedroom. Five shots rang out in the dark, three hitting their targets. Linda died instantly. Dan lingered on for several minutes. As he tried to call for help, Betty stamped on his hand and tore the phone from the wall.

The prosecution claimed it was as about as clear a case of premeditated murder as anyone could imagine. Betty claimed she had gone over to the house to talk to Dan - or maybe to commit suicide in front of him - but when someone shouted, ‘Call the police’, she got flustered and started firing.

Betty Broderick was acquitted of first degree murder in her second trial but found guilty of second degree murder.

To some, Betty Broderick is virtually the patron saint of the sanctity of marriage, executing her abusive, cheating husband and his ‘nineteen year old college dropout of a Polack whore’ (actually Linda was twenty-eight, a college graduate and a professional paralegal). To others, Dan Broderick suffered his wife’s abuse of him for fourteen years of marriage, left her well provided for and then married the love of his life, only to be continually stalked for seven years, to have Betty repeatedly incite his children to kill him and Linda, to find her driving her car through the front door of his new house, and then to be murdered in the coldest of blood.

Bella Stumbo’s account of the Dan, Linda and Betty Broderick affair is encyclopedic and definitive, and ‘Until the Twelfth of Never’ was a runaway international bestseller when it was first published twenty years ago. Bello Stumbo herself died in 2002, so was not alive to cover Betty Broderick’s parole hearing in November 2011, a short account of which is included in this book.

Read ‘Until the Twelfth of Never’ and you will certainly have an opinion.


Nor was she ever at a loss for the perfect, colorful anecdote to drive her point home: "I would've been treated better if l'd been a good horse or a dog that served my master well for twenty years. At least you give that animal respect and thanks … I was a faithful dog for all those years, and he couldn't even afford me the respect of saying, 'Okay, she's too old and I want to get rid of her.' Oh no. He had to throw me out and say, 'She was a piece of shit for twenty years and always a problem, and I couldn't wait to get rid of her and she deserves nothing.' He was the coldest, meanest asshole on earth." There was never a whit of self-pity in her tone—only brutal, naked rage born of screaming indignation and disbelief.

This book is well researched and well-written. I am reminded of Truman Capote's  In Cold Blood. The difference here is that Bella doesn't seem to be particularly drawn to one side or the other. She seems to have done her best to balance the good and the bad and both sides of the story. The interviews seem to be exhaustive, covering all sides of the case and events leading up to it. I can't imagine the time and energy it would have taken to put all of this together.

I vaguely remember hearing about the murder and subsequent trials. I am just a couple of years younger than the Brodercks' youngest children, so my parents would have tried to shield me from a lot of the coverage. By the time the parole hearing would have taken place, I would have not remembered it.

True crime stories are always interesting to read. The how and why of what prompts someone to commit such unspeakable acts never ceases to blow my mind. To be honest, I didn't feel sorry for either one of them as I read this book. Yes, there were moments where I did feel briefly sorry for the pain each one was going through, but most of the time I was angry at both of them. They both behaved stupidly, and shame on them for putting the children into the mix. My dislike for them kept me glued to my Kindle, though.
I have read that this story is being turned into a major Hollywood motion picture. I may be tempted to see it, now that I know more of the story.


For those who are interested, there is a movie about Betty Broderick available on Netflix. (This same movie is discussed in the book. Betty even wrote to star Meredith Baxter, who portrayed her in the film.) It will also air on the Lifetime Movie Network on Saturday, March 23, 2013 at 8 PM and Sunday, March 24, 2013 at 12 AM. 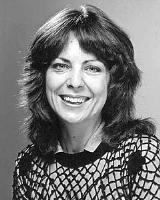 Bella Stumbo was a gifted writer whose dogged reporting, grace with words and ability to make the most obstinate subjects reveal themselves led to some of the most memorable profiles and features published in The LA Times.

Around The LA Times, her habits were legendary. She gently coaxed reluctant subjects into an interview, often after submitting a previous story for examination, or after a mutual friend vouched for her character. Then she trailed her subjects for as long as they tolerated her - sometimes months on end.

When it came time to write, she would hole up at her house, not to emerge for days, during which she did not eat or sleep but chain-smoked a storm. When she was done, she would look haggard, like someone who had spent six nights on a Greyhound bus.