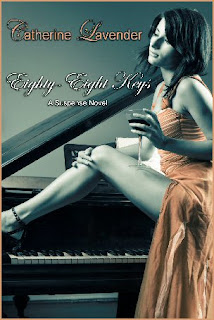 Leah is a young woman who is trying to break free from a strict religious background and pursue her dream as a pianist in the world of show business. While trying to find her independence her heart is held captive by Jason Rowe a local basketball star who established an organization to help troubled youth. When Jason is found murdered in his home, Leah is determined to get answers from a closed investigation. During her state of emotional turmoil, Leah finds comfort not only in the melody of her music, but in the arms of a married man named Calvin. With her dreams at her fingertips, Leah is tangled in a web of lies and deceit. Despite the fear of learning the truth, Leah has to realize that only the truth can set her free.

A dead lover, with a trail of broken hearts…
A married man, with a double-life…
A dream chaser, with a killer at her heels…
A piano, with eighty-eight keys…

This was an intriguing and fast read. Leah has grown up in a home with Pentecostal parents. Her father is the minister and his wife the ever-doting zealous religious mother. The portrayal of these two seemed quite accurate, based on people I have known in real life. Sometimes it was hard to imagine that Leah had come from such a background, because she seemed to with it and so much more contemporary than her parents. I caught glimpses of it here and there as she forged ahead with her dreams and with the guilt that she felt with her relationship with Calvin.

The relationships between characters in this story blend together, with some being much more complicated than others. Small twists in relationships do all gradually come to light. Some of the twists you will figure out on your own before they are revealed. Other ones may surprise you a little bit. Some of the characters will earn the distrust that you have of them from the very beginning. Others may redeem themselves as the book goes on. I know that my gut instinct for a few of the characters, both good and bad, wasn't as accurate as it usually is. I like it when a story can keep me on my toes like that.

I received a free copy of this book in exchange for my honest review.
Posted by Andi at 4:46 PM
Labels: Coffee Beans and Love Scenes, murder, mystery, romance, suspense