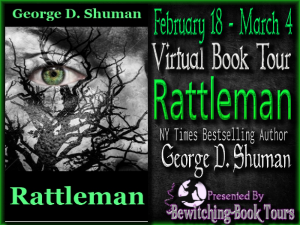 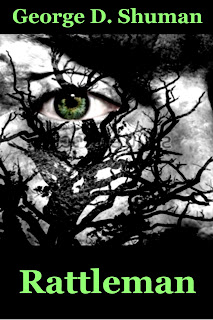 
From George D. Shuman who served twenty years with the Metropolitan Police Department, Washington DC, and whose international bestseller, '18 Seconds', is currently in production as a major Hollywood motion picture.
Better still, 'Rattleman' is George D. Shuman's most gripping crime thriller yet.

The Rattleman knows every crevice, every creek, every cave, every ravine, every inch of his remote hunting grounds in the Appalachian Mountains.

He is a determined serial killer, always waiting for his next victim to cross his path.

When Park Ranger Jane Cameron literally stumbles across the remains of two of his victims, she discovers that she too has been caught in his trap.

And when the 'Rattleman's prey is at his mercy, she’s dead.

I chose to participate in this book tour because I have a thing for serial killer novels. Rattleman doesn't disappoint. Snakes creep me out to no end, and obviously there is a connection to rattlesnakes for this crazy man. The deranged man has been led quite astray by those snake-handling Pentecostals, completely missing their lessons. He prefers to hide in the wildnerness along the Appalachian Trail, murdering those unlucky enough to cross his path. He especially seems to have a thing for women, killing them in a most foul way.

Shuman writes descriptively, using an extensive vocabulary that enriches his prose. Each character has a purpose; all of them brought together when appropriate. There is enough action to keep you intrigued, and even a smidge of romance thrown in. It's a book that easily lends itself to a movie, which I believe is in the works. George Shuman is the international bestselling author of the Sherry Moore series about a blind woman who can see 18 seconds from a dead person's life, using her innate ability to track down their killers.

'Rattleman' is the first of George's books to be published by Taylor Street. It too will be a major Hollywood motion picture.
http://georgedshuman.com/books.html

a Rafflecopter giveaway
Posted by Andi at 12:39 AM