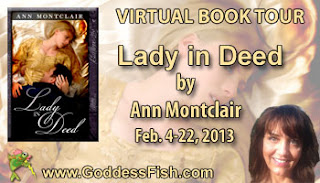 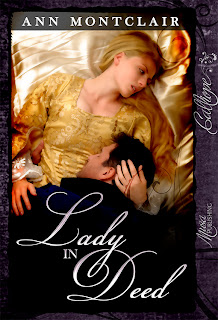 Lady in Deed
by Ann Montclair

Piety or passion… What’s a lady to do?

Lady Mary Rutherford believed she would live her entire life as a nun. But when King Henry VIII’s reformist movement makes practicing religion a dangerous proposition, Mary is forced to begin a new life with a family she doesn't know. Worse, she must become lady of the manor, a role for which she feels sorely unprepared.

After a decade of service to his king, Lord Trenton Stanley returns home to find his estate in ruins, his fortune depleted, and his doddering father drooling over Mary—a woman Trent fears has been installed to replace his mother. Trent strives to rebuild his life, but his desire for Mary becomes a serious distraction he can’t seem to ignore.

Though Mary is anxious to prove she’s a worthy lady, she’s tempted by the rakish Trent into deeds most unladylike…

He wanted to reach out and touch her soft yellow hair, move it from her proud shoulders, and hold her closely. Her outrage evoked a strange tenderness in Trent, but also bitterness. Who was this chit, and why did she act like he’d done her harm? They rode in his coach with his driver, and she was, what, a guest, a ward? An unwelcome one if she kept glaring with those icy eyes. Trent couldn’t help it. He actually found her unbelievably attractive, even if her gaze promised no reward.

“And you are my ward? How so? Do tell, my ‘lady.’” He exaggerated the last to reinforce he doubted her assertion. His lifted brow named her a liar. The woman drew a deep and ragged breath, and pounded on the coach top to indicate to James this journey had come to a most unfavourable end.

As the carriage slowed to stop, she flung the door wide, and escaped like a songbird from its cage in one swift movement. The snow had subsided, but the accumulated flakes softened her landing. Her little satin slippers proved no match for the slushy stuff, and her whole body shifted and sagged onto the frozen earth. Trent bounded to her side and hoisted her rigid body into the coach.

James began to clamber down. “What has happened? What have I done?”

“James, on to Stanley Hall. This woman claims it is our mutual destination.”

“She is correct, my lord, and her name is the Lady Mary Rutherford.”

Trent set Mary upon the carriage bench with care. She slumped onto the seat and pulled her feet under her like a curled cat with claws finally retracted. With the rich fur he gently placed over her shoulders, she seemed small and vulnerable, but the rosy lips and flashing eyes revealed a fire within. He attempted a conciliatory smile, but her round eyes narrowed, and she sniffed and turned up her nose. She would not be mollified much less appeased. Was the little temptress ward to his father? Trent cringed with embarrassment that he had violated her with much vigour. Passion had clouded his judgment.

“Damn this to hell!” His temper exploded.

Mary flinched and then looked at him with utter disbelief. “Do not speak so. God bless you, my lord.”

“Yes,” she hissed. “I am your cousin come to be your ward. Not by choice, I was recently turned out of a nunnery — ”

Lady Mary continued stiffly as if Trent hadn’t spoken. “I assure you my leave was due to the state of the kingdom and not any wrongdoing on my part.” She shook her head as if scolding a naughty schoolboy, and she caught her lower lip between her teeth, staring at him with frank puzzlement. He was struck by the innocent yet sensual gesture.

“Do go on with your winsome tale.”

Mary turned her back, and before he could elicit more information or explain his honest error, the coach stopped again. They’d arrived at his family’s estate. 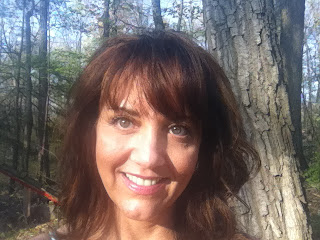 Ann Montclair writes contemporary and historical fiction and is an English professor at a small, rural community college. She was born in Los Angeles, California, where her parents and grown daughter now reside. Ann currently lives in the Finger Lakes region of New York with her husband, son, and a pile of dogs and cats. She enjoys listening to live music, hiking, cycling, cooking, and gardening. She hates dieting but spends a lot of time ruminating on the topic. Her biggest wish is that each of her readers will be inspired to believe in and find their own happily-ever-after, no matter their fears and insecurities. Her motto is Love triumphs! Ann has three published contemporary romance novels: The Billionaire’s Bauble (Soul Mate Publishing 2011), One Wet Summer (Musa Publishing 2012), and Good Things Come in Tall Packages (Musa Publishing 2012). Lady in Deed (Musa Publishing 2012) is her first historical romance. Lady is the Law, another Tudor historical romance, is forthcoming 2013.

Purchase some of her other works:

Ann will be awarding a $30.00 Amazon GC to a randomly drawn commenter during the tour. Follow the tour for more chances to win!