'Steel Rose' by Barbara Custer Name Before the Masses Tour 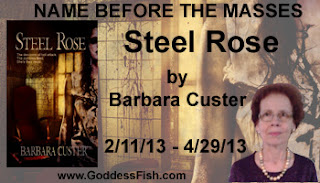 Today, I would like to welcome Barbara Custer, author of Steel Rose, to the blog. She talks to us about her books, zombies, aliens, and more. Thanks for stopping by and for your support!

What was the inspiration for 'Steel Rose'?

Around 2000 to 2008, I had severe osteoarthritis in both wrists, necessitating joint reconstruction surgeries. Although I embellished a lot, many of the physical difficulties Alexis had on her job happened in real life. That said, other inspirations were seasoned into Steel Rose. Tom Johnson and I coauthored Alien Worlds, where aliens and humans interacted on a daily basis. City of Brotherly Death came next with its zombies. I got to wondering how an alien doctor would handle my condition. What would I do if zombies broke into my home?

Which characters were the most interesting to write?

I’d have to say Alexis, Laurel, and Yeron. Alexis is determined to protect her younger sister, and she’s not going to let her disability, personal demons, or the renegade soldiers get in the way. Yeron, having grown up in an alien culture, has a tough go at adjusting to the human society. That doesn’t stop him from acting on his attraction toward Alexis. Laurel had a troubled childhood, and when her imaginary friend Abaddon gives orders, you get to observe her descent into madness.

Do you find yourself relating to any characters in particular?

I find myself relating to Alexis because of the surgeries I’ve had on my hands. Every other day at work, I used to tap a coworker on the shoulder and ask if they could open a water bottle. I also identify with Johnny because of his humor; I’ve been known to be a jokester, too. I used to read tabloid newspapers like Johnny and Alexis do.

If you could turn 'Steel Rose' into a movie, which actors (living or dead) would you choose to play the various characters?

I’d want Shannon Elizabeth to play Alexis and Brad Pitt to be Yeron. Brad has a soft, melancholic way about him that would enable him to portray Yeron’s loneliness. Kathy Bates did a great job with Annie in Misery, and she’d make an ideal actress for Laurel. For Woehar, I’d pick Rachelle Lefevre.

Is the supernatural/paranormal genre your favorite, or do you dabble in others?

The supernatural / paranormal genre is my favorite. I weaned on the supernatural through Dark Shadows and the Hammer films in my teens. Night to Dawn magazine features dark fantasy and paranormal tales. My short stories and books also incorporate elements of science fiction. This goes for my reading, too, although I do enjoy mainstream fiction, biographies, and historical tales.

I’m working on a sequel, Blood Moon Rising, in which Alexis and her survivor friends track down the people responsible for making the zombies. This search takes them into mighty dangerous territory. I’m also publishing the Night to Dawn magazine every six months. Issue 23 will come out this spring. I’m also working on a prequel for Steel Rose, but I’m keeping the details for that one a secret.

What are some of your favorite reads about zombies and/or aliens?

My favorite books about zombies are the Rot & Ruin series by Jonathan Maberry. Although his zombies crave flesh, he manages to portray a sympathetic side to them, not an easy feat. He focuses on the people who fight these monsters (characters who are in crisis). For aliens, Stephen King’s Dreamcatcher and The Tommyknockers kept me turning the pages, but I hate the way movies and books demonize aliens. You’ve got good and bad in all people, including aliens, and that was how I portrayed them in Steel Rose.

In many ways, he acts like an ordinary man, but he comes endowed with supernatural powers – mental telepathy and psychokinesis. He can rise from death and act like nothing happened. Think Lazarus and you get the picture. He cures sickness by laying his hand on the afflicted person’s head. He’s protective over children and elderly people. You’ll know he’s different by his slashing red eyes. What makes him the ultimate supernatural man, though, is that he uses his powers to help people.

If you could be a character in any book, which one would you choose?

The character I’d want to be doesn’t come from a horror or science fiction book. I’d want to be Oliver Bond, the lawyer representing Jacob Hunt in House Rules. Despite his finances and inexperience with criminal trials, Oliver manages to gain advantages for Jacob by using grit and determination. He has a lot of energy and doesn’t let the prosecutor unnerve him. Had he been in Steel Rose, he would have run Ms. Grese, the intimidating director, out of town on a rail.

Skeletons used to frighten me a lot; they still do sometimes. It started when I was ten and saw an ugly looking skeletal mummy. At the doctor’s office and in Anatomy class at college, I used to drape my coat and scarf over the skeleton there so I wouldn’t have to look at it. Thankfully, my instructors and physicians were understanding and had a great sense of humor. I started journaling about my fear, and these journal pieces turned into short stories. 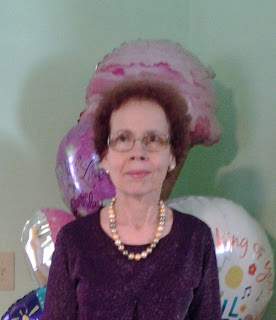 Barbara lives near Philadelphia, Pennsylvania, where she works full time as a respiratory therapist. When she’s not working with her patients, she’s enjoying a fright flick or working on horror and science fiction tales. Her short stories have appeared in numerous small press magazines. She’s published Night to Dawn magazine since 2004.

Other books by Barbara include Twilight Healer and City of Brotherly Death. She’s also coauthored Alien Worlds and Starship Invasions with Tom Johnson. She enjoys bringing her medical background to the printed page, and then blending it with supernatural horror. She maintains a presence on Facebook, Linkedin, Twitter, and The Writers Coffeehouse forum. Look for the photos with the Mylar balloons, and you’ll find her. 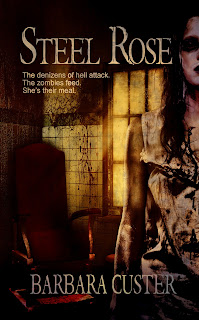 Sometimes they come back. At least the Kryszka aliens do. Their leader injects captured humans with a drug, turning them into zombies. Yeron escapes the Kryszka colony, hoping to practice medicine on the humans that fear him. Alexis, a patient, is afraid, too, until his seductive attentions arouse her. Despite his experimental drug, severe arthritis leaves her too weak to handle most guns. The Kryszka troops and zombies who break into the hospital are hungry. Very hungry. How will she fight them?
~~~~~~~~~~~~~

“Dear God, help us.” Alexis reached for her gun.

“What are you doing? Guns are forbidden on this floor, and…Oh, my God!” Ms. Grese cupped her hands over her mouth. Her authoritarian demeanor vanished, replaced by horror-stricken pallor. “Where are the officers?”

“You think our visitors give a shit?” Alexis scuttled toward the door, feeling vulnerable. The vest didn’t protect her face or hands, but the intruders wouldn’t care about that either. She shoved Ms. Grese ahead of her, pushing with her mind, Yeron beside her. “Run!” she hollered.

As the creatures poured through the ward, a stench crawled down her throat, the stink of things many days dead. Moaning drowned out the sound of Ms. Grese’s cries, a continual chant of “hungry.”

Skeletal figures in tattered rags skirted around Mark, who fired at any who got too close. Their tendons flashed gray against cold cobwebs of rib and knuckle. The flesh that quivered through widened skin tears had the sheen of rotting meat. The skin resembled cracked leather. Weeds sprouted on some of the figures’ necks and hair, the way they did in her nightmares. They made their way to the desk, where two nurses sat. The two women jumped up, both screaming. One of them opened fire with a Glock.

The armed woman was her mother.

Barbara will award one randomly drawn commenter at every stop a backlist eBook – it could be City of Brotherly Death, Twilight Healer, or one of her Night to Dawn magazines, and one randomly drawn commenter on the tour will receive a $15.00 gift certificate to Dunkin Donuts or Starbucks, winner's choice. Follow the tour for more chances to win!
Posted by Andi at 3:30 AM
Labels: aliens, giveaway, Goddess Fish, interview, paranormal, zombies