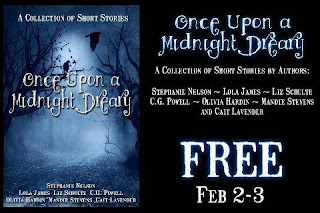 Are you looking for some new paranormal reads? Once Upon a Midnight Dreary features short stories by some friends and their fellow authors. You'll recognize a lot of the names if you follow my blogs at all. Get great short stories by Stephanie Nelson, Lola James, Liz Schulte, C.G. Powell, Olivia Hardin, Mandie Stevens, and Cait Lavender!
Best of all, it is FREE on February 2 & 3! 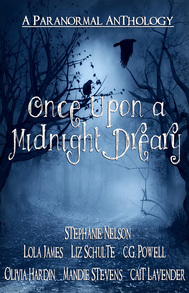 Book blurb from Amazon:
Once Upon a Midnight Dreary is a collection of seven short stories with a spooky edge.

Carnival of Darkness by Stephanie Nelson (Author of the Gwen Sparks & Anna Avery series)Andee Baker met the man of her dreams and then made a complete fool out of herself. She thought she would never see him again until her best friend, Claire, got an invitation for both of them to attend the Carnival of Darkness from the guy Andee couldn’t stop thinking about. They jump at the opportunity to go, but even before Andee crosses the entrance, she realizes there's something peculiar about the carnival. The ticket master's red eyes and the waltzing ghost are anything but cheesy special effects. Andee discovers at the Carnival of Darkness not everything is as it seems.

Machado by Lola James (Author of the Spellbound & Fate series)A weekend of fun, romance, and ghost stories at a beautiful beachside hotel was the plan. But Mackenzie had a bad feeling about the trip since the moment her husband and friends brought it up. The Machado Inn was a place where legends came to life and the past roamed the hallways. Guests came to stay the night, but few made it out alive.

The Visitor by Liz Schulte (Author of the Guardian Trilogy and Dark Corners)Reverend Black hated storms. Rumbles from the Heavens promised violence and retribution this night, but he could only watch as the blackness descended. The tempest did not come alone. A visitor walked before it—patient and silent. The torrential downpour would wash away the mask, the gales would tear away carefully constructed lies, and the flashes of light would expose the truth—a truth that wouldn’t set him free.

Miss Stake by C.G. Powell (Author of the No Uncertain Logic series)Alligators, snakes, and old boyfriends...Oh my. The swamp is a dangerous place, but it’s nothing Veronica can’t handle. That is until a weekend in the marshes brings to light a whole new set of dangers. Now that the supernatural cat is out of the bag, Veronica’s life will never be the same.

Dark Road Winding by Olivia Hardin (Author of the Bend-Bite-Shift Trilogy)Johana Hall has her hands full juggling personal life and her public relations career in Washington DC. The last thing she needs is to get called back to Texas because her Grandpa H.M. believes he’s being haunted. Adult Protective Services wants to put the elderly ex-con in a nursing home, but mysterious happenings at the homestead convince Johana he isn’t as crazy as everyone thinks. Getting to the bottom of the local legend is the least of her worries when she realizes someone is willing to go to any means to get her grandpa off Sara Jane Road. Can she figure things out before it’s too late?

Redeemed by Mandie StevensEva never claimed to be a good guardian angel, but she tries. After losing two charges, the Powers That Be have begun to doubt her abilities. To redeem herself, Eva sets out to rescue Elsie, granddaughter of the former king of the Fae. A Demon has kidnapped Elsie to complete an ancient ritual that will allow them to slip through the veil between Earth and Hell on Halloween.

With unlikely friends in tow—a human liaison, a fallen angel, and a powerful yet distractingly charming vampire—Eva is in a race against time.

Save Elsie, save the world—and her job.

Vicis by Cait Lavender (Author of the Lupine Moon Series)Raised captive by a powerful corporation named Vicis, life inside the facility was all 56 knew until she met Adam. When she's slated to be euthanized, no longer considered a valuable asset for the company, she takes her life into her own hands. With her considerable abilities and Adam’s help, 56 will fight to free them both from Vicis’ clutches and learn to feel something she's always been denied: Love.