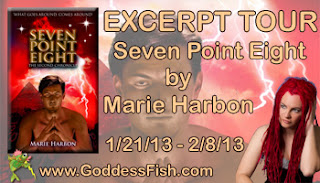 Welcome to the Excerpt Tour for Seven Point Eight by Marie Harbon. Each stop along this tour is hosting an exclusive excerpt or guest post. Be sure to follow the tour for several sneak peeks at this book and author! 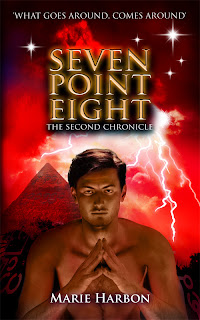 'The Truth Will Set You Free'
In the second instalment of the Seven Point Eight series, the legacy of the OOBE project weighs heavily on the conscience of Dr Paul Eldridge. Tahra Mamoun needs to muster all her courage and venture back into the alternate dimensions of reality. Through a series of challenging, surreal and frightening experiences, she comes to comprehend the destructive power she can yield and must face her own demons in the process.
Paul continues his quest to understand the ancient knowledge of the cosmos, while dark forces seek to hijack his research to further a secret agenda. With their lives in jeopardy, Paul and Tahra confront their enemies against an international backdrop featuring the pyramids of Giza and the peaks of Switzerland.
Meanwhile, Sam and Ava endeavour to uncover their past, even though it may irrevocably change their lives.
In a tale of courage and tragedy, love and betrayal, their lives are interwoven around the demons of one man, Max Richardson, who'll stop at nothing to achieve his objectives.

Written in the style of a TV series, Seven Point Eight draws together quantum physics, psychic powers, alternate dimensions, time travel, past lives, ancient wisdom and conspiracy in a soap opera for the soul.


Playlist For The Second Chronicle

Tracks unrelated to the time period

For the hell of it and to all the characters – RHIANNA/Stay
http://www.youtube.com/watch?v=bP9eeGv0EPo


Tracks related to the time periods in the book 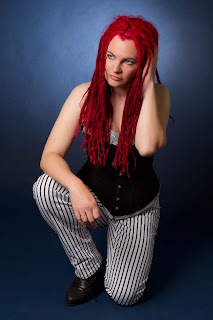 Marie Harbon has worked in both the retail and fitness industry. She has a degree in sport and fitness, and taught group exercise for several years, delivering aerobics and Pilates. For two years, she delivered BTEC sport courses and has also instructed dance and sport with children.

Marie is a member of Nottingham Writers Studio, Her future plans include not only completing the 'Seven Point Eight' series, but involve writing YA, children's and adult books, short stories, novellas and scripts.

Aside from writing, Marie is a self-confessed fabric geek and purveyor of beautiful, often ostentatious bags, bustiers and clothing. She lives in the town of Eastwood, Nottinghamshire, which is in England.

Marie will be awarding a free copy of Seven Point Eight: The First Chronicle via Smashwords and a 12 ebook swagbag including, sci-fi, fantasy, paranormal and YA titles to a randomly drawn commenter during the tour. Follow the tour for more chances to win!
Posted by Andi at 3:30 AM
Labels: book promo, excerpts, giveaway, Goddess Fish