How to Avoid the Slush Pile by Sheryl Browne

Please welcome author Sheryl Browne to the blog today, as she shares more of her publishing experiences with us. Thanks for stopping by!

As part of my book blog tour I was invited to offer ten tips on how to avoid the slush pile.

So who am I to offer such advice? Well, I currently have three books published, Recipes for Disaster, Somebody to Love and Warrant for Love. I also have a book due for release on Valentine’s Day, A Little Bit of Madness, and a further three book contract.

Blowing my own trumpet a bit, aren’t I?

After more years than I care to mention sobbing onto my keyboard, spookily recognising a rejection even before I’d opened the email, it’s a first, trust me. My road to publication has, you see, has been littered with pot-holes, and it’s only now I feel qualified to offer such advice. I would therefore like to share some of what I’ve learned along the way in the hope it might help make your road a little less bumpy if you are just starting out on your publishing journey.

OK, my ten tips are:

~~Make sure your first chapter is your best! The first chapter has to provide the all-important hook. It also has to introduce the characters, show their inner/outer conflict, along with the ‘inciting incident’ which brings your characters together and into conflict, i.e. set the tone for the story. That’s an awful lot of information/background information you are going to be cramming into that first chapter. Could it be – horror of horrors – that your slaved over first chapter actually ends up muddled and totally boring? A prologue is a consideration, of course, but unless it conveys information crucial to the book that can’t be conveyed in the first chapter, it’s superfluous. So, be open to rewriting that first chapter, scrapping it, or moving chapters around to make sure you are starting your story in the right place. At the end of the day, it is your book. You are the author. You have the power to do it!

~~Do consider joining a writers’ group or perhaps teaming up with a critique partner. Feedback is invaluable.

~~Do employ outside editorial help if you need to, but be careful to check credentials. Personally, I chose to approach someone recommended by the Romantic Novelists’ Association, who was very reasonably priced and extremely professional. You can find details of editors I’ve used, including a fabulous US editor, at www.sherylbrowne.com

~~If your manuscript is ready to submit make sure to research agent/publisher websites to see if your genre is something they represent. DO keep your covering letter short. A brief bio and intro the book is sufficient. For example, I am seeking representation for my book, Lost in Birmingham, a thriller, approximately 90,000 words in length. I noted from your website you are interested in looking at this genre and wondered whether my book might be of interest to you. DO mention you realise they will be inundated with enquiries – they will be!

~~Make sure to keep synopsis and chapters to the length stipulated in the agent/publisher submission guidelines (i.e. two page synopsis and first three chaps) and only submit on line if they accept email submissions. Most agents do nowadays.

~~Read your work out loud, into a tape recorder, rather than to the dog. If you hesitate while you are reading, chances are the reader will, too. It’s a great way of ironing out the glitches and getting rid of superfluous narrative.

~~Once you are underway with the submission process, do think about building yourself an online presence. Authors need to be totally interactive in promotion in today’s publishing climate. Set up a website, but do make sure it looks professional. Take a look at the websites of authors writing in a similar genre. Set up a blog, linking back to your own website, a Twitter Account and Facebook page and start connecting with people. Published authors, as well as authors who have chosen to ePublish, find Twitter an invaluable marketing tool. There are other social networking platforms, such as Linked in, Stumbleupon, Digg, but don’t overwhelm yourself!

~~Become Goodreads or other Bookbuzz site member. You can then start linking with likeminded readers and writers and, as with Facebook, eventually set up an author page.

~~Do also consider linking up with online writer/author support groups. Often you can connect up with members of these groups via Twitter and begin sharing/tweeting between members to reach a higher audience. I am a now a proud member and editor at www.loveahappyending.com (a group of thirty show-cased authors and associate Readers from around the world, everything from chick lit to WWII memoirs & stories).

~~If you get rejected and the agent/publisher has offered you a piece of advice, even a snippet, be grateful. Despite hundreds of submissions to wade through, someone has gone to the trouble of commenting because they think your work has potential. They wouldn’t have bothered otherwise. Use the advice, if you can, dust yourself off, and move on.

I wish you every bit of luck your hard work deserves! 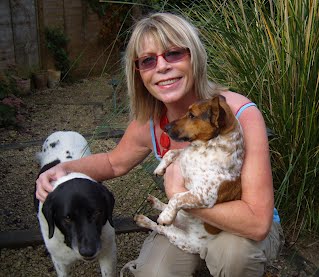 Now residing in Worcestershire, Sheryl Browne grew up in Birmingham, UK, where she studied Art & Design. She wears many hats: a partner in her own business, a mother, and a foster parent to disabled dogs. Creative in spirit, Sheryl has always had a passion for writing. A member of the Romantic Novelists' Association, she has previously been published in the US and writes Romantic Comedy because, as she puts it, "life is just too short to be miserable."

Sheryl's debut novel, RECIPES FOR DISASTER - combining deliciously different and fun recipes with sexilicious romantic comedy, is garnering some fabulous reviews! Sheryl has also been offered a further three-book contract under the Safkhet Publishing Soul imprint. SOMEBODY TO LOVE, a romantic comedy centring around a single policeman father’s search for love, his autistic little boy and the boy’s Autism Assistance Dog, launched July 1 with an immediate 5* review.  WARRANT FOR LOVE, bringing together three couples in a twisting story that resolves perfectly, released August 1, and A LITTLE BIT OF MADNESS releases on Valentine’s Day 2013. 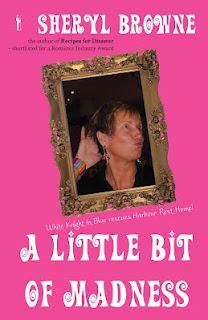 Celia Summers, intrepid mother of two, loves her work as an art therapist at The Harbour Rest Home.  She’s proud of her elderly independents’ artwork, even if her partner, Martin, is disparaging of their efforts.  But then, Martin is preoccupied, trying to get his hands on his mother’s home, Charlton Hall, to bail himself out of debt.  To which end, he has to get Celia on side with a fabrication of lies.
Meanwhile, Celia fights to keep The Harbour from being closed.  She’s ready to abseil from a church steeple to bring attention to the plight of her old people, no matter that she might fall and end up splattered all over the flagstones.  When she does fall, however, it’s much more painfully.  Police Constable Alex Burrows, son of Colonel Burrows, is considerate, caring and chivalrous.  He has a wicked sense of humour, which makes Celia laugh, though when she learns of the circumstances surrounding his disabled daughter, she wants to cry.  Alex also has a reputation as a womaniser, which Celia tries to ignore.  His trying to influence his father’s Will though, she can’t.  Alex, who little by little has stolen her heart, appears to be just as much a liar as Martin.
Will Alex be able redeem himself?  Or is evicting Celia from Charlton Hall, which she and her elderlies have laid siege to, the final straw?
Read an excerpt:

‘I think I might be able to assist. Excuse me, dears.’ May squeezed between them, potty in hand. ‘There,’ she said, opening the window and chucking the contents out. ‘That should cool their ardour.’
‘Oh my God.’ Celia gawked. ‘May, I can’t believe you just did that!’
Eleanor laughed. ‘Relax, Celia. He hasn’t been assaulted quite as rudely as you think. It’s tea, not pee.’
‘I’ve been practising.’ May nodded importantly. ‘It’s not as easy as it looks, you know, making huge potfuls and getting it right, especially when it’s orgasmic.’
‘Organic, May.’
‘Oh, don’t be such a baby,’ Celia shouted through the window, as Martin gave an outraged screech and clutched his shirt from his chest. ‘It was tea, not pee.’
‘It was bloody hot!’ Martin looked up, po-faced. Appropriately, Celia thought. ‘She could have seriously injured me, the silly cow. Come on, Celia, see sense and come out before something awful happens.’
‘It already did, Martin. You happened.’
‘Fine. Have it your own way,’ Martin snapped, ‘let’s see if the police can persuade you, shall we?’ With great fanfare, he flicked open his new mobile, and whoosh, in an instant it was gone—swept away on a cloud of fire extinguisher foam.
‘Yessss!’ Celia did a little twirl on the landing. ‘Well done, Eleanor!’
‘That is it!’ Martin shouted through a face-full of suds. ‘I’m going to find a public telephone. The police will be here in minutes, Celia. You’d better get out under your own steam, while you still can!’
‘Do what you like, Martin,’ she called, as the two men in suits climbed from their vehicle, now parked behind Martin’s Jaguar. They’d had the good sense to stay out of the line of fire until now. ‘We’re not budging. We’re not even prepared to talk until we get assurances no contracts have been exchanged!’
Let him chew on that for a while, Celia thought as she turned away. Damn! The bailiffs! She realised they could split up at any moment and bolted downstairs, missing the last step from the bottom to land in a heap.
‘Ooh bloody, bloody Martin.’ Celia crawled up the banister and limped on, sure at least one of the bailiffs would be trying to gain entry at the back by now. ‘Batten down the hatches,’ she shouted, stumbling into the kitchen.
‘All battened m’dear. Blighters won’t get in here,’ the colonel assured her, walking stick ready to thrash any hand that might nudge through the cat-flap.
‘Mum,’ Luke yelled from the front hall, ‘it’s Alex.’
Oh no. Celia’s heart plummeted. Why, why, why, if he cared about any of them, couldn’t he have turned a blind eye, bunked off work, done anything but be involved in their eviction?
‘Where?’ She raced back toward the front hall, ready to dish out the same treatment to him as they had Martin, except, um, it seemed someone already had.
‘Here,’ said Alex, meeting her in the hall looking disarmingly Colin Firth-ish. Shirt plastered to his chest, his new shoes sloshing water as he walked, his expression one of total exasperation.
‘Who let you in?!’ Celia stared at him flabbergasted.
‘Luke,’ Alex supplied. ‘On the condition I told the bailiffs to back off and in the hope I wouldn’t drown, I imagine.’
‘Good God!’ The colonel blinked his monocle-free eye. ‘Not raining is it, lad?’
Alex sighed. ‘Torrentially. You might want to point out to May that hosing down policemen isn’t the best way to proceed if she wants to avoid a visit to the station.’