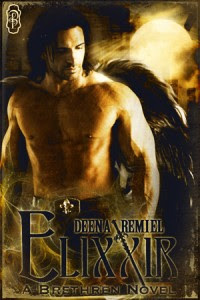 Callie has secrets, too many to count.


For twenty years she’s been living a lie as Callie Worthington, hiding from the monsters who brutally murdered her parents for possession of the Elixxir of Life. Unsuccessful before, their killers have found her and will stop at nothing to acquire the Elixxir. And see her dead.

Nathanael has a couple of secrets, too. A nasty one in particular blurs the line separating Good from Evil. As an immortal Brethren Warrior, though, he must retrieve the Elixxir before it falls into the wrong hands. Just how he’s going to get it out of Callie’s is the big question.

Tempers flare and passion ignites as Callie and Nathanael reach out to each other with their own hidden agendas. She needs his protection. He needs the Elixxir. Will their fiery passion lead to lasting love, or will their web of secrets and lies ultimately destroy them both?

The alarm proved to be no friend come Monday morning. It wouldn’t stop buzzing. Callie picked it up and threw it clear across the room. Before hitting the far wall, it managed to nail a delicate glass figurine, smashing it into a thousand pieces.

“Well, shit.” She got up to get the dustpan and broom, and swept her mess away. She fell back against her bed and ruffled her hair. “All right, sister, you promised yourself you’d change, so here we are at Day One. Get your act together, put some decent clothes on, and paint a smile on your face. Today is the first day of the rest of your life!” She sat up and smiled a cheesy, fake smile at her reflection in the dresser mirror and got ready for work.

She saw things in a whole different light by the time she downed her coffee and ate her English muffin. After tossing her plate and mug in the sink, she did a final check of her face and hair in the foyer mirror, opened the door, and slammed straight into a wall of man.

“Oh, my God! I’m so sorry! I didn’t know you were….” Her next words were frozen on her tongue as she identified the mammoth creature in front of her.

Too stunned to move, she looked straight into his jade-colored eyes, momentarily lost in the memory of how they once made her knees turn to jelly. The memory faded quickly, and she smirked as her knees held her steady and strong. Having regained her composure, she saw a huge bouquet of flowers in his hands. Crushed flowers, now.

Before he could say another word, she backed up and slammed the door in his face.

Leaning against it, she closed her eyes, wishing that she’d simply imagined him, and it was really the guy from the florist down the street. She turned and looked through the peephole. No such luck. Kemuel stood there, all right. What the hell is he doing here? Maybe if I stay in here long enough, he’ll give up and go away. No, be realistic woman. You’re gonna have to throw him out. Just do it.

Slowly, she opened the portal to Hell to find him still standing there in all of his six-foot-four, god-like glory, looking shell-shocked. She hadn’t forgotten how perfection had shined down upon him, kissing his head with pure white strands of hair, and blessed him with a muscular build meant to be scaled by her. She also hadn’t forgotten being left high and dry for nearly six months, either.

Come and play with us on March 15th! There will great games and prizes.

Brought to you by the Release Day Diva
Posted by Andi at 8:00 PM