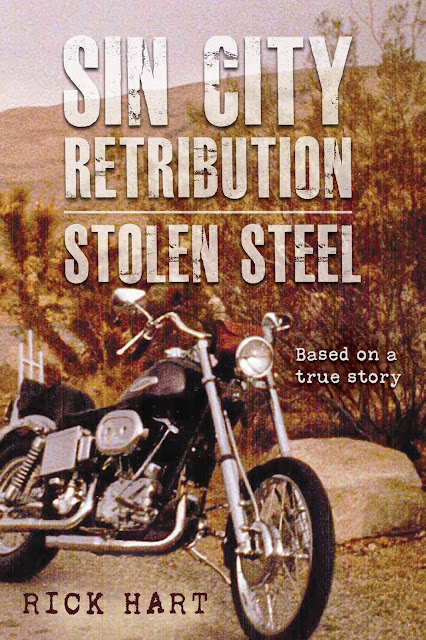 
In this thrilling read, a member of a back-patched, outlaw motorcycle club tells a tale of the gritty, honor-bound, romantic life of a Sin City Biker. Based on an incredible true story, Sin City Retribution: Stolen Steel follows Rick Hart, known to his club as Turk, as he navigates the turbulent streets of ‘70s Vegas. Stripping bare the untold stories of an evasive and covert band of brothers, Turk recounts his exploits with the Noblemen Motorcycle Club. High-speed chases, gruesome wrecks, accidental movie cameos, and truck-stop brawls are only some of Turk’s crusades with his club; but his real motivation as a Nobleman remains a closely-guarded secret. Turk is out for information… and retribution.

Rick Hart moved to Las Vegas from Virginia in 1969 while in the U.S. Air Force. After leaving the military, Rick attained a Fourth Degree Black Belt in Shorin Ryu Karate and became a Five Star PADI Scuba Diver. Rick also received two degrees from the Clark County Community College and now works at a major resort hotel on the Las Vegas Strip. Rick loves spending time with his five kids, 12 grandkids, three great-grandchildren, and his Boo-Doggy. He enjoys riding his Harley as much as always through the mountains that surround the Las Vegas valley.

I was compensated via Fiverr for sharing this post. I only share those books that I feel will be of interest to my readers.
Posted by Andi at 1:16 PM