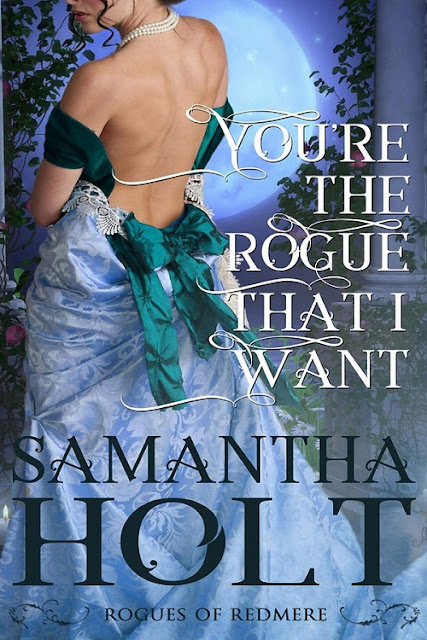 You’re the Rogue That I Want


Meet the Earl of Redmere in the 1st book in the Rogues of Redmere series, a brand new Regency romance series by #1 bestselling author Samantha Holt.

Red never shies away from a challenge.

But when Miss Hannah St. John strides into his life demanding—yes, demanding—he help her, he’s certain she’s more challenge than even he can handle.

Hannah is determined to transport an artifact from France—one that will change everything—even if it means working with a lawless man like Red. Nothing is more important than preserving history.

Not even the touch of a smuggler who inconceivably makes her stomach twist.

When it becomes clear the irritating bluestocking will do anything for this blasted artifact and needs saving from herself, the earl-turned-smuggler steps in.

Carting a cursed stone across the country with a know-it-all woman is not Red’s idea of fun, particularly when their journey runs far from smoothly…so why does he find himself enjoying her company just a little too much?


“Excuse me,” she started but her voice came out like nothing more than a mouse’s squeak. She coughed and tried again. “Excuse me, are you Red?”

His head jerked up. “Who wants to know?”

She took another step closer and gasped. The firelight cleared the shadows around his features. She was not sure what she expected from an infamous smuggler but it was not this. Where were the pock marks? The scars? The missing teeth?

There were no missing teeth to be sure. Though he kept his mouth in a firm line of disdain—or perhaps annoyance—the quick flash she had seen had revealed a mouth of perfectly healthy teeth. As for scars or pockmarks, his skin was perfect.

His light brown hair was, admittedly, a little too long and his face was unshaven, revealing several days of neglect. There were shadows around his eyes too, and he looked weary. However, that could not take away from that fact he was a handsome man.

He stared at her expectantly. She gulped. “I need your help.”

She shook her head. Impossible. He had to help her. He was her only chance. She dragged out the chair opposite and sat. One dark brow rose at the action. Chin lifted, she propped her arms on the table and leaned forward. He smelled of the sea.

“I need your help bringing across something from France. I’m told you are the man for the job.”

“Then you were told wrong.”

“I can pay handsomely.”

“Do you not? I thought all smugglers did.”

He leaned forward abruptly. “You need to watch your tongue, miss.” He glanced around. “Not everyone here is a friend.”

She jerked back a little. Handsome he might be, but he was also intimidating. His strong jaw, finished with a slight dip that was just visible under the stubble, was set firmly. His eyes glinted in the firelight though she could not tell their color properly.

She took a breath and cast her gaze over him. It was something she was in the habit of doing. Study everything closely enough and any fear she might have of it left. It had worked with spiders. When one looked closely, one could see they were no more than a few legs and a body pieced together. Those long legs no longer appeared so terrifying once she had seen them under a microscope and appreciated the unique design of the creatures.

It did not seem to quite work with this creature. His slightly creased forehead and the still lifted brow did not lose any of it sternness. His lips, she concluded, were generous for a man’s, but it did not soften his appearance. She pictured him in evening wear and that helped a little, though she could tell he would be ridiculously handsome and likely still no more polite.

“I was told you were the man to help me,” she said, aware of being a little breathless.


You can find Samantha on Facebook and join in her weekly Funday Friday giveaway: https://www.facebook.com/samanthaholtromance

Samantha lives in a small village in England with her twin girls and a dachshund called Duke. She enjoys writing historical romance involving chivalrous knights, hot highlanders and cravatted men. Writing is her (more than) full time job but on the rare occasion, she's not writing, she loves to visit the many stately homes and castles nearby.

a Rafflecopter giveaway
Posted by Andi at 1:21 PM