Welcome to the book blast for Aries' Red Sky by James Young. Check out an excerpt from this new science fiction novel. Leave James any comments or questions you may have. Be sure to follow the tour for even more excerpts and reviews. And then, of course, enter the giveaway! 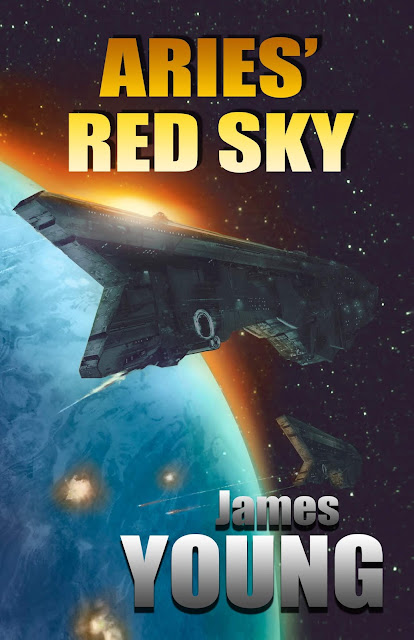 
The Confederation of Man believes all Humanity should be under Terra’s rule.

The stars will burn as these two mindsets come into brutal conflict in Aries’ Red Sky, the newest novel by award-winning author James Young.

Despite his best efforts, Agenor Acheros’ was unable to completely dodge his opponent’s whirling axe kick. Rather than a clean, visage altering hit, however, the blow thudded into the Spartan lieutenant’s thick chest.

Ow, he thought with a grunt, the woman’s combat boot sliding off the right side of his dark green gi. Agenor did not give his sparring partner time to regain her balance, allowing his dodge to the left to flow into a crouch. Even as Lieutenant Abigail Schweizer realized her vulnerability, Agenors braced himself on his left arm. This was followed by a left leg sweep that knocked his diminutive opponent onto her back. Continuing the motion with a speed and agility no man his size should possess, Agenor completed an almost complete rotation on his straining left arm. Schweizer was just trying to regain her bearings when Agenor’s feet came back around and caught her steel-toes-first in the back. The blow elicited sharp cries and gasps from onlookers as the woman flung forward several feet.

Let’s finish this, Agenor thought, coming to his knees then springing to his feet and striding towards the stunned Schweizer. He felt a calmness descend upon him, blue eyes narrowing as he carefully stalked towards his opponent.

She might be faking. Either way, she will yield.

“The Square has spoken,” Butler continued, signalling the end of the fight. Unlike the two lieutenants, Butler wore the standard Spartan Marine camouflage uniform. Inside of the Basile’s dark grey compartments, the clothing’s adaptive threads had adopted a mottled, random pattern of grey, white, black, and silver lozenge shapes.

“The Square tells all,” the roughly sixty Marines scattered in the open bay chanted with varying degrees of solemnity.


James Young is a Missouri native who escaped small town life by attending the United States Military Academy. After being set free from the Hudson River Valley, Mr. Young spent the next six years of his life in the Army repaying his education the proverbial “nickel at a time.” Along the way he collected a loving, patient, beautiful spouse…and various animals that did not fit that description. Leaving the Republic’s employ, he returned to the Midwest to pursue his doctorate—a process which took twice the time planned but is finally concluded. Having now concluded two of the prerequisites to be a super villain, Dr. Young spends his time waiting for the inevitable origin story, winning writing awards (2016 United States Naval Institute Cyber Essay Contest Winner, among others), and writing an alternate history (Usurper’s War) and military space opera (Vergassy Chronicles) series. His latest book is Aries Red Sky, the first in a new Vergassy Universe trilogy.

James Young will be awarding a 5x7 print of concept artwork from the Vergassy Universe to a randomly drawn winner via rafflecopter during the tour.