Review of Murder Gone Missing by Lida Sideris with Giveaway

Welcome to the review tour for Murder Gone Missing by Lida Sideris! This is the latest book in the Southern California Mystery series. It's the only one that I have read so far, though, and it definitely seems to work as a standalone. So take a sneak peek inside with an excerpt and then read my review. If you follow the tour, you'll be able to see even more excerpts and reviews from other readers. You can also leave the author questions and comments along the way, thus giving you more chances to enter to win the giveaway at the end.

Please note that affiliate links are present within this post. Should you make a purchase through one, I may earn a small commission at no additional cost to you. I also received a complimentary ARC of this book, which did not in any way influence my honest review. 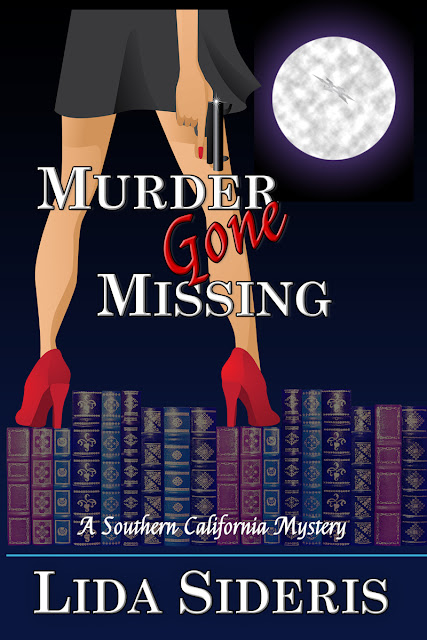 Newly minted lawyer Corrie Locke has taken a vow of abstinence. From PI work, that is. Until her best friend Michael finds his bully of a boss stabbed in the back after confronting him earlier that day. Michael panics, accidentally tampering with the crime scene...which could lead the cops to Michael instead of the real culprit. He turns to Corrie to track down the killer. She doesn't need much coaxing. Her late great PI dad taught her the ropes...and left her his cache of illegal weaponry.

They return to the scene of the crime, but the body's missing. Racing against time, Corrie dredges a prestigious Los Angeles college in pursuit of clues. All she finds are false leads. Armed with attitude and romantic feelings toward Michael, Corrie dives into a school of suspects to find the slippery fugitive. Will she clear Michael's name before he's arrested for murder?

I entered the dark office and heard a crackle beneath my sneaker. I turned on my penlight. A white envelope rested on the floor, the President’s name handwritten across the front. I picked it up. The scent of gardenias invaded my nostrils. Where had I smelled that before? I shoved the letter in my hoodie and quick-stepped toward the desk. A scratching noise stalled my next move. I spun around. I sucked in a breath and flashed my beam. The doorknob was twitching. In lightning speed, I stood next to the entry, back pressed to the wall, Taser in hand. Possibilities raced through my mind. Was it the killer? A random student?

**My thoughts**
This book is part of a series. For the most part, I think it works well as a standalone. It took me a little bit in the beginning to place some of the relationships, but there were plenty of allusions to previous cases and stories.

You have quite the motley crew of characters going on. Corrie definitely has some deductive reasoning skills. She fancies herself being a top-notch detective, but still makes an awful lot of rookie mistakes. These tend to dig her in a little deeper to the mess, even though she can usually find her way back out again. It does provide a little comic relief.

Veera strikes me as a little pushy and needy, and yet she has some good insights that end up being useful. She just really wants to be a part of it all.

And then you have the weird people who may or may not be involved in the murder. Ian and Squaley are just two bumbling idiots who keep digging themselves deeper into their own holes. You really have to experience them yourself because I'm not sure how to really articulate how they are.  A lot of them and the plot remind me a little bit of a corny '80s movie that I recently saw (though it's name escapes me) and enjoyed. Quirky characters, a murder and whodunit that doesn't seem like real life, and a bit of fun reading.


Lida Sideris is the author of the Southern California Mystery series, the latest of which, MURDER GONE MISSING, was published by Level Best Books. She writes soft-boiled mysteries and was one of two national winners of the Helen McCloy Mystery Writers of America scholarship award. To learn more about Lida, please visit www.LidaSideris.com.


Lida Sideris will be awarding a $15 Amazon or Barnes and Noble GC to a randomly drawn winner via rafflecopter during the tour.