Welcome to the blog tour for Alien Contact for Runaway Moms by Edward Hoornaert! This is a new science fiction novel with romantic elements in it. I have an excerpt for you to check out. If you want more excerpts and some reviews, follow the tour. You can leave questions and comments along the way, plus have more chances to enter the giveaway. 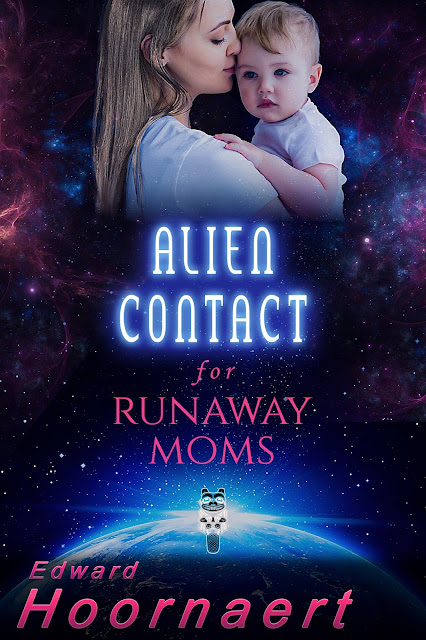 When her abusive lover tries to take custody of her baby, Audra flees where even he can’t follow: the aliens’ forbidden cities underneath Kwadra Island.

But can the safety she wants for her daughter survive a search party, violent alien criminals—and the love of an emotionally damaged Kwadran?

“Are you sure you want to do this?” As soon as the words fled his mouth, he realized how stupid they were. Of course she was sure. Nothing could stop such an elemental force of nature. She was Spirit Mother, walking amongst humans to teach him, Tal Pelletier, some of the many lessons he needed to learn.

“I…” She caressed her baby’s head. “No, I’m not sure. I lost all my certainties somewhere back in the tunnel.”

Belying her words, she reached for one of the massive, marrel-plastic door handles. Pulled. It was too heavy for her.

When he grasped the handle to help, his finger grazed hers. She froze. She was a slight woman with delicate, haunted features; she had to tip her head back to meet his eyes, almost as though asking for a kiss. Just as he needed her spirit’s strength, she needed his physical strength—but not his lust, which was tainted with anger and despair. Never that.
So he kept his lips to himself. Together, they pulled open a door onto the ghosts of a past that had never existed.

Audra moved, startling him. She touched her forehead, the baby on her chest, then both shoulders. He puzzled over her movements for a moment but then recognized the sign of the cross. The gesture was perfect, showing that she realized the mystical power of the world of his ghosts. She was indeed a Spirit Guide, sent to help him overcome his demons.

Edward Hoornaert is not only an author of science fiction, romance, and non-fiction, he's also a certifiable Harlequin Hero; he inspired N.Y. Times bestselling author Vicki Lewis Thompson to write her favorite Harlequin Desire, Mr. Valentine, which was dedicated to him. In the past, he wrote contemporary romances for Silhouette Books, but these days he writes science fiction adventures—usually with elements of romance. In addition to novelist, he has been a teacher, technical writer, salesman, janitor, and symphonic oboist.

After having 30 different addresses in his first 28 years, his rolling stone slowed in the mountains of British Columbia and stopped in Tucson, Arizona. His high school sweetheart has been his wife for more years than he has fingers and toes to count. Ed and Judi have three sons, a daughter, a mutt, and the Milky Way Galaxy's most adorable grandsons.


The author will be awarding a $15 Amazon or B/N GC to a randomly drawn winner via rafflecopter during the tour.