Rachel Brimble, author of A Rebel at Pennington's, on her Writing Journey

Welcome to the book tour for A Rebel at Pennington's by Rachel Brimble. Rachel has been featured here on this blog, as well as some of my other sites, a few times over the past several years. Today she is telling us about her writing journey. You also get a sneak peek into her latest book. If you follow the tour you can read even more excerpts and learn more about Rachel and her books. Plus you get extra chances to enter the great giveaway!

I have wanted to write ever since reading The Secret Seven series by Enid Blyton when I was around eight or nine. I would make up stories and bind the pages together with coloured ribbon. I wish so much that I’d kept my first novels!

From this young age, I wrote on and off for a few years, but it wasn’t until I found my first Harlequin romance around the age of fourteen that romance (and women’s fiction) became my passion. I vowed after I’d finished reading my first romance that I would get a book of my own published one day.

Of course, that didn’t happen for a LONG time…

I left school at sixteen and started work in a bank. A couple of years later I met and fell in love with my husband…life happened, marriage happened, kids happened. I was happy at home, but it was when my second daughter was born that I had my ‘now or never’ moment.

Starting with short stories, I had a little success online and in women’s magazines. When it was time for my daughter to start school full-time, I knew it wouldn’t be long before my husband asked me what I was going to do…I needed the answer ready. Write a novel!

That was in 2005 and, in 2007, The Wild Rose Press published my first romantic suspense, Searching For Sophie. From 2007 until 2012, I had at least one novel published by them and other small presses every year, sometimes more.

The dream started to manifest properly when I had books accepted by both Harlequin Superromance and eKensington in 2012. I went on to write eight books for Harlequin (The Templeton Cove Stories) and four Victorian romances for eKensington up until 2017.

While I was waiting for a decision from Harlequin on books nine and ten, I received a blanket email from them informing me (and the other Superromance authors) that the line would be closing in June and with immediate effect for new submissions. I was thrown into a tailspin. What now? Who would I write for? Would anyone else accept my work?

I had written the first book in what I hoped would be a brand-new Edwardian series, but my American agent hadn’t had any luck placing it and my UK agent was unsure if it was right for the UK market. So, sometime in late 2017, I woke up having made the decision that from now on, it was up to me to decide my fate. Not an agent, a publisher or anyone else. I had to get full control (as much as possible) of what I wanted to write and for whom. So, I went separate ways with both my agents and went out on my own.

I submitted the Edwardian book to Aria Fiction who I’d been watching for a while and had an instinct they would be a right fit for the book. I submitted it via their online portal and within four weeks, an editor called me back offering me a contract for The Mistress of Pennington’s (book 1 in the Pennington’s Department Store series) and three more books.

Since then, I have written the second book, A Rebel At Pennington’s, and have just finished the first draft of the third (which I hope will release in the Autumn).

The biggest lesson my journey has taught me is to listen to your instinct, whether good or bad. That is your passion—your calling—trying to get your attention. It means what you are feeling, or thinking, is the right thing for you to act on.

I love my job and already excited about the two new series ideas I have bubbling away. I plan to write bigger and better books for as long as I am able. 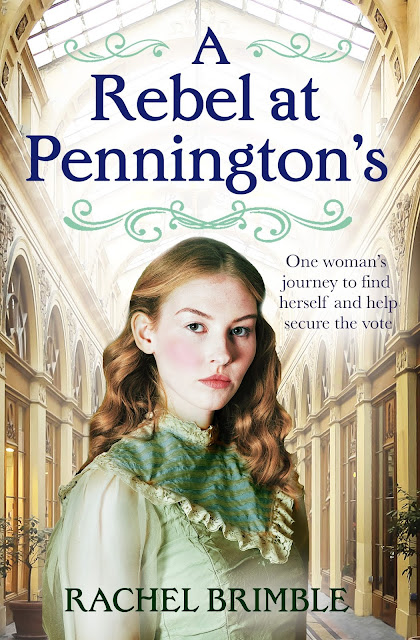 A Rebel at Pennington's

1911 Bath. Banished from her ancestral home, passionate suffrage campaigner, Esther Stanbury works as a window dresser in Pennington's Department Store. She has hopes and dreams for women's progression and will do anything to help secure the vote.
Owner of the prestigious Phoenix Hotel, Lawrence Culford has what most would view as a successful life. But Lawrence is harbouring shame, resentment and an anger that threatens his future happiness.

When Esther and Lawrence meet their mutual understanding of life's challenges unites them and they are drawn to the possibility of a life of love that neither thought existed.
With the Coronation of King-Emperor George V looming, the atmosphere in Bath is building to fever pitch, as is the suffragists' determination to secure the vote.

Will Esther's rebellious nature lead her to ruin or can they overcome their pasts and look to build a future together?


She looked towards Lawrence.

He softly studied her, and her cheeks warmed. The way he looked at her inferred he was equally moved by Mrs Hadley’s sadness. Esther looked away. He, too, was widowed. Had he and his wife once shared the same love that Grace Hadley spoke of?

Shamed by the jolt of jealousy that shot through her, Esther walked to stand behind a pillar that blocked Lawrence’s sight of her but gave her full view of Mrs Hadley. A familiar sense of unworthiness knotted Esther’s stomach. If Lawrence understood Grace Hadley’s words and sorrow, then, he too, must have known deep and meaningful love.

She would never be enough to compete with such a ghost. Would never be enough to be with a man who bore such longing for a person he’d lost. If she listened to her body and how it so treacherously reacted to Lawrence, her attraction to him would only end badly when the moment came that she’d inevitably held something of herself back.

She could not forgo everything she had built. Somehow, she had to find the strength to fight the temptation of Lawrence’s gaze and quash the yearning to see him again…to see his children again. The emotions he’d evoked in her proved her capable of feeling. Something she had doubted for so very long. Her meeting him had been worth that, at least.

Yes, I am an Amazon affiliate. So if you make a purchase through this link, I may earn a few pennies at no additional cost to you. Thanks for supporting my websites!

Rachel lives with her husband and their two daughters in a small town near Bath in the UK. Since 2007, she has had several novels published by small US presses, eight books published by Harlequin Superromance (Templeton Cove Stories) and four Victorian romances with eKensington/Lyrical.

In January 2018, she signed a four-book deal with Aria Fiction for a new Edwardian series set in Bath’s finest department store. The first book, The Mistress of Pennington’s released July 2018 with book two coming February 2019.

Rachel is a member of the Romantic Novelists Association and Romance Writers of America and has thousands of social media followers from all over the world. To sign up for her quarterly and new release newsletter, click here to go to her website: https://rachelbrimble.com/

Rachel Brimble will be awarding a $20 Amazon or Barnes and Noble GC to a randomly drawn winner via rafflecopter during the tour.