We could all use a few laughs these days. So why not try this sci-fi comedy, Stealing Jia, by Gail Koger? There's an excerpt to whet your appetite before you download your own copy. Let the author know what you think in the comments section and follow the tour for more. Best of luck entering the giveaway! 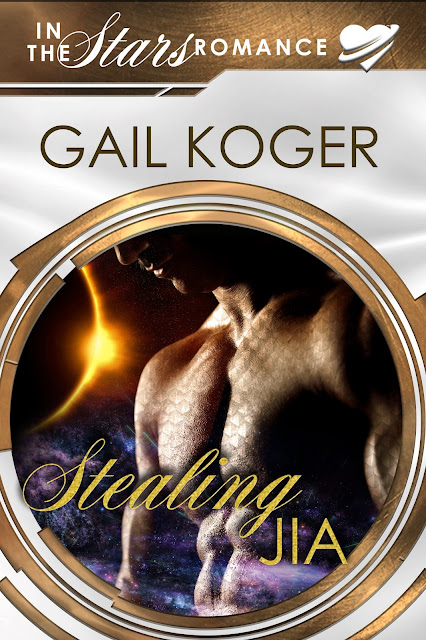 Jia grew up in an orphanage that turned children into master thieves and gave the school of hard knocks a run for its money. Jia’s psychic talents have kept her alive, but not out of trouble. While searching for her adopted brother, Jia finds herself on a galactic adventure with a horde of mischievous extra-terrestrial kids she’s determined to protect. Adding to the chaos is an Askole Battle Commander who claims she is his mate. How is that even possible? They’ve never met.

Trayon, the Battle Commander, is a deadly Askole. Huge. Battle hardened muscles. A regular warrior’s nightmare with black, armor-plated skin and tentacles. Who knew the scary guy was such an excellent kisser and had the heart of a romantic? All Jia ever wanted was a family of her own. Maybe an alien family wouldn’t be so bad.

To win Jia, Trayon must prove he loves her and she’s not some female the Coletti Overlord just sold him. But first, he has to keep the trouble magnet alive long enough to convince her.

“What are you staring at?”

Trayon pointed at my legs. “Do not move!”

I looked down and gasped. I knew I had picked up some hitchhikers, but wow. There was a brown snake with a crocodile's head and bright blue eyes coiled around my left thigh. A baby dinosaur chewed on my right pants leg. “Merda!”

I guess that was a good thing. I had to admit the little dinosaur was cute as a bug.

The Askole drew an enormous sword. “I will kill the vermin.”

“It is a Rodan. None can be allowed to live.”

“It’s a baby.” I stiffened as something moved in my hair. Had I picked up an alien version of lice too?

“Our law is quite specific. All must be destroyed.” Trayon advanced toward me.

The Rodan whimpered and tightened its grip on my leg.

I pulled my laser pistol. “You harm one scale on that kid’s head, and I’ll shoot you.”

“The Rodan have your brother.”

“So, you think this baby is the mastermind behind his kidnapping?”

Trayon’s tentacles knotted. “I am your mate, and you will obey me. Lower your weapon.”

“I guess you haven’t heard, but Earth women aren’t good at following orders and I’m not your mate.”

Trayon tapped his gauntlet. “Your weapons have been disabled.”

I pulled the trigger. Nothing happened. Cazzo! There was no way I could take Trayon in hand-to-hand combat.

Available on Amazon
(affiliate link)
About the author:
I was a 9-1-1 dispatcher for the Glendale Police Department and to keep from going totally bonkers – I mean people have no idea of what a real emergency is. Take this for an example: I answered, “9-1-1 emergency, what’s your emergency?” And this hysterical woman yelled, “My bird is in a tree.” Sometimes I really couldn’t help myself, so I said, “Birds have a tendency to do that, ma’am.” The woman screeched, “No! You don’t understand. My pet parakeet is in the tree. I’ve just got to get him down.” Like I said, not a clue. “I’m sorry ma’am, but we don’t get birds out of trees.” The woman then cried, “But… What about my husband? He’s up there, too.” See what I had to deal with? To keep from hitting myself repeatedly in the head with my phone, I took up writing.

https://www.amazon.com/Gail-Koger/e/B001K838BY/ref=dp_byline_cont_pop_ebooks_1
http://www.gailkoger.com
Gail Koger will be awarding a $20 Amazon or Barnes and Noble GC to a randomly drawn winner via rafflecopter during the tour.
a Rafflecopter giveaway
Posted by Andi at 3:30 AM
Labels: book excerpt, book promo, comedy, giveaway, Goddess Fish, science fiction