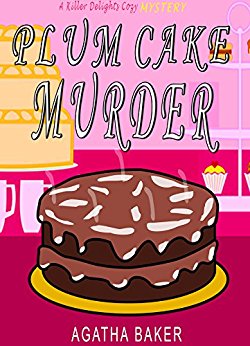 In the small town of Tapelio, Cassandra Hafonsky was a woman fulfilling her dreams, and thriving in every aspect of life. She was a modern day success no doubt about it. This lady had a loving fiancee who catered to her every need, a best friend named Dee who always had her back no matter what, and a consistently busy coffee shop she aptly named, 'Cassie's Breakfast Delight's.' Nothing could possibly derail her picture perfect existence right? Wrong!! Insert into the equation famous food critic, Wendy Fashool, who was unexpectedly coming to give her critique of Cassie's shop. Ms. Fashool was as brutal and heartless as they came when handing out her opinionated reviews of food establishments.

Long story short, she ends up ordering Cassie's best dish the 'plum cake delight.' BIG mistake!! Who knew this delectable dessert was literally to DIE for?!?

Now, Cassie must put to use her crime solving skills in order to acquit herself from the murder charge being hung over her head by the local police department.

Does Cassie have the sleuthing skills necessary to earn back her freedom, and save her life in the process?

I'm a sucker for a good cozy mystery, and I am especially fond of the ones that have food as a part of the storyline, because they often include some amazing recipes. So when I saw this available as a limited-time free Kindle download, I knew I had to jump on it.

The story has some promise when it starts out. Cassie is the owner of a delightful sweets shop in her small town. She has a devoted lifelong best friend named Dee and a devoted fiance in Greg. Dee has a crazy crush on a guy named Randall, a union that Cassie deftly facilitates to get started. Dee also seems to be suffering from some kind of a medical condition, as her doctor, Dr. Leibowitz, pops into the shop to admonish her for not taking her meds.

I felt like the doctor's behavior was rather unprofessional and that there was as significant part of Dee's story that needed to be told and isn't. Otherwise, this little exchange isn't quite necessary in this book. And then the relationship between Dee and Randall kind of goes from 0 to 60 overnight, though the way their behavior was described, I would have thought that it had been a few days.

Things start to heat up when her plum cake gets some attention. Detective Klaus is a huge fan. And then the famed food critic Wendy Fashool makes plans to come in to review the place. When Wendy shows up dead shortly after leaving Cassie's Breakfast Delights, Cassie becomes the primary suspect, and extremely determined to find out the truth.

From that point on, the story takes some bizarre twists and turns until Cassie finally solves whodunnit in the Plum Cake Murder. It's a strange story, and yet shows some promise from this first-time author.  I did it in a relaxing afternoon on my front porch. I give it three stars.