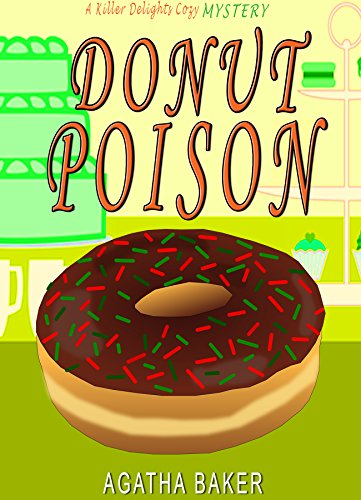 After the whole debacle of the 'Plum Cake Murder' case, beautiful Cassandra Hafonsky's life was finally beginning to return to normal. Her relationship with the longtime love of her life Greg was basically back to being as blissfully serene as it was before, and her coffee shop 'Cassie's Breakfast Delights’ was absolutely booming with business.

So, what could possibly go wrong at this point, one might ask? Hmmm, perhaps they should have refrained from uttering such a question.

On one fateful night, Cassie is invited over to locally famous Dr. Lipowitz's celebratory party for his award winning recognition in "Scientific Excellence." Other guests include her best friend Dee, her boyfriend Randall, Cassie's fiancé Greg, Lipowit'z ex wife Samantha, his top nurse Peggy, and his main assistant Victoria.

Long story short, fine champagne being drunk and excellent conversation being had weren't the only activities that transpired on this occasion. Someone was also tragically murdered... Can you say deja vu?

Now, Cassie must spring into action, and race against the clock to solve yet another grisly murder case before her or one of her friends is tossed into the proverbial frying fan!!

Can she work her unique magic again?

I was perusing the free Kindle downloads again the other day, when to my delight I saw that this book was on the list. I thought the first book in the series was okay, and usually second books are better, so why not? Summer is just starting and I hope to have plenty of time to just relax and get in some reading while enjoying the fresh air. So on a lazy Sunday afternoon, while enjoying the breeze on my front porch, I decided to give it a shot.

My first honest reaction? Was this actually the same author who had written the first one? The characters and setting were somewhat familiar. But this installment in the series felt totally rushed and like an editor hadn't had a chance to touch it.

The banter between Cassie and her fiance Greg seemed quite juvenile. Then this detective from Greg's past appears, because another one of Cassie's pastries has killed someone they know. (It's even the same poison as in the first book! Which I don't understand.) Greg and Lorenzo apparently have some kind of a history and have a long, drawn-out pissing match that got pretty annoying. I haven't seen men that age carry on that way. Maybe in college, but not at their age.

The couple is pulled in for questioning and a flashback of sorts takes place. I had a hard time focusing on the beginning of the party flashback because I couldn't get past the fact that Cassie had brought her cat with them to the doctor's party. Who brings their pet cat to a party? And if Cassie, Greg, and Dee weren't really acquainted with the doctor, why were they at his party? Most people don't hang out with their doctors socially, though I know it can happen. I am friends with one of mine, actually. It was all just quite confusing, and the whole thing with Dee's illness and lack of taking her meds popped up again, still feeling like it didn't belong in there.

Cassie goes on her own investigation to try to figure out whodunnit again, and behaves in a relatively typical amateur sleuth fashion. I was also a bit confused by her newfound friend in the secretary at the police precinct, because I had a hard time believing someone in that position would be willing to give up what I thought would be confidential information, especially just for some pastries. A lot of people are willing to give up a lot of goods for sweets.

And this time around, in this book, I did notice the frequency with which the characters are saying "Haha" in their speech. That works well in a text message, email, or social media, when you don't have an emoji at your fingertips to demonstrate that you think something is funny. It falls short in a book when you can describe characters' reactions by showing the story. This falls under telling, and not in the right way. There were also too many mistakes with homonyms and cliches that were clearly not intentional to demonstrate part of a character's personality.

The ending seemed a bit rushed to me. There is also another twist that is loosely related to the story thus far that shows more installments of this series are likely to happen. I think this plot and series definitely has some potential. But this book disappointed me. I would love to see a heavy dose of editing on this one and then recommend it for the future, to really polish this series, because again, I think there is some potential here. I could only give this one two stars.
Posted by Andi at 8:36 PM
Labels: book review, cozy mystery