Welcome to the blurb blitz tour for Eyes Behind Belligerence by K.P. Kollenborn! You can't go wrong with a book about WWII, so I just knew I had to bring this one to you. Please enjoy an excerpt before you download your own copy. Leave comments and questions for the author. And then be sure to follow the tour for even more fun. Plus there's a giveaway! 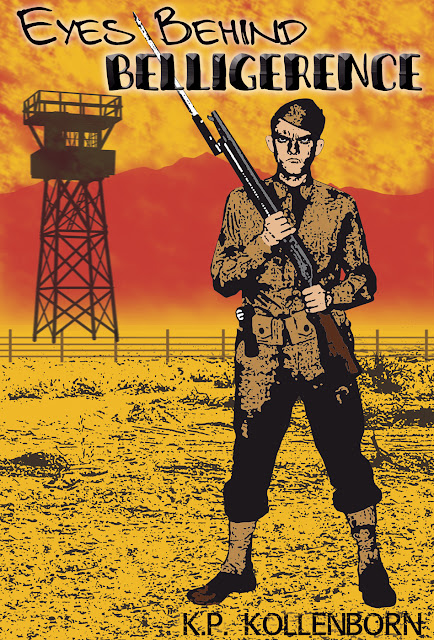 
Told in five parts, this novel unravels the challenges between two unlikely Nisei friends, Jim and Russell, into adulthood during the Second World War. As restrictions are imposed, (even in the safe, rural community of Bainbridge Island,) as harassments escalate, (including the F.B.I. invading their homes and deporting their fathers to Montana for espionage trials,) the fated day arrives: evacuation of all Japanese civilians. Rounded up like cattle, tagged, they are hauled to the fringes of Death Valley: Manzanar. Together they must survive racism, gang violence, and the harsh elements of the environment. Together they must prove their loyalty, especially after a tragic riot on the eve of Pearl Harbor's anniversary. While Russell enlists in a segregated army, becoming part of one the most decorated units in U.S. history, Jim is sent to a different camp for the "No-No" boys: those who are marked disloyal. Removed from their families, they are forced to reevaluate their identities and discover, most importantly, what it means to forgive.

Russell hit the ground, pushing the bottom wire up. Naomi rolled under. He turned to look behind. Tomiko spun around and ran back to the shed.

Horrified, Russell hollered, “What are you doing?”

Naomi grabbed his neck and collar, yanking him forward. His arm snagged on the wire, ripping his favorite sweatshirt. “Guard!” she panted.

Panicking, he fumbled to his feet, scuffling away from the fence. Naomi snatched his hand, pulling, running. He darted across, but tripped and fell near the edge of one of the barracks. For a second, he thought he felt a bullet stab inside his ribs. He looked up. An internal police officer stood in front of him. Blinking and refocusing, he realized the officer was his brother-in-law, Osamu. He carried a flashlight and wore a white patch on his left arm that had “POLICE” painted in black. Dressed in jeans and a brown, corduroy coat, he frowned at Russell and Naomi.

“If I didn’t know any better,” Osamu firmly remarked, “I’d think you two were up to no good.” Crossing his arms and leaning to one side, he maintained, “Care to tell me why the both of you are out of breath?” They didn’t respond. A guilty expression smeared on their faces. “I didn’t think so.” He then peered past the fence to investigate the shed. Russell finally rose, still holding Naomi’s hand. They kept their eyes to the ground. Returning his attention to them, Osamu stated, “You two need to stay clear of the fence. I really don’t want to know what you were doing. Kiotsukete, kudasai. This is a warning. Next time I may not be so nice, Russell. Don’t make me have another conversation with your mother.”

Stunned, Russell and Naomi blinked. They couldn’t leave their friends behind.

Naomi tugged on Russell’s arm, quickly walking away. Panic and guilt drilled inside his chest. He couldn’t believe it. He couldn’t abandon them just like that. Without food or water. Without toiletry. For how long? Until it got dark? Until the camp fell into a deep sleep? What if one of them got bit by a rattler or stung by a scorpion? How could he help his friends? What were Jim and Tomiko going to do for the next eighteen hours? 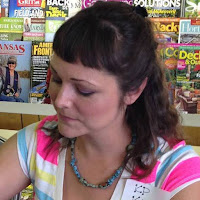 
Currently I have three books published, two historical fiction and one children's book. Although I’ve been writing since childhood, I have a BA in History. I love studying history as much as wanting to evoke stories. I like to believe that after decades worth of introspection we have learned, hopefully more wisely if not conscientiously, what happened yesterday with a critical eye. Aside from a history degree, I also have a graphics art degree. My husband and I once owned a music store, a pizza delivery business, and several internet businesses. I also have dabbled with real estate and am grateful I got the heck out right before the crash! Sadly, history tends to repeat itself in important ways. Currently my family continues to live outside of Kansas City and will always have roots tied to Kansas. I am in the process of working on two more books, another historical fiction and one non-fiction.

K.P. Kollenborn will be awarding a physical copy of Eyes Behind Belligerence to a randomly drawn winner via rafflecopter during the tour.