Her Caprice by Keira Dominguez

Dear historical romance/Regency fans, this one is for you! Please enjoy an excerpt from Her Caprice by Keira Dominguez. Follow the book blast tour for even more excerpts and fun, plus multiple chances to enter the giveaway! 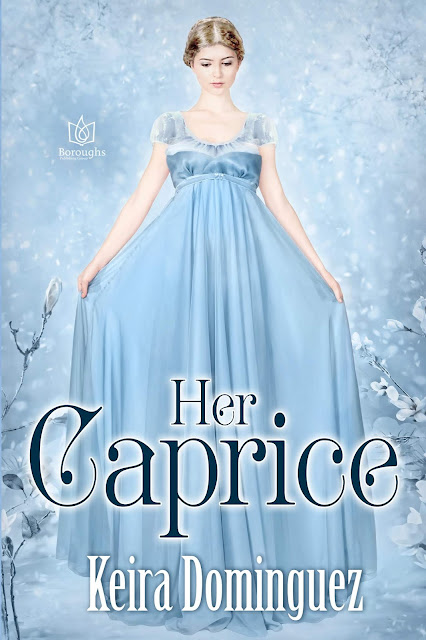 A MOST PRIVATE BATTLE

Since Beatrice Thornton was 13 years old she's been living with a secret that could ruin her family forever. Her parents are the only ones who know, and now, seven years later, they are forced to put on a sham for Beatrice's late first Season. The plan, make Beatrice as mousy and ill-clothed as possible so no suitor would consider her. Then they can all escape back to their country home in Dorset to keep the terrible secret safe. But the unthinkable happens... Beatrice meets a man who gives her hope of a normal life, and Beatrice dares to love with horrible consequences.

Captain Henry Gracechurch has resigned his commission after living through the horrors and waste of war. Recently returned from Spain, he is cajoled by his formidable godmother to make an appearance at one of her famous balls. When he sees a young woman abandoned on the dance floor, honour commands him to save the day. Nothing could have prepared him for meeting the person who is a balm to his soul and gives wings to his heart. But winning Beatrice Thornton will take every ounce of courage he has, and this is a war he will win, no matter the cost.

Lady Sherbourne, her godmama, had introduced them, hissing behind her fan, “The only son of an old duke. Nothing like jumping in with both feet.” And then she had carted Mama off to the card room, leaving Beatrice to get on as best she could.

Lord Knowlton, in turn, had given Beatrice a look like she was a crate of dry goods dropped at the delivery door.

Now, after a truly dreadful dance, he wasn’t even giving her that. Instead, without so much as a bow, he was chasing after a girl whose tiny bodice had been performing heroic, if ultimately futile, work in aid of public decency.

Beatrice looked after him, furrowing her brow, the shock of his rudeness rooting her in place. So little was demanded of the clod—light conversation, a few observations on the weather this time of year and, finally, after they’d both decided they would rather die than be paired off again, he would escort her from the floor and they’d declare it the nicest half-hour either of them had ever spent.

But, no. The slithering reptile was completely gone. She stared after him in bewildered outrage until the sound of the room changed. No music for the moment and no sound of footsteps walking on and off the floor, only a low chatter ebbing away.

Beatrice looked around, the hairs on her arms standing up. She was suddenly alive to the fact that she was the only person conspicuously still on the vast ballroom floor—almost in the centre. She ground her teeth, incandescent with fear and rage, as her face went a telltale red.

How dare London be such a crushing disappointment? How dare it serve up a man who was no better than a… a…? There were no names she could think of that would not be an insult to idiots, vermin, and bastards.

Heads were beginning to swing toward her and Beatrice felt her cheeks turn white, leached of colour. Should she walk backward until she could melt into the crowd or pretend to answer a wave across the room and dash off purposefully? Flying out of the room was hardly possible. The back of her neck prickled and she could feel eyes sweeping around the ballroom, stopping on her lone figure.

If Mama and Papa had allowed her even one visit to the local assembly, she might not be so utterly at sea. Still, Mama would charge to her rescue, if only she could be found. Beatrice stretched her neck and raised herself onto her tiptoes, ready to fabricate an acquaintance over near the tea board—the shame of it making her eyes burn. Blast that man.

In the dreadful silence, she heard a scuffing sound and turned to watch as a soldier in a scarlet uniform broke past the wall of bystanders. He walked toward her, his steps unnaturally loud in the silence. “Thank you for waiting for me,” he called, his voice amused but apologetic, and loud enough to carry to the edge of the floor. “I’ve been looking forward to this set all evening."

He bowed over her hand and whispered a command: “Chin up. Smile like you’re happy to see me.”

Beatrice squeezed this stranger’s fingers, feeling an immediate lightness. Her breath broke as she exhaled, but she was proud of her control. Her lips arranged themselves into the proper shape.

“Good show,” he commended, and the praise warmed her. “Captain Gracechurch, at your service. Your name, miss?” 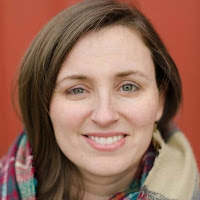 Keira Dominguez graduated from BYU with a B.A. in Humanities and lives in Portland, Oregon with her husband and five children.

For the last decade, she has co-authored The Uncrushable Jersey Dress, a blog and Facebook page dedicated to mid-century author, Betty Neels. Cultivating this corner of fandom confirmed the suspicion that people who like sweet romances are as smart, funny, and are as interesting as readers of any other genre.

When Keira is not busy avoiding volunteerism at her kids’ schools like it is the literal plague, she enjoys scoring a deal at Goodwill, repainting her rooms an unnecessary amount of times, and being seized by sudden enthusiasms.

Keira Dominguez will be awarding $15 in Boroughs Bucks to 2 randomly drawn winners via rafflecopter during the tour.