Welcome to the book blast for Trailblazer by Michelle Diener! Please enjoy an excerpt from this science fiction novel before you download your own copy. Please be sure to leave comments and questions along the way as you follow the tour and then be sure to enter the giveaway! 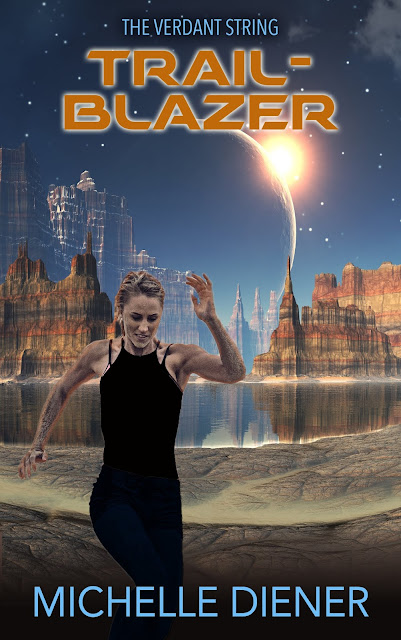 And if they get off-planet alive, she'll have to trust he won't reveal her darkest secret.

Tally Riva is not what she seems, and even she's not happy about it. Infected, invaded, she's not quite sure how to describe it, but on a disastrous mission to a ghost ship, something burrowed its way into her body. Into her mind.

When her commander decides the best cure for what he thinks is Tally's trauma is to send her on the famous Veltos Trail, Tally goes without revealing what's really behind her mental anguish. Anything to be seen as normal again, anything to ignore what she's afraid is happening to her.

But Veltos isn't the safe place it seems. The chosen military personnel lucky enough to be offered the chance to walk the Trail are supposed to be the only people on Veltos. But Ben Guthrie, a captain in Arkhoran Special Forces, knows they're not. He and his team have been on Veltos for a month already, tracking suspicious enemy activity, and he's gone undercover on the Trail in search of a satellite his superiors are sure has been shot down.

When Ben's worst fears become reality, and they find themselves hunted by a cunning enemy through the thick forests of Veltos, Tally and Ben fight together to survive. And Tally has to decide if accepting the changes inside her will save them both, or be her doom.

Ben stood outside to watch the military runner come in.

The flare of the engine was visible because dusk had already fallen and the sky was the indigo blue that shouldn't be unique to Veltos, but somehow was. There was just something special about the color here.

“Nervous?” Irwin stepped out to join him and looked up, following the runner as it fell toward them.

Ben glanced at him, wondering if the guide actively worked to be this annoying, or whether it was just a gift.

“Should I be?” He kept his tone mild.

Irwin glanced at him, shrugged. “Most people are a little nervous to meet their fellow Trail walkers. It's a two week journey, and there's no getting away from anyone who's difficult.”

And certainly no getting away from them if they were the guide.

Ben crossed his arms and watched the runner touch down lightly on the hoverpad a thou away. It was close enough that he could hear the hum of the engine and the silence when it cut off.

“So you never said which warship dropped you off.” Irwin had turned to watch the runner, too.

“Do you Arkhorans actively try to irritate the living shit out of the rest of us, or is it just how you're made?”

Irwin's comment was so similar to what Ben had thought about the guide, he couldn't help the laugh that burst from him.

Michelle Diener writes historical fiction, fantasy and science fiction. Having worked in publishing and IT, she’s now very happy crafting new worlds and interesting characters and wondering which part of the world she can travel to next.

Michelle was born in London, grew up in South Africa and currently lives in Australia with her husband and children. When she’s not writing, or driving her kids from activity to activity, you can find her at her website, or online at Twitter and Facebook.

Michelle Diener will be awarding a $25 Amazon or B/N GC to a randomly drawn winner via rafflecopter during the tour.