Welcome to the blurb blitz for Dream Warrior, the latest historical romance by Bobbi Smith! Today I am sharing an excerpt from you. Please let her know what you think in the comments! And then be sure to follow the rest of the tour for more excerpts and chances to interact with the author, as well as entering the giveaway! 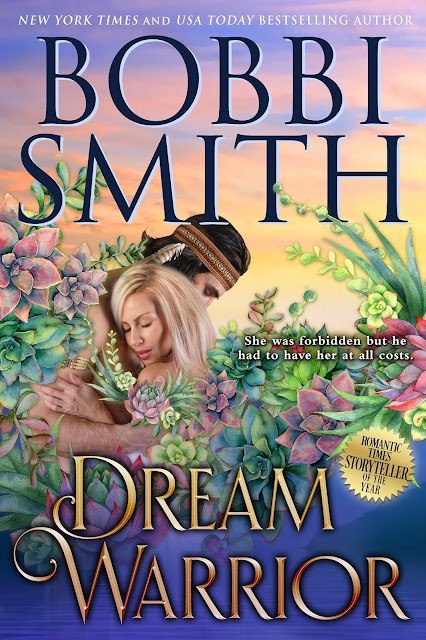 From New York Times and USA TODAY bestselling author Bobbi Smith comes the sizzling story of forbidden love between a proud Indian warrior and the woman he cannot forget—or resist...

THE CONFLICT HE FEELS

For years Silver Wolf had fought against the white blood that flowed through his veins. He was an Indian warrior who would protect his people at all costs. Yet resisting the desire he felt for Cari McCord was a battle he would never win. He had saved Cari from certain death in a blinding Dakota territory blizzard one night. Her beauty mesmerized him and her passion left him yearning for more...

THE WOMAN HE YEARNS FOR

But Cari McCord shared the same beliefs and customs of the men who had brought so much misery to his tribe. She was one of them. How could he ever trust her with his heart and soul? But the more he denies his love for Cari, the more he is drawn to her as he surrenders to a temptation that could set him free—or devastate him forever.

ESCAPE INTO THE WORLD OF HORSES, STEAMY SEX AND BLUE WESTERN SKY.

The horse’s warning whicker and the sound of a twig snapping in the underbrush nearby brought Silver Wolf awake immediately. He wasn’t sure how long he’d been asleep, and he lay still, trying to orient himself. His horse’s restless movements convinced him someone was near, and a sense of foreboding settled over him. As quietly as possible he reached for his gun.

Silver Wolf stopped. “Who are you? What do you want?”

“This is Sheriff Dixon.”

“Sheriff?” He recognized the lawman’s voice and frowned. “What’s going on?” Sitting up slowly, Silver Wolf peered into the darkness.

“We’ve been looking for you for a couple of days now.”

“Why? Has there been trouble?” Silver Wolf demanded, suddenly worried about his people in the village.

Silver Wolf saw the glint of the gun barrels that were pointed at him. “For what?”

“For the murder of James Mc Cord.”

The news jarred him to the depths of his soul. “James is dead?”

One of the deputies gave a harsh laugh. “As if you didn’t know, half-breed. Now get up real slow. We’re taking you in.”

Silver Wolf knew he had no choice. He stood up. “Sheriff Dixon, I haven’t seen James since Saturday night.”

“We know about that. We saw you with his daughter and we know how mad he got—”

“Shut up, Morgan. Go help Collins tie him up.”

Available on Amazon
Should you purchase anything through my affiliate link, I may earn a few pennies at no additional cost to you. I only share those books that I feel will be of interest to my readers. Thank you for supporting my websites!

After working as a department manager for Famous-Barr, and briefly as a clerk at a bookstore, Bobbi Smith gave up on career security and began writing. She sold her first book to Zebra in 1982.

Since then, Bobbi has written over 40 books and 6 novellas. To date, there are more than five million of her novels in print. She has been awarded the prestigious Romantic Times Storyteller of the Year Award and two Career Achievement Awards. Her books have appeared on numerous bestseller lists.

When she's not working on her novels, she is frequently a guest speaker for writer's groups. Bobbi is mother of two sons and resides in St. Charles, Missouri with her husband and three dogs.

Bobbi Smith will award a $10 Amazon/BN GC to a randomly drawn commenter during the tour.