Review of Take a Chance on Me by Kathryn Biel 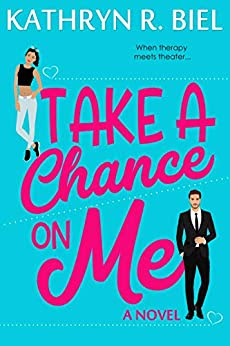 Moving to Hicklam is the last thing Gloria Benedetti wants to do, but it's her final hope at having a normal life. After spending almost a decade as a near recluse and virtually paralyzed by crippling panic attacks, an alternative therapy might be her only shot at regaining her life after trauma. Trauma that forced her to give up everything, including a promising career on the stage.

Staying in Hicklam is the last thing Grayson Keene planned on doing, but The Edison Theater has been in his family for generations, and he can't let it sink on his watch. Unfortunately, things with The Edison have gone from bad to worse, and Grayson needs all the help he can get to save the old girl. He needs one successful season to make things work, and then maybe, just maybe, he can get his life—and his Broadway career—back.

As Gloria's on the verge of the health and healing she's been working toward, the one thing that will save The Edison may just break her once and for all. If she protects herself, it'll cost Grayson everything. This may be the one chance that's too big to take.
Book Links
Goodreads * Amazon
(affiliate link included)
**My thoughts**
I keep hearing about Kathryn Biel's books and have been wanting to take a chance on her for a while. I'm glad I started with this one. While it is your general formulaic romance, it has such a unique twist to it and delves into some much bigger topics that are very rarely discussed in romances. But it does so in a caring and non-stereotypical way that actually subtly educates the reader at the same time.
Gloria is suffering from PTSD from an awful violation that occurred during her college years. And I can't say that I blame her one bit. She's been struggling for a decade, trying to survive, and therapies have not been helping. She comes to town to try out EMDR (Eye Movement Desensitization and Reprocessing) as a sort of last-ditch effort. As she is searching for a job, she ends up meeting Grayson, who has come back home to try to save his family's theatre.
Neither one of them is in the right place to pursue a relationship. They both have tremendous amounts of baggage. Yet at the same time, they are absolutely perfect for each other and have an undeniable chemistry. As they work on improving their personal situations, they also find themselves helping out each other and growing both as individuals and as a team.
I liked Gloria a lot and empathized with her anxiety. Grayson is amazing, and I really felt for him trying to appease his family. Neither one of them is perfect, and that is okay. And I appreciated how Biel approached the mental illness topic. I would like to see more of that in books. While Gloria's case was unique and perhaps a bit extreme, it is still a real issue that we need to talk about.
Thank you to the author for fulfilling my review request. All thoughts and opinions are my own.
Posted by Andi at 4:48 PM