Summer is about to close, but the romance doesn't have to end! Welcome to the blog tour for Canoodling Up North by Shawn M. Verdoni. I have an excerpt for you to enjoy to day. And then you need to be sure to follow the tour so that you can read even more! Leave comments and questions along the way and then enter to win a $25 Amazon/BN gift card! 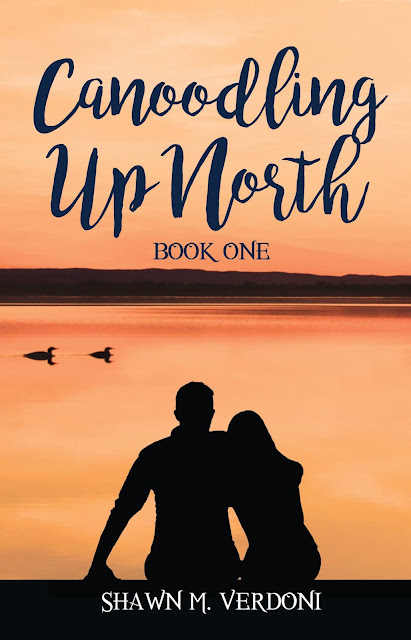 At first glance, Damon MacGregor is living his best life as a bachelor and veterinarian in rural Wisconsin. That is until a wounded crane and an enchanted stranger bring his house-of-cards life crashing down. Not exactly where she expected to be at this time in her life, Catrina “Cat” Carneri has left her dreams in Montana to move back to her hometown where she is nursing a broken heart and working for an ungrateful boss.

A chance encounter at a wildlife rescue changes everything. Cat’s calm and organized demeanor impresses Damon. However, it is how her hair reminds him of autumn and is complimented by her curvaceous figure that beckons him to pull Cat into his arms, claiming her as his own. Damon’s compassion and gregarious personality intrigues Cat. Yet it is his cobalt blue eyes that first capture her heart; so infinite in their depth, she knows the moment he touches her, he takes a hold of her soul.

Soon after forging their passionate bond, a secret from Cat’s past has her facing a difficult decision. If she tells Damon the truth, he may leave or give her the chance to rebuild his trust. If she keeps the secret and Damon finds out, he will leave her forever.

Canoodling Up North is a love story about building fulfilling relationships; fostered in traditional values, confronted by modern complex challenges, while being nurtured by Wisconsin’s natural, cultural, and spiritual beauty.

Damon MacGregor was the kind of man people noticed. Towering at 6-feet 6-inches with a shock of red shaggy hair that melded into a closely trimmed beard and mustache, it was easy to see that he would stand out in a crowd. It also helped that his preference of clothing made him look like a lumberjack most of the time; jeans, brown work boots, and a plaid cotton shirt during spring and summer switched to flannel in the fall and winter. Damon took up space when he entered a room because of his broad shoulders and muscular thighs that showed through his jeans. He didn’t deliberately wear tight jeans; it was just that he always found it difficult to find jeans long and wide enough to fit his build, and he wasn’t about to spend an obscene amount of money on clothes that he could easily buy at a big box store.

As much as his appearance screamed, “Notice me!!!” he had other features that were just as intoxicating. Against his creamy white skin and shocking red hair, his ice-blue eyes were striking. A person could look at them and feel like they were looking out into an immense ocean, the color so crystal clear that you could see to the bottom. Just above his beard line lay another surprise. When Damon smiled or laughed, twin dimples appeared in his apple cheeks.

With her eyes still closed, Cat tried to clear her head. However, being a firstborn child, that was hard to do. Always trying to pay attention to the details, always trying to be the best, always trying to be perfect took a toll on her in more ways than one. At least she granted herself this moment to not do anything or be there for anyone else. This was her time and her time alone. She deserved it. She deserved to not do anything at all. Though she was no longer a kid, in Marshall’s eyes she would always be one, and therefore the one and only rule for Loon Lake, “kids rule,” was guaranteed to Cat if she came to the cabin to visit.

After her sun-kissed meditation, Cat squinted her eyes open and looked at the sky. If she had to guess, it was getting close to dinnertime. She felt something prickly on her leg and looked down. A pale-blue dragonfly with black wings had landed on her thigh. For such a beautiful creature, she was surprised at how coarse their legs felt on her skin. Cat smiled, noticing how the dragonfly’s coloring matched her swimsuit. She wondered if the suit attracted it to her. Since no one was around, Cat talked to the dragonfly as if it could understand her. “Hello, Mr. Dragonfly! I want to thank you for eating up the mosquitoes up here.

Shawn M. Verdoni is the author of Canoodling Up North: Book One, Canoodling Out West: Book Two, and is working on her third book. She attended UW Whitewater for her degree in secondary education and is currently attending MSOE to complete her Master’s in Business Administration. Her best days are spent with her husband, two children and two dogs just hanging out. She loves living in Wisconsin, especially in fall when you can find her in a pumpkin patch or an apple orchard collecting tart baking apples for her famous crumble crust apple pie.

Web site: http://shawnverdoni.com/
Shawn M. Verdoni will be awarding a $25 Amazon or B/N GC to a randomly drawn winner via rafflecopter during the tour.
a Rafflecopter giveaway
Posted by Andi at 3:00 AM