Welcome to the Secret Spice Cafe! Author Patricia V. Davis is here today to share her trilogy with us plus answer 13 special questions. The number 13 is very important! You can follow the tour to learn even more. Please feel free to ask the author more questions along the way. Enter the giveaway for a $25 gift card! And stay tuned, because I'll be reviewing the first book, Cooking for Ghosts, in a couple of weeks! 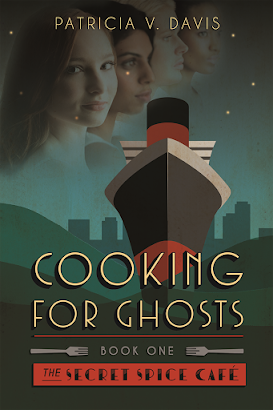 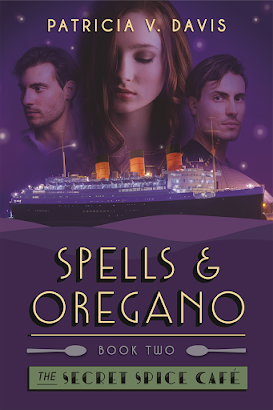 An Official Pulpwood Queens Book Club Selection, and read by Ann Marie Gideon, COOKING FOR GHOSTS is an unforgettable tale of love, redemption, and divine female power.
Buy on Amazon 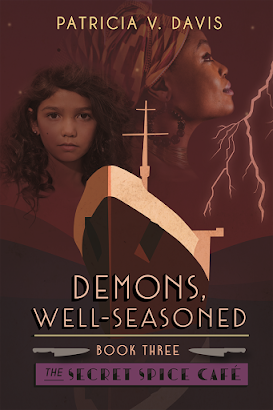 Dare to Believe in Your Power...

A long-lost grandmother. A stay-at-home mom. A comic book fan. A five-year-old girl with a star-shaped birthmark. And nine more.

The cast is bigger, the stakes are higher. When Sarita's grandmother, a Vodou priestess, foresees a terrible evil, Cynthia, Jane, Angela, and Rohini reunite on a heart-rending mission to save all that's precious to them, including the iconic ship, the RMS Queen Mary. They cannot do it alone--the priestess tells them there must be thirteen on the night of the thirteenth moon. in this life-or-death pursuit. Yet, can she be trusted?

Spiced with history and the supernatural, Demons, Well-Seasoned takes us from 1930s Glasgow, to New Orleans and Harlem in the 1950s, to present day southern California, and back again, on a metaphysical voyage that is both exhilarating and poignant. But before you embark upon this final sail with the denizens of The Secret Spice, be warned: expect to lose sleep, and keep tissues at hand. These valiant characters might just stay with you long after their story comes to a close.

The rain was beastly. It blackened the sky. Like a serpent, it sprang from the pavements, coiled around potholes, and slithered along the road’s perimeters. But when it hit the car windows, it fell like tears, the tears of the inconsolable, the tears the Queen hid in her heart.

They were almost there. The most arduous part of the journey, the five-hour train ride from Ballater, was over. They were only six miles from Clydebank, thereabouts, and that was a mercy. She was exhausted already, and apprehensive about speaking in public for the first time. Not to a small gathering, moreover. She’d been told to expect an audience of two hundred thousand at least. That number had her clenching her gloved hand in her lap. Nerves and worry crawled and bumped around inside her in the same way the black Daimler limousine crawled and bumped over the drenched cobblestones and grooved steel tram tracks of Glasgow Road.

Her role was to maintain an air of serenity and confidence, so she kept her jitters to herself. It would be unthinkable to her to voice them aloud, which was just as well, as no one else shared her mood.

Certainly not today. Despite the wet gloom saturating the shoes and clothing of the endless thread of men, women, and children who stood four and five deep on both sides of the streets, their expressions were jubilant as they waved to the Royal motorcade going by. And George, sitting beside her, waved back proudly. As he should do. As he deserved to do.

He’d saved them all. 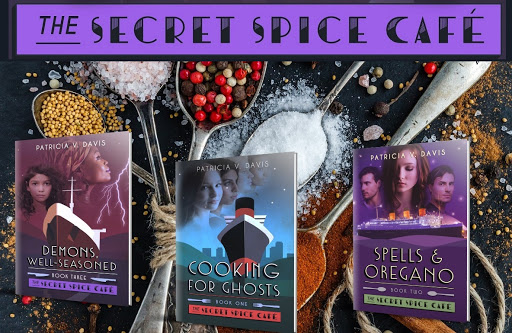 ******************************************
13 Questions for Patricia V. Davis
(Including a question about the Number “13”)
1. Why do some spirits appear as corporeal while others are translucent?
The opacity issue is addressed in the dialogue. In the world of the three novels, the spirits who died aboard the Queen Mary can appear as they did in life. Gina’s the only spirit who has trouble staying ‘solid’ if you will, because technically, she has no business haunting the ship, as she didn’t die aboard.
2. Makes sense. But, in Spells and Oregano, there was one character in particular who looked really scary. Why? (No spoilers here.)
What happens to that character in Cooking for Ghosts brings so many elements of the plot forward, but she has such a sad experience, that it just broke my heart to leave it that way, even though she was only a very minor character. So she returns as a powerhouse.
3. Would you say that Gina lied when she said that Sarita was in danger?
I’d say Gina knew that Luca needed to be aboard that ship.
4. The women suspect the perpetrator, but dismiss their concerns. Why?
The women tamp down on that thought because that’s what we women do all the time. We’re so afraid of making a fuss, of making others feel uncomfortable. We’ve been trained that way. Women have been killed in real life because they didn’t want to speak up about someone they perceived as a threat.
5. In Cooking for Ghosts, Jane argues with the others about hiring Cristiano, and walks off when she loses that argument. In Spells and Oregano, Cristiano argues with the others about hiring Luca, and walks off when he loses that argument. Just a coincidence?
I’m glad you noticed. I wrote it that way deliberately. I wanted there to be that comparison. I thought it was a fun way to introduce the ‘guy stuff’ going on with Cris that wasn’t present in the first novel, wherein he was mostly the Byronic hero.
6. In Demons, Well-Seasoned, your descriptions of Haitian Vodou (Voodoo) are very different than what we see in shows like American Horror Story.
Hollywood makes a mockery of it. I went to New Orleans to interview two practitioners. It’s so sad that many people don’t know that there’s so much beauty and history to Vodou.
7. Why is the heading for Chapter 13 in all three novels in the series the only one not written out?
It’s because the ghosts reveal themselves in that chapter. Also, the number “13” is a significant one in the ship’s history, as we discover. That’s why I told you to come up with thirteen questions.
8. Fun. I didn’t know that was why, and it was hard to come up with just thirteen. Here’s the next: What’s the significance of the seagulls?
In Spells and Oregano, Sarita mentions that seagulls “mate for life.” When I found myself writing about Cris and Rohini walking along the shore as they uncovered some hidden problems in their marriage, I put two seagulls in the background as a metaphor.
9. Nice. What’s the most interesting research you did for this series?
Talking to ship aficionados was fun. They’re so passionate about their subject. Talking to a Vodou priestess, to David Copperfield, was amazing. But I think the most unique research for the series was asking an acquaintance who was staying aboard the Queen Mary to time how long it took to fill up the bathtub in her suite with her in it.
10. Was talking like a magician one of the things you spoke with David Copperfield about?
David and I spoke primarily about the time-consuming, vital, and grueling details of creating a successful performance. But as far as the silly things Santi and Luca say during their act — that was all derived from Francis C. Hill’s 1910 resource book for magicians, A Half Hour of Magic.
11. Was David Copperfield your inspiration for Luca and Santi?
Apart from their striking looks and their success, no. The inspiration for them comes from a different source, which will remain anonymous. In many ways, Luca and Santi could be the same person, except that their life experiences, their individual talents, their unique perceptions of certain events, brought out different things in each brother. Even their names have similar meaning: Luca means “light” and Santi means “saint.”
12. You love to give your characters names with significant meaning. In your Author’s Notes you make mention of some. Any you left out that you’d like to share?
Let’s see — ‘Dr. Menville’ was named after Bruce Willis’s character in Death Becomes Her. Angela’s ‘Uncle Nunzio’ is named after an old friend’s cheating ex-boyfriend. It was gratifying naming him and visualizing him down there at the bottom of the ocean “swimming with the fishes.”
13. Ah … that’s scary, but okay. So, which character are you most like?
I think I share traits with all, but if I had to choose only one, I’m most like Gina. She’s short, Sicilian, and hot-tempered, so a no-brainer.
_______________________________________________________
Fun Quiz: Which Cooking for Ghosts Character Are You Most Like? Take the test at the link and find out: https://www.gotoquiz.com/which_cooking_for_ghosts_character_are_you_mo 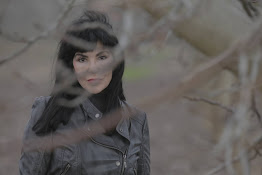 PATRICIA V. DAVIS's debut novel series, THE SECRET SPICE CAFE, is comprised of three books: COOKING FOR GHOSTS (2016) SPELLS AND OREGANO (2017) and DEMONS, WELL-SEASONED. (2019) The audio books will be released in 2020 by Tantor Media, and narrated by Ann Marie Gideon. Patricia lives with her husband, who is both a poker player and a rice farmer, so she divides her time between southern Nevada and northern California. Say hello to Patricia at her author website: www.TheSecretSpice.com

Wikipedia: https://en.wikipedia.org/wiki/Patricia_V._Davis
The author is giving away a $25 Amazon/BN gift card. Follow the tour for more chances to win!
a Rafflecopter giveaway
Posted by Andi at 3:30 AM
Labels: book excerpt, book promo, giveaway, Goddess Fish, paranormal