Welcome to the book blast tour for Never Say Chai by Kirsten Weiss! You can always count on her to bring some of the quirkiest characters and situations you have ever read to her cozy mysteries. I have an excerpt for you to enjoy, plus further thoughts on the story. Be sure to let her know what you think in the comments section as you follow the tour. And as always, best of luck entering the giveaway! 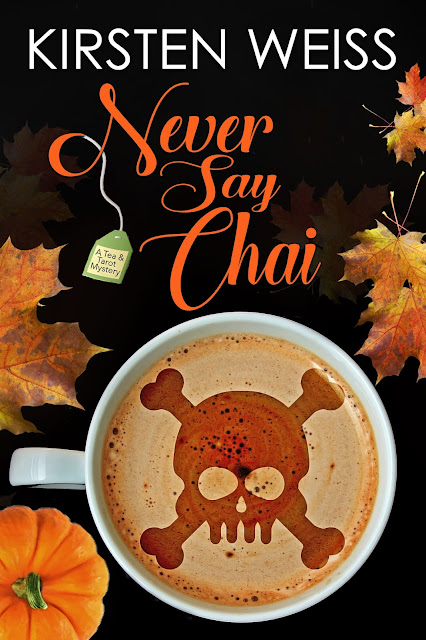 It’s Halloween season in small town San Borromeo, and Abigail and Hyperion are determined to make Beanblossom’s Tea & Tarot spooktacular. But when Hyperion’s boyfriend, Detective Tony Chase, is arrested at Beanblossom’s for murder, the duo is certain someone’s playing a nasty trick. And when the official investigation turns into a witch hunt, the stakes to unearth the truth are raised…

But a clever killer has plans to squash their investigation… and the two amateur detectives. If they don’t solve this puzzle—and fast—it will be out of the cauldron and into the fire for them both.

Never Say Chai is the fourth book in the Tea and Tarot cozy mystery series. A fast-paced and funny cozy mystery, packed with quirky characters, pets, and murder! Perfect for fans of Jana DeLeon, Janet Evanovich, and Donna Andrews. Buy the book and start this hilarious caper!

Tearoom recipes in the back of the book!
Read an excerpt:

There are some things that should go without saying. For example, don’t leave a coffin in your business partner’s driveway. It’s just not done.

But there was a coffin in my driveway. And it had wheels. I looked from the black coffin to the yellow bungalow. Yep, it was my house. Just above the peaked roofline, fog blurred a watery sun.

“Do you have any idea why there’s a coffin in my driveway?” Because there was really only one person who would put one there. I tore my gaze from the wooden coffin to Hyperion. “And why is it on wheels?”

He shifted his weight. “Didn’t I mention the coffin race?”

“Why’d you think I had a t-shirt cannon?”

“I still have no idea why you’ve got one.”

“For the coffin race.” He patted the coffin’s hood.

“I entered Beanblossom’s in the race,” he said patiently. “We’re going as the Death card. I’ve got a scythe and everything.”

“A scythe at high speeds. What could go wrong?”

“It’ll be like in one of those Italian medieval morality parades. Did you know those parades most likely spawned the Tarot’s major arcana cards?”

“Or was it the Renaissance?” He shook his head. “They were in Italy. I know that much.”

Buy Links:
Amazon * Apple Books * Nook * Google Play * Kobo *
**My thoughts**
"Do you have any idea why there's a coffin in my driveway?...And why is it on wheels?"
Only in a Kirsten Weiss cozy mystery are you going to have such questions asked. This fourth installment in the Tea and Tarot series brings back beloved quirky characters and zany situations that keep you completely glued to the Kindle screen while you're reading. I loved being back at the tea room and seeing how they were going to prove that Hyperion's boyfriend Tony, a policeman, was being framed for murder. And I dare you to read this without cracking a few smiles, and maybe a few fun eye rolls.
It may be the fourth book in the series, but what I like is that you can dive into this series and read this one as a standalone. Though I will tell you that you're going to want to go back and read the others for fun. Now that Halloween is in the air, though, this is a great time to read this one.
Bonus points for recipes in the back of the book! I am loving this new trend in books.
Thank you to the author and Goddess Fish for the requested review copy. All thoughts and opinions are my own.

Amazon bestselling author Kirsten Weiss writes laugh-out-loud, page-turning mysteries. Her heroines aren’t perfect, but they’re smart, they struggle, and they succeed. Kirsten writes in a house high on a hill in the Colorado woods and occasionally ventures out for wine and chocolate. Or for a visit to the local pie shop. Kirsten is best known for her Wits’ End, Perfectly Proper Paranormal Museum, and Tea & Tarot cozy mystery books. So if you like funny, action-packed mysteries with complicated heroines, just turn the page…

Bookbub: www.bookbub.com/authors/kirsten-weiss
Kirsten Weiss will be awarding a $10 Amazon or B/N GC to a randomly drawn winner via rafflecopter during the tour.
a Rafflecopter giveaway
Posted by Andi at 4:00 AM
Labels: book excerpt, book promo, cozy mystery, giveaway, Goddess Fish