Welcome to the book tour for Blank: Madam Doesn't Like That by Zhanna Hamilton. Read an excerpt from this installment and find out how the author envisions this as a TV show. Follow the tour for even more and let the author know your thoughts along the way. Best of luck entering the giveaway! 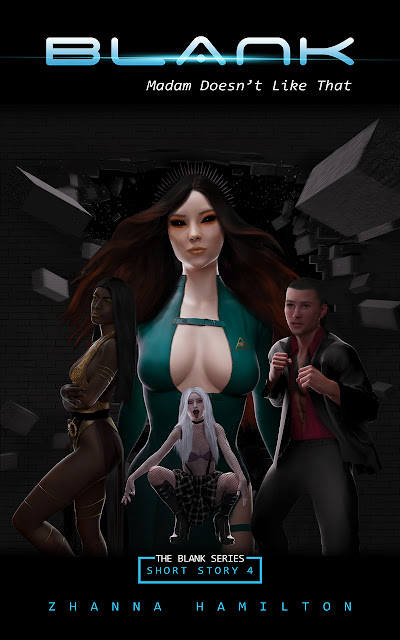 The Blank Series blurb:
A former human turned military spy bot escapes the oppressive Solar Government, leaving behind a secret that turns order into chaos. Now, she’s being hunted.
Blurb for Blank: Madam Doesn't Like That (Short Story 4 of The Blank Series):
An unexpected visit from sex bots turns into a secret mission with deadly consequences.
Read an excerpt:

There, on the grey bricks of a side street building was a graffitied image of blue hair and red lips. The first image bots see when they contract the Code. A look cloned by thousands who swore they were the real Blank.

He went somewhere in his mind, searching for a memory of her. A happy one. They all seemed sad now.

He looked away from the wall--but he couldn’t escape her. The farther they went, the more propaganda popped up. Painted on windows. Wrapped around poles. Scribbled on sidewalks.

BLANK IS AN ALIEN! BLANK IS A LIE! BLANK SHAPESHIFTS! LONG LIVE BLANK! WHO IS BLANK?

Zen met his eyes in the rearview mirror.

He wanted to forget. To leave her behind as anonymous wall art.

It might come as no surprise that Scarlett Johansson would be asked to play Blank, the former human turned military spy bot who escapes the totalitarian Solar Government. Her looks inspired the cover illustrations of this character, and since she’s no stranger to science fiction roles--she’d be an impressive renegade spy bot. Cara Delevingne would be a close second as the fiery look in her eyes captures Swain’s rage.

The actress who’d play this bot would need to convey a stoic, sensual and slightly intimidating vibe. Model Duckie Thot would be a great fit.

Razor is a bot that is very in touch with her wild side. The actress would need to be comfortable playing a provocative and uninhibited character. Either Emma Stone or Amanda Seyfried could pull this off and make it look fun.

Tez is another bot who leads with her sexuality and gravitates towards risqué behavior. Malu Trevejo would bring this character to life in an exciting way!


The Neon Twins (Nia and Nara)

These twin bots are thrill-seeking and innocently curious. Mikako Tabe and Erika Toda would portray a lively duo. Some CGI would be needed to make them look like actual twins.

Madam Opia, the Supreme Leader of the Solar Government, is a harsh ruler with ruthless tactics. She’d need to be portrayed by an actress who could tap into the darker side of human nature. Charlize Theron has already perfected this archetype throughout her career and would be a flawless fit.

How about Cate Shortland as the director and Brian Grazer as the producer? I see it as a winning combination with infinite potential.


I hope as you follow along with The Blank Series on Wattpad, you can now imagine the characters in their cyberpunk world with ease. Or create your own cast. With an unlimited imaginary budget, why not?

About the author:
Zhanna Hamilton is a science fiction writer and the creator of The Blank Series. In May 2019, she released the first installment of the scifi series on Wattpad, “Blank: Begin Again,” which has been named in the top 100 list of femme fatale stories and chosen as an “Undiscovered Stories” Wattpad Pick on the independent storytelling platform--home to 90 million readers worldwide. Readers and future readers can follow Hamilton on Twitter at www.twitter.com/ZhannaHamilton.
Zhanna Hamilton will be awarding a $75 Amazon or Barnes and Noble GC to a randomly drawn winner via rafflecopter during the tour.
a Rafflecopter giveaway
Posted by Andi at 3:30 AM