Buckle up for this wild ride that is a true story and based on a screenplay. Read an excerpt from Origen: True Story of Evil and then a guest post by Peter Perry about his journey to becoming a writer. Follow the tour for even more and leave your questions and comments along the way. Best of luck entering the giveaway! 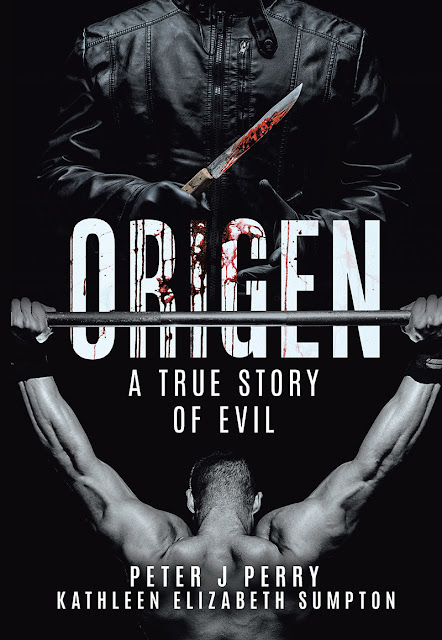 Have you ever come face to face with the devil? In a tapestry of sports, business, and dating, there is an evil presence that is not quite visible to anyone: The Bedroom Strangler. A serial killer that scales fifteen storey buildings, enters through the balcony, and stealthily slithers under the bedroom bed, with the sole intent of raping and murdering innocent women in their sleep. He has been classified as the worst serial killer in Ontario history and Canada's most dangerous criminal ever, operating at the height of London's 40 year serial killer period, from 1974 - 1978.

The Bedroom Strangler is a member of a gym. It is the same gym the protagonist managed during the 1970's. Members of the gym trained and worked out together, never knowing their friend's true nature. In fact, Mike even introduced the killer to a female member friend at a gym party, a woman who lived in the same building as the murderer; a woman who would become his last victim. As a result of unprecedented tactics by police, Mike ends up becoming part of the investigation—but will he be able to stop this evil predator? It took 40 years to write this story and it's important to remember that this story is being told by someone who was there.

Origen: A True Story of Evil truly began when Mike's real-life persona, Peter J. Perry, was just 17 years old. At the time, he was just a student of St. Mary's College in Sault St. Marie who would carry out heated discussions with a priest, Father Lawlor, about the existence of the devil. Father Lawlor tells him that one day he might meet someone so evil, he will surely know the devil exists, and maybe he will do some good by it. And we will. Part of the proceeds of this novel are being contributed to good causes to respect both the victims and Father Lawlor.

The novel's title reflects a belief about the dynamic forms of energy as Origen believed that demons can take human form and humans can also be demonized. What follows is inspired by true events. All the names of characters have been changed and many of the events happened, although not all.

This painting of the gym scene, the dating scene, the underground fighting martial arts scene, the psychiatric scene, and Origen's beliefs may cause you to rethink the devil. If you dare to read the contents of this book, you can come to your own conclusion: Is there more to evil than what we think?

Based on an original screenplay by Peter Perry and Geoff Hart.

Property of the Origen Foundation Inc.

He locks the door to his office and heads for the sauna. He sees Claire finishing her exercise class and waves at her. She waves back. As Mike walks past the window, Claire tunes in to a breaking news report on a television that is mounted above on the wall. Everyone in the class stops to watch the report, too.

Claire reads the tagline on the newsfeed detailing some kind of murder investigation.

“The victim was strangled in her bedroom with friends just outside her door. There appears to be evidence of indignity to the body and may be the work of a serial killer. Police are considering a link to previous cases where the death has been made to look accidental or natural. This is the first case where…”

Claire stops to pay closer attention, but the news switches to some other story. Claire quickly moves over to the television and starts switching channels to find more on the story she just heard. There is nothing. What is going on? She wonders. The class resumes in chit-chat, loud whispers, and long-faces.

ORIGEN PURCHASE LINKS
AMAZON.COM * AMAZON.CA * KINDLE * BARNES & NOBLE * BOOK DEPOSITORY * SMASHWORDS * APPLE BOOKS
Your journey to becoming a writer
Deciding to become a writer ... is a decision to pursue the perfect part time career. You are your own boss. You set your own hours. There's no commute. Your office is always just seconds away. There's little to no investment. You don't need to locate resources, file permits, or tie up collateral.

The only real resource required, is your imagination, and your personal experiences.

The downside of becoming a writer is that the learning curve required to do the job takes practice and a lot of trial and error. Unlike other part time jobs, there may be very little compensation until you master the craft. It's also difficult, much more difficult, than most people realize.

Writing utilizes a key muscle. The brain. Just like any muscle, the brain can improve with exercise. There are right ways and wrong ways to exercise. Just like with weight lifting, the most productive method, is short duration workouts on some kind of schedule. Write for two hours a day. Read for two hours a day. Once that becomes effortless, write for three hours a day. Your brain grows a little stronger each time you use it. Before long, the desire to go vacuum the living room every time you sit down to write, goes away. Soon all the distractions that cause speed bumps in your writing, simply vanish. It's the same with weight lifting. The one hundred pound bench press you couldn't accomplish when you first started, can now be done repeatedly, without much effort at all.

What if a writer is getting on in years and their imagination isn't what it used to be?

We all grow older. But as we age we undergo a tradeoff. Our imagination lessens but our experiences have grown exponentially. The messages you wished to convey may not have been clear in your twenties, but they're clear now. With experience comes wisdom. That's why I decided to write Origen. I needed to let others know about my experience, in the hopes that, perhaps, some good would come from it.

So if inclined to write, please invoke your imagination and share your experiences. The decision to do so may be the perfect, part time career that has been waiting for you.

Peter founded Peter Perry Insurance Agency LTD in 1978 and is still the operating president. The company is a London-based insurance and investment brokerage specializing in RRSPs, tax-free savings accounts, segregated funds, tax shelters, RRIFs & LIFs, creditor proofing, annuities, educational savings plans, GICs, and Mortgage insurances. Being a certified and award-winning independent brokerage allows Peter to custom-tailor financial portfolios to suit the specific needs of the client and easily make amendments as one journeys through the various stages of their life. Peter’s acclaimed background in health and fitness as a drug-free world & Canadian powerlifting champion makes him particularly mindful of retirement, health and long-term planning and incorporating all aspects of life into the advice he provides his clients. Click here to learn more about Peter’s athletic accomplishments.

Some interesting facts about Peter are that he was born in Toronto but grew up in Sault Ste. Marie. He became a St. Mary’s Knight due to his academics and sports and is a graduate of St. Mary’s College in Sault Ste. Marie. He was the manager of Vic Tanny’s gym from 1974 to 1978 before launching his insurance company and beginning a new career path.


KATHLEEN ELIZABETH SUMPTON is an advocate for the arts and often works with languages. With a passion for culture and a focus on communications, she is an Author. Poet, and Communications Professional with a primary focus on writing. She has a working background in fourteen different languages.

Her five-year plan is to secure two master’s degrees in English and business, followed by a PhD in English, while running her freelance business.

Her 10-year goal is to publish novels and other works in the genre of satire in order to strengthen communications locally and globally by discussing the proper use of language and terminology.

Her work brings awareness to large societal issues such as the criminal justice system, substance abuse, and mental health, a variety of topics everyone else is too afraid to talk about.

As a representative for members of the community as well as for her own projects, Kathleen hopes to enrich her surroundings with both the beauty and power writing holds. It is now her personal mission in life to provide meaning and entice insight through literature. When she is not busy with her work, you can find Kathleen enjoying the outdoors or spending time with family. Favourite hobbies are working out and people-watching. She operates out of Southern Ontario.

GOODREADS - ORIGEN https://www.goodreads.com/book/show/58330394-origen
Peter Perry and Kathleen Sumpton will be awarding a $15 Amazon or Barnes and Noble GC to a randomly drawn winner via rafflecopter during the tour.
a Rafflecopter giveaway
Posted by Andi at 3:00 AM
Labels: book excerpt, book promo, crime, giveaway, Goddess Fish, guest post, nonfiction