Reading A to Z: V is for Vonnegut

Kurt Vonnegut is probably one of my all-time favorite authors. I first had to read him in high school. And no, it wasn't Slaughterhouse Five. In fact, I didn't read that until I was almost 30 years old. We read Breakfast of Champions and Cat's Cradle in a philosophy class that I took my senior year. On my own, I decided to check out more of his books.

One of my favorites is Player Piano. It was his first novel. It is about technology and automation taking over industry and replacing people as workers and the effects of it all. It was written nearly 60 years ago. When you read it, you cannot help but to notice some of the parallels beginning to form in today's society.

I am also really partial to Mother Night for some reason. Howard Campbell is a playwright who ends up becoming a Nazi propagandist. He has no idea what kind of information it is that he sends out on the radio. Eventually he is caught and arrested for being a spy. Later he moves to New York City where eventually he is found out again. White supremacists want him to join their efforts. Instead, he turns himself in to the Israelis and undergoes trial. It's interesting and I have read it a few times. This is also the only Vonnegut book that was in my parents' house the day that Kurt died. I was home visiting for Spring Break that week. I was also spending my week in Hospice with my great uncle who died a few days later. I think that experience is another reason this book has stuck with me.

One of the other things that draws me to Vonnegut's work is the familiarity of his settings. He grew up in Indiana, so many stories take place there. I grew up in Ohio and had family in Indiana. Other books take place in Upstate New York, where I currently live. Vonnegut even spent some time teaching at Ithaca College. You can feel his presence when you visit bookstores down there. Here in Rochester, we have an old cemetery called Mt. Hope Cemetery. Many famous people are buried here, including Frederick Douglass and Susan B. Anthony. A slightly lesser-known famous person is Edward R. Crone, Jr. He was an old friend of Vonnegut's and the inspiration for the character of Billy Pilgrim in Slaughterhouse Five. The Man and I went on a pilgrimage one day to locate this gravestone. 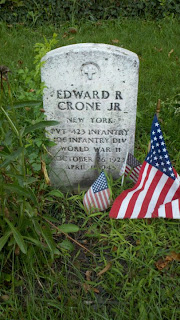 Photo copyright Andrea Coventry
To know that my favorite author had stood in this very spot to pay homage to his beloved friend was an awe-inspiring thing. You could almost feel his presence there. I had chills.
Vonnegut wrote several other short stories and novels. I haven't yet read them all, but I believe I own them all. I almost don't want to finish reading them, because once they are over, there will be nothing new left to read. That makes me kind of sad in a way. So, The Man and I spend our time hunting for vintage Vonnegut books, since we can't really find any new ones. I have quite the collection, now, and love it. I almost feel like Mel Gibson in Conspiracy Theory. He couldn't walk past a copy of Catcher in the Rye without buying it. I have a hard time passing up vintage copies of Vonnegut's works.
Posted by Andi at 12:59 PM
Labels: A to Z Challenge 2012, Vonnegut