Cover Reveal! 'Justice For All (A Rawley Family Novel)' by Olivia Hardin 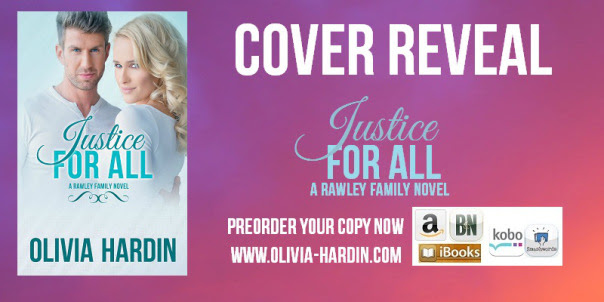 Kay Rawley has plans. She might be the second child of an earl, but she wants a life away from her father’s estate in New Durma. She wants a life apart from her family’s name. Becoming a lawyer was a bright, shiny object she just couldn’t resist grabbing. Her classes are complete, and all she has to do is pass the bar to get permanent employment at the Dallas law firm where she’s been interning for the past year.

Kay’s been on Audrick Van Buren’s radar since the day she walked into his classroom two years ago. That admiration only grew when she came to work for his firm. But if there’s anything he recognizes, it’s a woman who’s driven–and Kay is definitely one. It’s all he can do to keep his distance and allow her the chance to come into her own. What Van doesn’t know is that someone else is watching Kay, too, and if he doesn’t step between them, that person might not only derail her career but threaten her very life.

Things aren’t always what they seem, and Kay’s about to learn that the best laid plans are so much better when they go astray.

And if you haven’t read All for Hope (A Rawley Family Novel) you can get it for just 99 cents for a limited time!

When Olivia Hardin started having movie-like dreams in her teens, she had no choice but to begin putting them to paper. Before long, the writing bug had bitten her, and she knew she wanted to be a published author. Several rejections plus a little bit of life later, she was temporarily “cured” of the urge to write. That is, until she met a group of talented and fabulous writers who gave her the direction and encouragement she needed to get lost in the words again.

Olivia has attended three different universities over the years and toyed with majors in Computer Technology, English, History and Geology. Then one day she heard the term “road scholar,”’ and she knew that was what she wanted to be. Now she “studies” anything and everything just for the joy of learning. She’s also an insatiable crafter who only completes about 1 out of 5 projects, a jogger who hates to run, and she’s sometimes accused of being artistic.

. . .and finally, subscribe to her special events Newsletter for the chance to win prizes and get sneak previews of books!
Posted by Andi at 2:48 PM