Review of 'Do It With Words: Regrow Your Hair With Your Mind' by Kfir Luzzatto 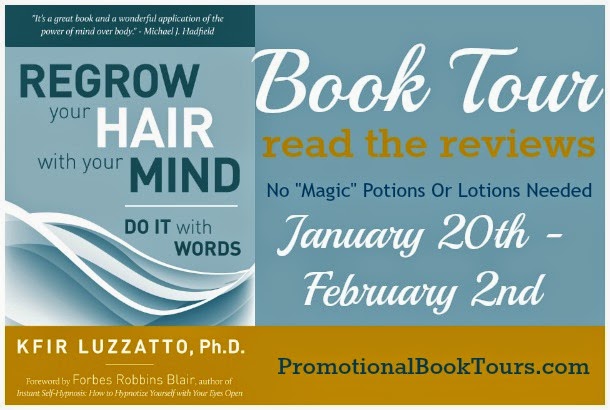 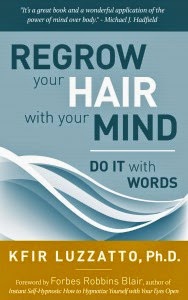 Do It With Words – No “Magic” Potions Or Lotions Needed

Do It With Words is a straightforward guide into the power of your mind. The author, a former skeptic, who reformed after witnessing how mind-body practices deliver tangible results, provides visual proof and a precise blueprint of the mind-body experiment in which he succeeded in his attempt to regrow lost hair and to restore its natural color to gray hair.

The book describes in precise detail how the author:

Regrew lost hair; restored its natural, dark brown color to his previously white hair;used self-hypnosis, guided imagery and meditation to achieve all results without the aid of any external preparation.

“It’s a wonderful application of something that I have believed in for many years now – the power of mind over body . . . This technique is worthy of serious attention.” – Michael J. Hadfield, D. Hyp., MBSCH

“Kfir Luzzatto . . . has laid down a path for you to reach many goals traditionally considered difficult or impossible. I see Kfir as very much a visionary pioneer in the mind-body field. We are fortunate to read what he has discovered and reveals . . .” – Forbes Robbins Blair

When I first saw the title of this book, I wanted to just blow it off as absolute nonsense. I decided to give it a shot, anyway. It wasn't a total waste of my time.

Kfir has a Ph.D. He is no stranger to doing research, and his book demonstrates this. He has put together a comprehensive approach to using your mind to do great things within the mind-body connection. While the focus is on regrowing hair, or even changing your hair color, he does tell how you can apply these concepts to many different aspects of your life.

He provides a detailed description of how he has gone through this process, as well as an outline to follow should you wish to try this technique on your own. He explains the need to believe in what you are doing and to be careful in how you approach it. He cites many sources, as well as sharing his own experiences.

Within these experiences, he has included photographs of the changes within his own hair. My only wish is that he would have done the two pictures in a similar setting. The picture of his white, balding head looks like it was done outside in the bright sunlight, whereas the one that shows the darker hair growing in was done inside in artificial light. A true comparison would be more effective if both had been one or the other.

Does the program work? I can't vouch for that. I have a head full of hair that is still 97 percent its natural brown. I have never tried guided meditation, nor other procedures discussed in this book, but I have had some experience with what we might call mind power. I have known people who use guided imagery to get them through painful experiences, such as cysts or during chemotherapy. There could be something valid there.

Am I going to try it? Perhaps on some level I will give it a shot. I figure I have nothing to lose.

So, kudos to Kfir for having strong faith in what he is doing. I am impressed by his research and synthesizing of the material into a useful guide. I wish anyone who tries this process a lot of luck. I was born and raised in Italy, and moved to Israel as a teenager. I acquired my love for the English language from my father, a former U.S. soldier and WWII veteran, a voracious reader, and a prolific writer. I have a PhD in chemical engineering and I work as a patent attorney. I am a recipient of the prestigious Landau Award for Research and have been granted several patents for my own inventions. I live in Omer, Israel, with my full-time partner, Esther, our four children, Michal, Lilach, Tamar, and Yonatan, and the dog Elvis.
I published extensively in the professional and general press over the years. For almost four years I wrote a weekly “Patents” column in Globes (Israel’s financial newspaper). My non-fiction book, The World of Patents, was published in 2002 by Globes Press. I am the author of several short stories and of six novels. I am an HWA (Horror Writers Association) and ITW (International Thriller Writers) member and I also serve on the editorial board of The Harrow Press as Anthology Editor.
I became interested in mind-body practices a few years ago, after witnessing how my son got rid of a persistent viral wart with guided imagery. How I decided to initiate the ambitious experiment that finally led me to regrow lost hair and to turn the clock back on my hair age, restoring the original color to it, is a long story that unfolds in the book.
Follow Kfir:
https://twitter.com/#%21/KfirLuzzatto” target=”_blank”>Twitter / Facebook / Literary Addicts / Smashwords / Blog / Amazon / Goodreads
Follow the tour!