From #1 New York Times bestselling author Christopher Pike comes a brand-new fascinating and seductive new novel about a girl with a mysterious ability—but one that carries an unimaginable cost.

From the moment Fred meets Aja, he knows she’s different. She’s pretty, soft-spoken, shy—yet seems to radiate an unusual peace. Fred quickly finds himself falling in love with her.

Then strange things begin to happen around Aja. A riot breaks out that Aja is able to stop by merely speaking a few words. A friend of Fred’s suffers a serious head injury and has a miraculous recovery.

Yet Aja swears she has done nothing.

Unfortunately, Fred is not the only one who notices Aja’s unique gifts. As more and more people begin to question who Aja is and what she can do, she’s soon in grave danger. Because none of them truly understands the source of Aja’s precious abilities—or their devastating cost.

Love Aja or hate her—you will never forget her.

In Strange Girl, #1 bestselling author Christopher Pike has created the rarest of novels—a love story that swings between a heart-pounding mystery and a stirring mystical journey. 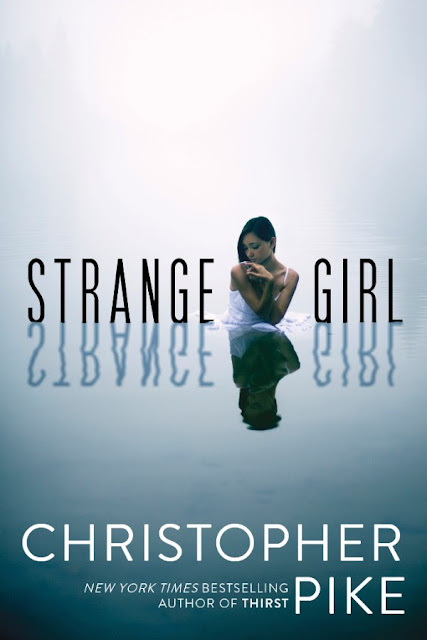 It was four in the morning when I heard the soft knock on our motel door. I appeared to be the only one who heard it.

Nearby, Janet and Shelly slept soundly on one bed, while on the other Dale lay like a dead man as Mike snored loudly. At the knock, I sat up on my foldout bed. I didn’t mind rollaways. If I was tired enough, I could sleep on the floor. Pulling on my pants over the gym shorts I’d been sleeping in, I slipped from beneath the sheets and answered the door.

“Hi,” Aja said and smiled. She had on the same dress she’d worn to the Roadhouse. Her hair was wet, though, as if she’d just showered, and her feet were bare. I saw no car. I assumed she’d walked over from her own nearby motel or hotel.

“This is a surprise,” I said. It was so good to see her I feared I might still be asleep, dreaming the whole thing up. “What are you doing here?”

I glanced at my friends; they were still out. “Give me a second, let me find my shoes and a shirt,” I said.

Minutes later we were strolling along the cracked edge of an asphalt road beside a twenty-foot fence, topped with barbed wire, that surrounded the base. The town was silent as Elder usually was at this time of morning. There wasn’t a soul in sight.
The air was heavy with moisture and the ground was damp; clouds had chased away the stars. It made me wonder if it had been raining and if that was the real reason Aja’s hair was wet. Had she been wandering around in the dark since we’d last seen her? I asked and she nodded.


“Are you nuts?” I said. “You should have hooked up with us hours ago.”

She shrugged. “You were playing and the place was noisy. Besides, I like to take walks late at night.” She glanced over. “You look surprised.”

“I’m surprised you’re here. What made you come?”

“You invited me to hear you play. You remember?”

“Sure. How did you get here? Did Bart bring you?”

“Why didn’t you come with us?”

“I wanted to surprise you.”

“Let me get this straight. You rode here all alone, across half the state, with only the clothes on your back. And since we last saw you at the Roadhouse, you’ve been wandering around in the dark—barefoot—in a strange town all by yourself.”

“What part are you saying no to?”

“What about your shoes?”

“I brought shoes. But I got tired of wearing them.” She added, “They’re sitting on the hood of your RV.”

“Well, that’s a relief. You’ve got your shoes to protect you. Honestly, Aja, you can’t behave like this, not in this country. You’re too pretty a girl. Anything could happen to you.”

“Anything can happen,” she appeared to agree, before adding, “Don’t worry about me.”

I shook my head. “I do worry about you.”

“Because . . . maybe where you come from it’s safe to wan¬der around at night. But this can be a violent town. You saw those guys at the club. They were ready to kill Mike and Dale.” When Aja didn’t respond I looked over at her. “But they didn’t because you showed up. How did you get them to stop?”

“I didn’t do anything. They were afraid, that’s all. They didn’t want to hurt anybody. And when they understood that, everything was okay.”

I shook my head. “If Shelly had stood on that table instead of you and begged that drunken herd to calm down, they would have beaten the shit out of her. What you did was amazing.”

“I can’t be in danger one minute and amazing the next. You have to make up your mind.”

She had a point, sort of. I was contradicting myself. Not that she still wasn’t acting naive. “What I mean is . . . ,” I began.

She interrupted by reaching over and taking my hand. “I liked when you sang by yourself at the beginning,” she said.

Her hand felt good in mine. “You were there at the start? I didn’t see you.”

“Yes. At first you were nervous, then you relaxed.” She added as if to herself, “You enjoy singing in front of people.”

For such a naive girl, I thought, she was perceptive.

“It must have made you mad getting expelled on your second day of school.”

“It doesn’t matter. I’ll be there Monday.”

I shook my head. “I can’t understand why Billard hates you.”

“We met over the summer.”

“At the town cemetery. I often walk there.”

“What happened at the cemetery?”

Aja hesitated. “Better you ask her.”

“She’ll explain.”
I pushed Aja to elaborate but she just shook her head and kept walking. I finally decided to shut my mouth and enjoy the touch of her hand, which was remarkably soothing. I don’t know how far we’d walked when I noticed that I was feeling awfully energized for a guy who hadn’t really slept in two days. More, I felt light, light as a balloon, as if I wasn’t walking but floating alongside the fence. And the clouds in the sky, they felt somehow closer, like I could touch them.

Aja suddenly stopped and faced me, her big, brown eyes bright in the dark night. She reached up and stroked my cheek, my hair, and even though I did my best to stay cool I trembled. She inched up on her toes and kissed me on the lips, just for a second or two.

Aja shook her head and tightened her grip on my hand. She began to lead me back the way we’d come. “I want to sleep with you in the RV.”
I don’t recall much about the walk back. But I do remember lying beside her on the cushions in the rear of the RV, our two bodies barely fitting between the crush of our equipment. We didn’t have sex—we didn’t even make out, nor did she kiss me again.

But she held me and let me hold her and for the first time in my life I felt as if all my hidden fears had been deftly exposed and quietly put to bed, once and for all. I had fought with her that it wasn’t safe to wander alone in the dark, but when I slept with her cheek resting on mine, and felt the brush of her eyelashes as they fluttered during her dreams, I was the one who felt protected.

I have been a Christopher Pike fan for the past 30 years, from the very beginning of his career. I admit that I have been remiss in keeping up with newer releases in recent years, but have continued to reread some of the older titles. Therefore, I was very excited when this opportunity came about to read his newest book.

When I started it, I found that I was reading it in the old Christopher Pike mindset. This wasn't the same type of book that I readily devoured in my younger years. I had to retrain my brain to just read the book for what it was and to let go of any preconceived notions of the author. I also had to remind myself that it has now been a few decades. Everyone grows, changes, and matures over time. And then I was able to settle into the book and enjoy the ride.

The story of Aja isn't exactly the most original. That mystical girl who entrances and heals is one that I have seen again and again. Yet, this story was unique in its own ways, thanks to the characters surrounding her and I still read it quickly.

I wanted to get to know Aja better. I know she was meant to be mysterious, but I still had some questions for her! I was also trying to figure out more of how she fit in with these people and their relationships. In some ways I felt like her story was just beginning just as it had to end, yet I know we weren't meant to know any more than we get to know.

Fred was a little difficult for me to relate to; I just never completely connected. The story is told from his perspective in the first-person. That did give us insight into Fred's thoughts and feelings, and thus his character. He did remind me of people I knew once upon a time when I was closer to that age. Sometimes, though, I felt like he was older than a senior in high school. I honestly had him more pegged as being around 20.

We were introduced to other characters through the book, but I didn't feel like I really got to know any of them, either. Granted, the story was more centered around Fred and Aja. I can almost see some of them getting their own spinoff story, though, which would then allow us to get to know them better.

I still read this book primarily in one sitting on New Year's Day. I like the spiritual aspect of it and Pike's introduction to new-to-me philosophical ideas. The message and lessons are good ones and can provide some food for thought.

I do have an increased desire to go back and read some of the others that I have missed, as well as revisiting my old favorites. This may not be the type of book that my generation associates with the name Christopher Pike, but it is still a worthwhile read that I enjoyed.

Christopher Pike is a bestselling author of young adult novels. The Thirst series, The Secret of Ka, and the Remember Me and Alosha trilogies are some of his favorite titles. He is also the author of several adult novels, including Sati and The Season of Passage.

Thirst and Alosha are slated to be released as feature films. Pike currently lives in Santa Barbara, where it is rumored he never leaves his house.
Posted by Andi at 5:13 PM