Review of Can't Stop the Music by C.D. Hersh with Giveaway

Welcome to the review tour for Can't Stop the Music by C.D. Hersh. It's the second book in a series that revolves around the idea of a soul mate tree, published by Soul Mate Publishing. Here you'll have the chance to read an excerpt as well as my thoughts about this unique story. Then you can leave a comment for the authors here and along the book tour as well as enter the giveaway for a $10 gift card. Please note that you will find affiliate links within this post. Should you make a purchase through one, I may earn a small commission to support my websites. Also note that while I did receive a complimentary copy of this book for the purposes of reviewing, this did not alter my thoughts and I am sharing my honest opinions. Thanks for checking it out! 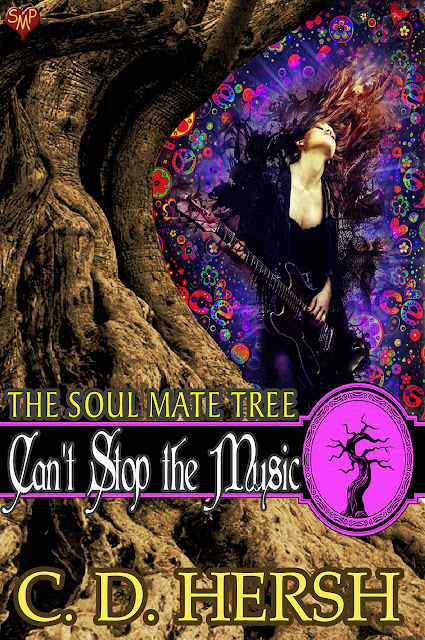 Jammed highways, food shortages, and rainstorms can’t stop the music when hippies Rose and Dakota hear the melody of love at the 1969 Woodstock Music Festival. Or can it? When a jealous wannabe girlfriend and misunderstandings drive them apart, the couple loses track of one another in the massive crowd. Will they find each other again, or live lives of missed opportunities?

“I shouldn’t have let you talk me into burning my bra last night.” Rose glanced at Willow, envying her pert A-cups. You couldn’t tell Willow’s girls were unchained. “Even that thin layer would have kept the sweat off. Bra burning might be the rage right now, and that’s fine for someone built like you. For C-cups or bigger, loose boobs are a drag. Pun intended.”

Willow laughed. “You’ll get used to it. Once you do, you’ll see the advantage.”

So far the only thing her hippie friend introduced her to that she’d embraced was the shortened flower name Willow had given her.

“Rosemary’s the name of your grandmother, not a flower child. I’m renaming you Rose,” Willow had said.

Jake and Starr, the other two in their group, came around the side of the Woodie. Jake’s tangled curls looked as if he’d just rolled out of bed. Grass stuck out of Starr’s hair in a green corona. She doubted they’d been doing anything that merited halos.

Frowning, she slid off the hood, motioned Starr over, and began picking grass from her braids. “I hope you two weren’t cavorting in poison ivy. I don’t think we packed any anti-itch lotion.”

“You should cavort sometime, Rose.” Starr gave her a friendly shove. “You need to loosen up, girl. Partake of free love.”

She couldn’t get used to free love either. “No thanks.”

I was born a decade too late for Woodstock, but that doesn't mean that I can't appreciate the music. I fondly snuck my dad's Woodstock records and finally dubbed them onto a cassette tape so that I could listen to the magic whenever I wanted to, without risking getting in trouble for accidentally ruining his beloved records. Stories of the magic that ensued over those three days have contributed to all kinds of fantasies about what it would have been like to have been there and found love. There's also that romantic notion of finding your soul mate and love lasting forever. This book seeks to combine those two fantastical ideas.

I will say that reading the portion of the book taking place in Woodstock, it did feel like more of a story based on research as opposed to having actually been there. But I loved the descriptions of the music and the vibes. I am very much like Rose and easily get swept up in the magic of music. She was at the concert to enjoy the music, putting more stock in that than all of the free love and carefree sex. I would have been the same way. I need my music like I need oxygen. And that lineup would have been a helluva breath of fresh air.

Rose hangs around the perimeter of the concert, suffering from severe claustrophobia. As she does so, she gets to experience some of that magical music and also learns about the pros and cons of some of those free love choices. She also comes across a magical tree that sings a song of faith and love in the form of a soul mate. It makes her a promise and then she meets Dakota.

Unbeknownst to her, he sees the same tree and hears the same promise, but fate separates the two of them for an extended period of time. The story becomes one of fate and second chances. Both of them have moved on in that decade and have to reconcile their pasts and presents in order to pave the way for their future. They also have to have faith in that serendipitous reunion and idea of soul mates. It's not an easy road that they must travel to find their way to each other.

It's an interesting concept for a story that you aren't going to necessarily run across again any time soon. There's a definite sense of fantasy. It's not a book that is going to make your heart pound and cause the windows to steam up as you read. It also makes some interesting commentary on the history of music and the problems with trying to rewrite history to fit your own needs, instead of taking it for what it is and learning from it. I was able to read it in just a couple of hours.

Putting words and stories on paper is second nature to co-authors C.D. Hersh. They’ve written separately since they were teenagers and discovered their unique, collaborative abilities in the mid-90s. As high school sweethearts and husband and wife, Catherine and Donald believe in true love and happily ever after.

The books of their paranormal romance series entitled The Turning Stone Chronicles are available on Amazon. They also have a short Christmas story, Kissing Santa, in a Christmas anthology titled Sizzle in the Snow: Soul Mate Christmas Collection, with seven other authors.

They are looking forward to many years of co-authoring and book sales, and a lifetime of happily-ever-after endings on the page and in real life.

C.D. Hersh will be awarding a $10 Amazon or Barnes and Noble GC to a randomly drawn winner via rafflecopter during the tour. Follow the tour for more chances to win!