Review of Storm Within by Cerian Hebert

Welcome to the review tour for The Storm Within by Cerian Hebert. It's the 11th book in the Soul Mate Tree series, and probably my favorite one of all that I have read to date. Please enjoy an excerpt and my review. Follow the book tour to find out what others had to say about this book. Leave Cerian your comments and questions along the way. Best of luck entering the giveaway! 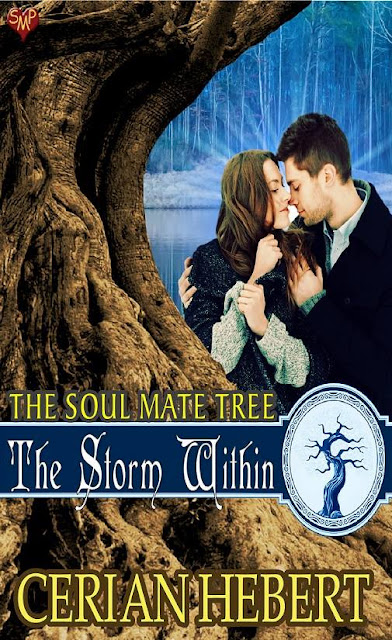 Healed from her own loss, Juliana Hopkins wants nothing more than to mend reclusive artist Aidan Byrne’s heart, and help close a chapter in his life that has haunted him for over twenty years. Risking their newfound love, Juliana is determined to release the ghosts he can’t let go.

Aidan has been in love with Juliana since the first moment he saw her, but if she can’t leave the tragedies of his past alone, he won’t be able to make a life with her.

She offers him a love he never dared to want, but loving her could rip open all the old wounds he’d never been able to heal.

Her husband’s name was ripped from her throat, twisted up with the sound of metal crushing around them. Juliana fought to grab on to anything as the car tumbled like a child’s toy, an endless somersault. She wanted to close her eyes, but the sight of Todd’s limp body, flung back and forth, held her horrified attention. Blood from the gash on his head splattered across her face.

Before his name could leave her lips, Juliana sat up in bed, her fingers clutching the sheets around her body in a death grip until the sensation of being thrown around subsided, and the sight of Todd’s broken body faded to black.

“It’s just a dream,” she whispered.

When she swallowed—too hard—her throat hurt, as if she’d screamed it raw. She probably had. Over the past year she’d woken this way more often than not.

A dream, but based on reality.

And she relived it over and over again.

Juliana eased her hold on the sheet and ran a hand over the empty side of the bed where Todd used to sleep. For five blissful years they’d shared this bed, had planned on sharing it for another sixty or more.

Fate had different plans for them.

Her eyes adjusted to the darkness, and now the room filled with moonlight and a green glow from the clock on the table next to her bed. She focused on the numbers on the display. Midnight. Again.

**My thoughts**
I think this one is my favorite out of all of the Soul Mate Tree books that I have read. I think it's because while it has the fantasy element of the Soul Mate Tree bringing together two lovers destined to be together, it's also more of a contemporary romance, which is definitely my favorite kind to read. But that's the great thing about this series - there's something for everyone.

We start out meeting Juliana in the midst of a nightmare reliving her husband Todd's death in a car accident that she managed to survive. She isn't able to move on, and understandably so. But of course he doesn't want her to live the rest of her life pining away. She encounters him at the infamous tree on a walk one night and he gives her permission to move forward. Flash forward another year and she has done so.

Then we meet Aidan as he is trying to make his way home during a nasty snowstorm. He ends up spinning out of control at the base of Juliana's driveway. She saves him for the first time in this story.

The two of them are already familiar with each other from afar. They have a mutual attraction, but have never had the chance to explore it. Being snowed in during a nasty ice storm allows that connection to come to fruition, and quite quickly, just like it has always been meant to be.

As they explore their newfound love and connection, they share their tragic pasts with each other. Both of them have been horribly hurt, and they are able to save each other, in a sense, from that horrific pain. Revealing the past, though, inspires Juliana to take further steps to save Aidan again as she engages her past as a newspaper reporter to find out the truth about his past. And therein lies your conflict for this new relationship, as he would prefer to let sleeping dogs lie. But I have to say I can't blame her for wanting to help. And when you find out his tragic story, you'll also want her to pursue it.

You can pretty much figure out what's going to happen in this story, and it comes to a satisfying conclusion for this series. But there is definitely more to the story and I wish it would have continued just a little bit longer to bring this particular story to a further conclusion. Perhaps there can be a sequel to it outside of this series? I know other books are set in worlds outside of this series as well. I want more of these two! 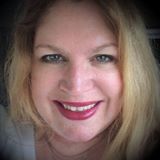 Originally from Minnesota, Cerian is currently settled in southwestern New Hampshire with her husband and two of her four children plus a dog, cat and two geckos. She's known she wanted to write since she was twelve, and between mucking stalls in New York and booking cruises in Maine, she's been filling notebooks and flash drives with her stories in pursuit of her dreams.

Currently she has 10 published books (No Going Back, Where One Road Leads, The Staying Kind, Going Going Gone, and The Storm Within from Soul Mate Publishing, and The Better Man, Do Overs, Finally Home, Light The Way Home, and That Kind of Magic self-published at Amazon). She’s looking forward to adding to this list.

Cerian Hebert will be awarding a $10 Amazon GC to a randomly drawn winner via rafflecopter during the tour.